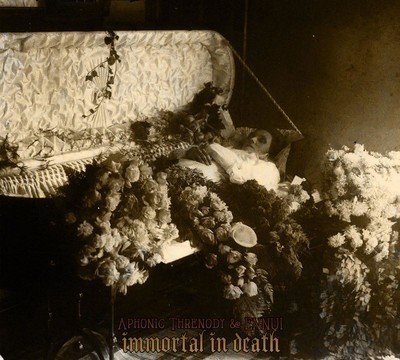 Aphonic Threnody, the new international band with Gallow God member Riccardo Veronese and members of Urna, Pantheist and Leecher, joins the Georgian revelation ENNUI in one of the most powerful split albums of 2014. 2 tracks and over 40 minutes of Funeral Death Doom published on a high quality 150 copies handnumbered DgPack version. This is something you wanna have in your collection next to the brand new album from ENNUI - recently out under MFL Records - and the upcoming Aphonic Threnody second album "When Death Comes". A must for all the Funeral Doom fans! Don't miss out!" Recorded on December 2013. Mixed and mastered at 322 Studios. (p) 2014 GSProductions. (c) 2014 Aphonic Threnody / Ennui. __________ Limited edition of 150 hand-numbered copies. Packaging: 2-fold digipak.