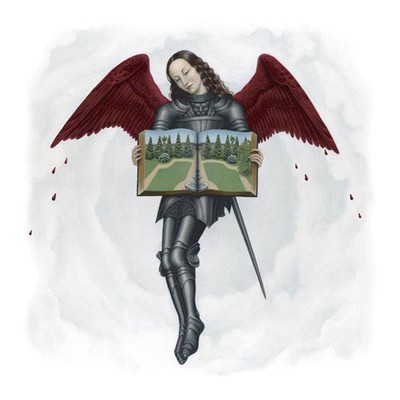 "Scott Kelly and I have been friends for ten years. Even though in that decade his life often played out like a protagonist from a particularly relentless Greek tragedy, I assure you he is flesh and blood. It seems only fitting that the latest outing to come from the extremely prolific Neurosis/Tribes of Neurot clan should be this disarmingly mortal release from Blood and Time entitled At The Foot Of The Garden. Scott Kelly and Neurosis bandmate, Noah Landis, with help from Anthony Nelson, have created a staggering, stark work that will survive long after their forms are reduced to dust. It seems to me that this was evident to them and weighed heavily in the process of creating this record. At The Foot Of The Garden is remarkable for its honesty alone. It is so deeply personal that it makes one a bit uncomfortable. Like all things Neurosis, it is a amazingly dark without being pretentious. It is heavy without sonic volume. The ten songs here fumble naked through darkened corridors and beg to be heard. Each note plods along moving inch by inch towards your heart, not terribly unlike the band's name... Blood and Time. These songs are more like confessions, and whispered secrets, songs that are years of profound sorrow slowly exhaling as Scott Kelly settles into what will be the rest of his life. That makes this record comforting after being uncomfortable. After watching Neurosis mature over the years, Blood and Time just seems to fit into the equation. A moving testament to human endurance and humility. "