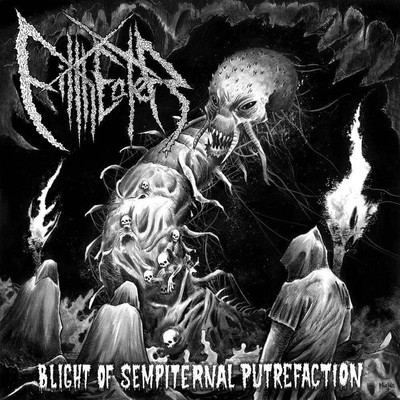 The atrocious debut full-length by this U.S. based band. Filtheater began back in 2010 when founder and sole member K.J.'s bands dissipated. This led to the exploration of the abysmal, primal, stripped-down Death Metal that he had worshiped as a teen, spewed forth by bands such as Incantation, Phlegm, Grave, Entety, Rottrevore, Baphomet, Autopsy, Nuclear Death, Embalmer, Goreaphobia and Corpus Rottus. Unable to find like-minded musicians in Mississippi, K.J. went on to write and perform all aspects of the music, releasing several EP's over the next three years. Then in 2018, three like-minded maniacs (C.E., R.S. and A.W.) were added to the lineup in order to fully flesh out the band's ancient and primitive sound, and keep the utter disgust going. And indeed, utter disgust is all you'll find on Blight of Sempiternal Putrefaction! Aptly titled, Filtheater's debut album unleashes undulating waves of filth and foulness, an unyielding and cruel cascade of garbage and grime that simply refuses to be washed off. Raw and eldritch is their Death Metal, with no "modern" seasonings/neuterings: simply, lurch 'n' crunch with palpitating plunges into blastbeaten speed. Death Metal for Death Metal maniacs, no more but certainly no less. Prepare to be crushed under the weight of filthy and dismal Mississippi Death Metal! With fittingly foul cover art by Mörtuus and disgusting mastering by Dan Lowndes, Blight of Sempiternal Putrefaction is guaranteed to live up to its title, and then some!