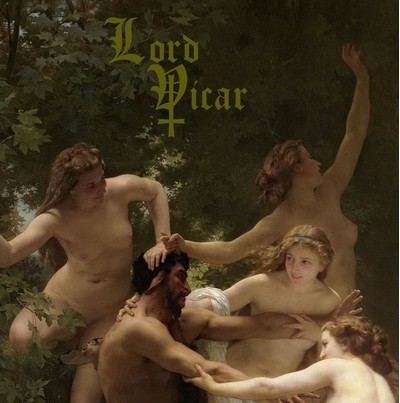 he Gates of Flesh is the third album from Lord Vicar. It was recorded by audio wizard Joona Lukala at Noise for Fiction studio in Turku, Finland, in the Autumn of 2015. The studio had the benefit of a huge live room which gave the band the opportunity to capture a sound that breathes with the ambience of the space, but maintains the sonic weight for which they are rightly known. The tracking of the album was undertaken by the core of the band – Kimi, Gareth and the legendary Lord Chritus, with bass duties being split between Kimi and Gareth. Sami is not featured on the album but has been taking care of bass for live shows. Deliberately shorter than previous albums, the band sought to concentrate their trademark heaviness into shorter, punchier songs and fit the album onto a single vinyl LP. The result is an album that the band consider their most focused and intense release to date. Whilst this is definitely not a concept album, there is a loose lyrical theme relating to the pleasures and weaknesses of the flesh. Musically and lyrically the album covers a wide spectrum of textures from the fragile beauty of ‘A Woman Out Of Snow’ to the oppressive menace of ‘Leper, Leper’, with subtle details that reveal themselves to the listener with each subsequent listen. Mirror, it surely cannot lie to me This must be what’s left to see I can’t turn away… Due to miscommunication between the label and the pressing plant, all CD copies play as one song. Recorded, mixed, mastered between October 2015 and January 2016 Era Vulgaris. Guitar solos and harmonies were recorded under the influence of the full Moon.