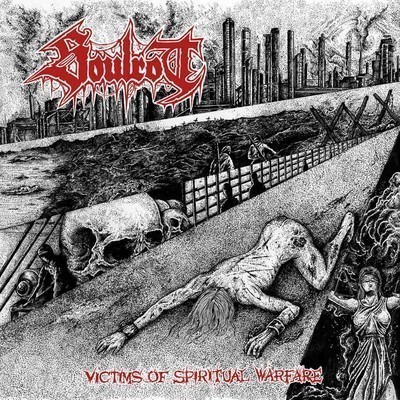 The highly anticipated 2nd full-length of this Chilean band. Hailing from the city of Valparaíso, Soulrot was formed by guitar player JL Olmos (Betrayed, ex-Micosis, ex-Gangrenous) circa 1993-1994 but was put to rest due to JL being involved in several other projects at the time. It wasn't until 2013 that JL joined bass player/vocalist JH Wilschrey (Sadistic Murder, Acero Letal) and they both resuscitated Soulrot, manifesting their unquestionable inclination towards the Death Metal of yore. This glorious, gangrenous resurrection resulted in the "Horrors from Beyond" demo in 2014 and the "Revelations" EP two years later. However, come 2017 did Soulrot finally released their first full-length, "Nameless Hideous Manifestations", through Death-Metal-of-yore stronghold Memento Mori. Bolstered by the addition of Daniel Fredes (Sadistic Murder) on drums, Soulrot stuck to their guns -a lyrical inclination toward H.P. Lovecraft's cosmogony and the preternatural, and musically inspired by old acts such as Nihilist/Entombed, Carnage, Autopsy, Grave, Necrony, Demigod, Traumatic, Carcass, Nirvana 2002 and Asphyx among others- but here exhibited a bulldozing sense of purpose, a crush-at-all-costs momentum teleported from 1992. And that bulldozer continues its crush unabated with Soulrot's second album, "Victims of Spiritual Warfare". Utterly gutsfucked as the previous album was, "Victims of Spiritual Warfare" sees Soulrot upping the urgency and delivering a tone literally worth dying for -if the teleportation stopped at '92 for "Nameless Hideous Manifestations", then this one's going no further than 1991! Soulrot somehow pull off the trick of being both rawer and more refined here, their songcraft broadening its scope -more patience, more doom, more crush- whilst tastefully unloading quick-hitting bursts of blistering Grindcore, altogether still sounding like the same band. But let it be known that this is still classic Death fucken Metal, same as it ever was, and always will be with Soulrot. Unbelievers will continue to roll their eyes at the familiarity, but just like they did on their debut album, with "Victims of Spiritual Warfare" do Soulrot utterly convince with their authenticity and passion. If you don't "get it", then you don't know Death Metal! Graced with stark cover artwork by Cesar Valladares and another molten mastering job by the esteemed Javier Felez at Moontower Studios, "Victims of Spiritual Warfare" could very well be their Indecent and Obscene, You'll Never See..., or even Harmony Corruption!