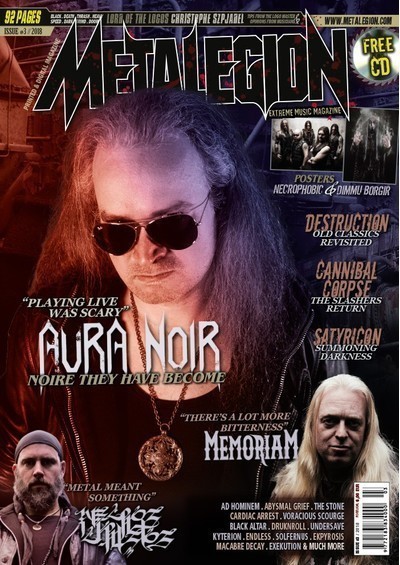 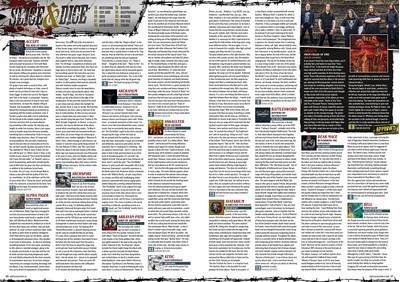 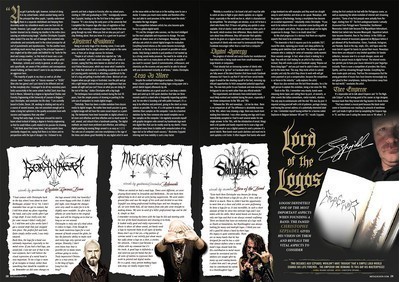 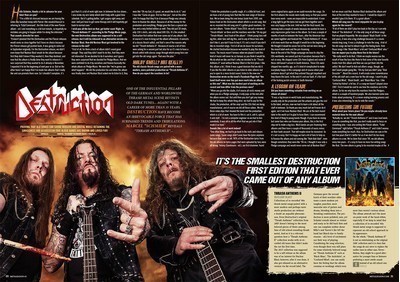 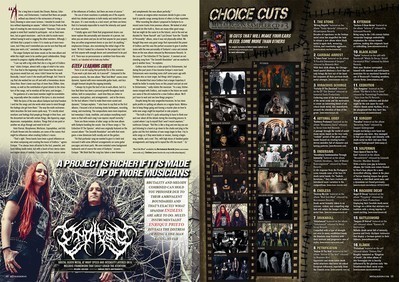 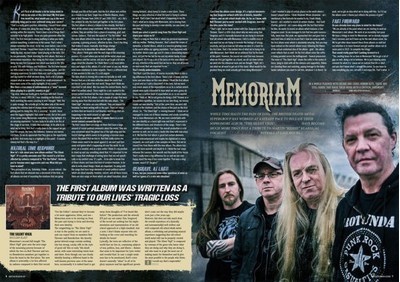 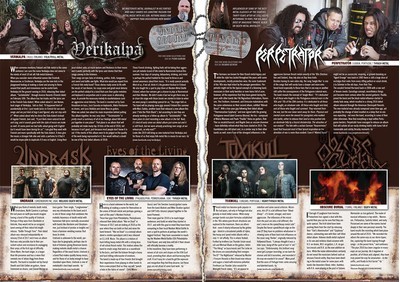 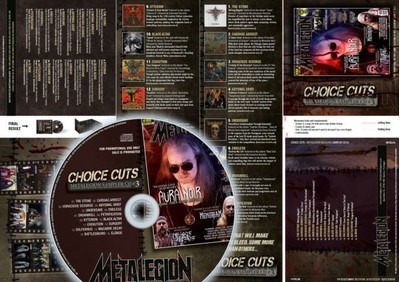 Highlights on this issue range from features with some of the top acts of the metal scene, like Aura Noir, Memoriam, Destruction, Cannibal Corpse or Satyricon but also covering underground gems like Necros Christos, Ad Hominem, Black Altar, Undersave or the Serbian black metal flag beares The Stone to state just a few.

It also features an extensive 4 page feature with well-known logo designer Christophe Szpjadel where he explains in full everything that new bands should have in mind about logo designing, and a retrospective of his long career, highlighting obviously, the Emperor period.

Plus all sort of regular sections and a 78 minutes sampler CD featuring songs from bands that will satiate your headbanging needs.

Sampler CD:
01. THE STONE ‘Mrtvog Negativ’
Decades of experience on the Serbian metal scene has magnified the hate to release a new album where black metal is again dark, menacing, vicious, and remarkably aggressive.

02. CARDIAC ARREST ‘It Takes Form’
With their sixth album, the Chicago based quartet discloses a facet that not only brings the best out of the band but surpasses all their previous death metal attempts.

03. VORACIOUS SCOURGE ‘Fortuity Of The Deceived’
Gathering some of the best musicians of the metal scene and the motivation to create an interesting blend of old school death metal, this immediately aroused the attention of fans of the genre.

04. ABYSMAL GRIEF ‘Ruthless Profaners’
A passage through the world of occult doom metal, based on the very early “rockish” period of the genre where bands focused on creating horror driven melodies full of character and lasting patterns.

05. UNDERSAVE ‘Hereditary Condemnation Through Immunity’
A vile response from the Portuguese scene towards some of the best US death metal bands. On “Sadistic Iterations…” they have evolved and introduced more variation to the compositions.

06. ENDLESS ‘Destroy My Life’
Death metal brutality taken to an extreme, violent, and compelling edge that will satiate the hunger of ruthless metal fans.

07. DRUKNROLL ‘Unbalanced’
Compelled with a type of strength not seen in many established bands, the Russians cross frontiers with their intricate and progressive mix of styles.

10. BLACK ALTAR ‘Tophet’
Main man Shadow surrounded himself with talented and well-known musicians for an emotional farewell to one of Beastcraft’s founding members, Alastor Nefas.

11. EXEKUTION ‘Epic Hangover’
Though nuclear radiation and alcohol might be the sole cause for such effusive thrash metal rhythms, it’s in the playground that they have fun.

12. SURGERY ‘Paradise’
Despite not being a new band nor youngsters any more, they managed to fuse pure energy and intensity with death metal on their 2nd opus from Support Underground!

13. SOLFERNUS ‘Once Upon A Time In The East’
With a twelve year gap in between albums, the Czechs now return fronted by Root’s bass player for a more diversified offering, where in the place of furious blasting tempos has grown emotion, a vital black metal aura, and a dynamism not found previously.

14. MACABRE DECAY ‘Angel Of Decay’
Displaying their Swedish death metal heritage on a debut that mixtures raw tradition with a strong impetus to sound exciting.

15. BATTLESWORD ‘Tongues Of Hatred’
Melodic death metal full of intensity, passion and lively rhythmic intricacies that display a German quintet in their fullness.