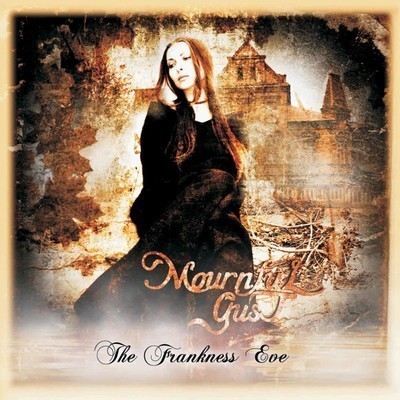 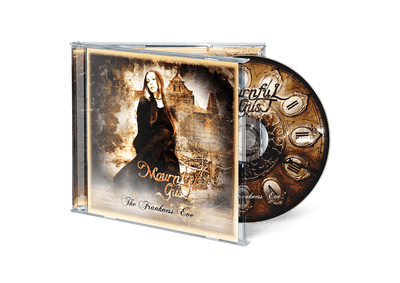 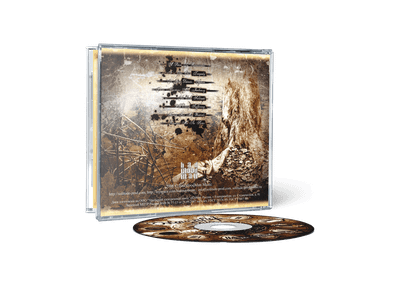 Mournful Gust - a well known Ukrainian group come back with a new album after an eight-year break! The debut album was issued in 2000 on MC and has been rereleased on CD in 2005 by Soyuz/Metal Agen. Today the group comes back with the new material, combining such styles as: gothic metal, death/doom and elements of the European folk-music. The sated melodies are filled with parts of live flute. The voice of the vocalist (known from his work with Autumnia) transfers a rich palette of feelings and experiences, which have been put in pawn in the English-speaking lyrics, passing from clear singing, to growl. The addition of a 24 page booklet makes this disk a unique eye catcher with pit art.

Ever since we reviewed She's My Grief and interviewed Mournful Gust, the four pre-mixed tracks from The Frankness Eve, downloaded from Mournful Gust's website, didn't leave this writer's computer. They were needed. Lonely nights were better knowing that in those rough, yet special moments of isolation the tracks' company could be relied on. Sad, straightforward and brutally honest, they were always there. Especially "The Cold Solitude," which was learned by heart. And now, the album is finally here.

First impression, the one involving the artwork: beautiful. Forget about symbolic, minimalist, modern imagery, this one is elaborated on all levels, with an obsessive attention paid to every single small detail. Each song has a theme, an enigmatic but real image to look at, and the whole thing has an aged and exquisite appearance. Even the non-metal people I've shown it to were impressed by the booklet, and awed by the Mournful Gust logo circling on the bottom, silver side of the disc. Yes, every possible detail.

The impressions about the music had to wait. The Frankness Eve isn't a CD to be evaluated after one spin. Mournful Gust have spent a considerable time writing it (and recording it from January to September 2007). The ideas were probably clear from the start, but, during the creative process, everything that could have been improved, embellished, or added, was taken into consideration and applied. Most of the time, in this collection of delicate sorrowful waltzes, there's even too much going on. The guitars are seductive, the keyboards solemn, the flute gentle and memorable, and it seems that every drum beat was meticulously calculated. The Frankness Eve needs time to sink in, but it is worth it. And, to make the appreciation learning process easier, its passion commands attention.

The details might be delicate, yes, but we're talking about an Ukrainian band here. Everything is laid plain before you, forceful, and although slow, almost aggressive. Mournful Gust are loud, deliberate and above all, strong. Not strong as in "macho" but, if you really feel something, why wrap it in blankets and try to make it distant? Just say it, like this band does. Strong, as in "strong, direct emotions." And Vlad Shahin's vocals really hammer the point home. His clean vocals could shame any quiet, casual singer, and his roars are massive.

Although trying to play romantic doom metal the old school way (like on their debut) Mournful Gust got so carried away that they have, again, inadvertently made a progressive album. Granted, some transitions and moments are a little rough around the edges, and the lyrics could have been in slightly better English. But for anyone with some feelings left in them there'll always come a time when things go so wrong that Mournful Gust are the only right thing. You just have to hear Shahin growling "I press to heart... I feel nothing" with full passion, and you'll know what those moments are about. Here's to more lonesome nights.

While many of Solitude Productions' artists are amongst the intermediately good artists in the Russian scene, there are a great many other artists in the country that are absolutely out of this work as far as musicianship is concerned as well as atmosphere. Just to name a few, Autumn Rain Melancholy, Crystal Abyss, Tvangeste (now Canada), Ocean of Sorrow, Forest Stream, and Autumn amongst countless others, but sitting along the side of all these incredible artists is Mournful Gust, a project that, until now, stayed relatively under the radar. The band initially released "She's my Grief" for a debut on Metal Force in 2000, but it went somewhat unnoticed in the Western world, even when Metalagan re-released it in 2005. It took the band 6 years to regain their strength and release a four-track EP in 2006 called "The Frankness Eve". This one obviously turned some heads, especially with Solitude Productions / BadMoodMan Music, whom re-released it in April '08 with 4 other new tracks.

This time it seems the band is making noise, and deservedly so! Mournful Gust is probably the best thing to come out of gothic/melodic/folk-laden doom metal since their counterparts in Autumn hit the scene in 1993. "And we are Falling Leaves..." was an incredible classic, especially for a band that put up the finances to self-release an album of that caliber. Needless to say, even in the absence of members from that project, Mournful Gust has followed suit and has added more folk qualities to the music. Incredibly melodic and harmonious, The Frankness Eve follows a path of timeless tracks. At any given time, you can find yourself between the worlds of Arkona, My Dying Bride, amd even Type O Negative in sparing moments. The vocal performance is amongst the most excellent to be heard in recent memory from doom projects, a surprise as vocalist Vlad Shahin is originally from underground black metal project Vae Solis, though he does have his later experience (2004 - present) in Death Doom project Autumnia with former Mournful Gust member, Alex Glavnly, a band that has already had success via Griffin Music, and now with Solitude Productions. The clean vocals strongly resemble that of the cleaner moments of Seraphim Shock. Very strong, and at times even operatic.

Everything on The Frankness Eve is incredibly tightly put together. The music, though harsh and definitely not for the lighter side of metal fans, even with traditional elements and all, has a folk, nearly fantasy quality that can't be denied. The music that is heard fits easily with the faery-like imagery of the Prikosnovenie label, but is obviously nothing like the music they represent. Altough, the atmosphere the band represents could possibly be compared to that of Daemonia Nymph and even Dark Sanctuary. The sounds aren't alike, but you get the same imagery involved. Tragic, depressive, cold, rainy, the usual scenarios very much apply with Mournful Gust, however the senses are so much more rich with this music. The sound is, as said, timeless, and as such it will infiltrate your mind and tap into those memories. The smell of wet dead leaves on the ground in mid-Autumn, the forest dirt, wind blowing through the trees in summer. There are so many emotions here from so many sections of life that its hardly fathomable to describe. Very few albums are as colorful as The Frankness Eve, ironic in a sense as the actual artwork of the album is fairly monochromatic sticking to gold / tan tones and black.

If there's one album that you buy in the first half of '09 from this genre, this should be it. Old school fans will even draw direct comparisons to the likes of Italy's old timers Crown of Autumn. Classic, mystical, and heartfelt. Excellent.
Solitude Productions 16.11.2009, 00:36
Review
Metal-Zone
8/10