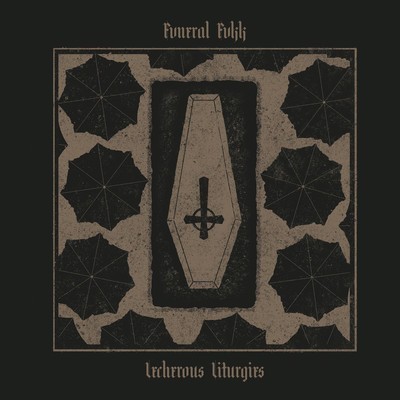 Yes, we know exactly what you think. “Fuck, yet another Doom Metal band”. You are right. So what? FVNERAL FVKK bring the depravity back to a genre which is currently starving. Corrupting members of the german cult acts FÄULNIS and OPHIS as well as the aspiring newcomers CRIMSON SWAN, this new, rotten entity emerged from the pits of sodomy in Hamburg/Germany. Formed in early 2015, its sole purpose is to bring sacral, angelic atmosphere back to Epic Doom Metal… and then rape it all over. FVNERAL FVKK combine the pastoral beauty and solemnity of a cathedral (musically) with the infidelity and vileness of a cemetary prostitute (semantically), with lyrics that deal exclusively with the debauchery of the clergy and / or necrophilia in the name of god. His Holiness is a foul pervert, and this band serves as vessel of His demented will! So, join the Church of the Holy Fvkk and enjoy the transgressions of this first EP!

Fvneral Fvkk are a band from Germany that plays an epic form of doom metal and this is a review of their 2017 ep “The Lecherous Liturgies” which was released by Solitude Productions.

A very dark and heavy doom metal sound starts off the ep and the riffs also bring in a decent amount of melody and after awhile clean vocals are added onto the recording and the music has a lot of roots in the 80’s while also being very modern at the same time and spoken word parts are also used briefly.

All of the musical instruments on the recording have a very powerful sound to them and when guitar solos and leads are utilized they are done in a very dark yet melodic fashion and clean playing can also be heard briefly and spoken word parts along with some evil laughter are also used for a few seconds while all of the songs tick to a very slow musical direction and a couple of the tracks are long and epic in length.

In my opinion Fvneral Fvkk are a very great sounding epic doom metal band and if you are a fan of this musical genre, you should check out this ep. RECOMMENDED TRACK “Erection In The House Of God”.

Ok, here is my first impression regarding this ep:

“Haha, Fvneral Fvkk, that sounds pretty funny. I guess we’ll get something quite similar to Electric Wizard. You know, with titties and sex and stuff. I mean, the first song is titled ‘Erection In The House Of God’, this is nothing to take very seriously. You know what? I’ll just play it and quickly write a funny review about it. After all, it’s doom and I’m a doom fan so that matches up perfectly. Wait. This is actually pretty good. These are some awesome riffs and those vocals are brilliant. I was expecting some grindcore-like grunts but this is more like Saturnus.”

So yes, this ep is a surprisingly good one and I almost feel guilty for thinking these Germans were yet another weak Electric Wizard clone. In three tracks, each of them a highly convincing piece of traditional and melodic doom, these guys have certainly convinced me. The opener remains my favorite but ‘Fvkking At Fvnerals’ is also definitely worth mentioning as a strong doom metal song. It also sounds like a risky hobby. Anyway., this is a damn good ep. It’s doom, good old fashioned doom and it you’re an old fashioned doom fan, you should doom the shit out of this doom. Doomit!

Thematically doom metal usually deals with feelings of misery , solitude and desolateness.
As you might have guessed, this German outfit is primarily focused on somewhat more venereal topics. They’re not newcomers to th scene though, but have earned their stripes in the solid death doom of Ophis and the filthy black of Fäulnis. Now considering their subject matter you might think they would try and outdo acts like Funeralium or Bethlehem in sonic extremity, but nothing could be further from the truth. ‘The Lecherous Liturgies’ is a collection of straight from the heart, undiluted, traditional epic doom metal in the vein of Candlemass or Trouble and a good collection at that. Their tongue in cheek lyrics go hand in hand with lovingly crafted classic riffing and wailing vocals. If you were to describe it through one image, this small EP is the musical equivalent of that notoriously naughty cover on the old Witchfinder General album and in all honesty, they already had me sold from the start with their ludicrously funny Mayhem parody band moniker.

‘Erection in the House of God’ kicks off the EP in incredible style. In typical doom fashion, the track is slow and chugging, but it does lack the progression of other doom bands – it starts as it means to go on. There’s also an awesome guitar solo towards the end from Decanus Obscaenus. Indeed, to finish off their sound, themes and look, Fvneral Fvkk’s band members have adorned themselves with crude sounding Latin names that are like sinister Carry On character names. You have Vicarius Vespillo on the bass, Frater Flagellum on the drums, the aforementioned Decanus Obscaenus and Cantor Cinaedicus provides the haunting, sacrilegious vocals.

You could take offence to the lyrics if religiously inclined, and it’s clear that they come from a place of distrust in the church after such atrocious and unholy acts like what has taken place between preachers and children. This is a topic that has made it’s way into other bands’ writing, too. Disarmonia Mundi, for example, tackled it in ‘Same Old Nails for a New Messiah’. Lyrical themes of necrophilia, rape and debauchery from inside the holy walls of a church might understandably be taken as ludicrously offensive by more than a few. You can delete this paragraph if you want. Don’t know if it’s the kind of thing you’re after.

Cantor Cinaedicus’ lyrics are delivered in a deep tone, with a drone to them that wouldn’t sound out of place in a church. He’s delivering a sermon all right, but one of rape, necrophilia and debauchery. A look at the lyrics, however, and you’d might just find their somewhat dark humour funny, unless easily offended. What follows are the entire lyrics of ‘Underneath the Phelonion’:

You can see why people could be offended by lyrics such as these, but it does appear that they were written with tongue firmly in cheek. Despite this, however, the music is about as serious as you can get – this is no joke band. The Lecherous Liturgies gives the goods of excellently written and performed doom. ‘Underneath the Phelonion’ starts quietly, but this time, it does build. At just under six minutes, it’s the shortest track on the EP, but also the finest. It features a cracking riff that builds alongside the vocals, gaining heft as the track develops until eventually resulting in a climax. The sexual undertones here are entirely intentional and fit alongside the lyrics like a glove.

The last track of this EP, ‘Fvkking at Fvnerals’, is more mellow than what immediately precedes it. The central riff is slower, more chugging and the vocals are deeper, with a slight echo to them. The production is magnificent here, the best in an EP that’s exceptionally well-recorded and mixed. There’s more of a darkness and foreboding to ‘Fvkking at Fvnerals’ than there is in the rest of the EP, its slower pace helping no end in this regard. It finishes the record off well with its heavy, chugging riff and foreboding atmosphere. It’s just a shame that there isn’t more on the EP. You’ll be loving it and then it just stops, sixteen minutes later. You’ll be left wanting more, so Fvneral Fvkk better not sit back and release their first full-length record sooner rather than later.

Whilst the lyrical themes and name of the band may put plenty of people off, Fvneral Fvkk’s debut EP showcases an exciting new name in the oversaturated world of doom. The Lecherous Liturgies is dark, foreboding and heavy stuff. You may find the lyrical themes vulgar, but most would probably just find them humorous. The Lecherous Liturgies certainly succeeds in what the band set out to achieve.

GodDAMN. “The Lecherous Liturgies”, the first EP from German doom masters Fvneral Fvkk, may only be two tracks long (three if you count the bonus track), but that’s all the band needs to absolutely crush you under the weight of their monolithic sound. On first listen, you’ll be hammered by a beautiful, dark, melodic flavor of doom metal that is soaked in sorrow and dripping with despair. The clean vocals especially add a dimension of seductive melancholy that can hit you deep. There are definitely plenty of epic, swelling moments here that will light fire in your soul and leave you feeling singed by the grim passion it inspires. Once you’re good and wrecked by the power of the music you can start to delve a bit deeper into the lyrics – and if you hadn’t noticed yet, you’ll now realize that the songs are all grandiose tales of sacrilegious perversion. It’s easy to miss if you didn’t see that the first track was titled “Erection In The House Of God”. The way the band pulls off this depraved motif with such subtlety in the music is amazing in itself – but the fact that the tunes are so great on top of that really makes this release stand out. I really love the few songs that are on here and I can’t wait for the band to put out more!