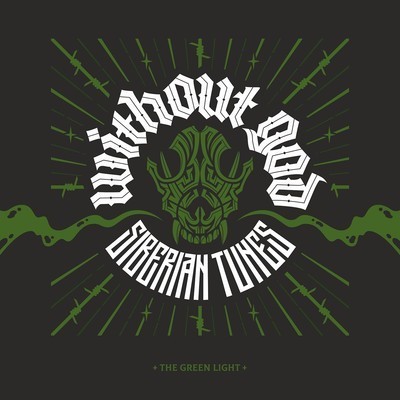 Another masterpiece by Without God crafted through hard work, as if one has plowed up black shriveled earth and sowed it with anger and aggression, fear and anxiety. The album is filled with yearning for magical worlds from where only a few can return. The work comes as "Siberian Tunes: The Green Light" EP featuring lightness, green tones and Russian lyrics for better perception.

Hailed as one of the most interesting live acts in the Moscow metal underground, stoner/doom/sludge metal act WITHOUT GOD released a small 4-track EP titled “Siberian Tunes: The Green Light” on August 13th, 2021 ahead of their similarly titled third full-length album “Siberian Tunes: Purple Clouds” which was released over a month later on September 17th, 2021. While being formed back in 2008 when guitarist and vocalist Anton Brovkim and guitarist Olga Brovkina got together to write a raw blend of traditional doom and sludge, Olga seems absent from the lineup but does get credit for writing on this pair of releases. Drummer Ivan Kucherenko and bassist Victor Butrin soon joined and the quartet made two demo recordings entitled “Grief” and “Believe and Forgive” in 2009. Shortly after an eponymous EP in 2010, they recorded their first full-length “Lambs to the Slaughter” in 2011 which included redone versions of their previous EP’s songs and six new cuts. Their second full-length in 2014 titled “Circus of Freaks” saw them continue their evolution in ultra-low tunings, volumetric effects and vivid, yet memorable compositions. An EP and a split release with several other Russian bands in various genres expanded their reach while they prepared a live album “Live Night with a Crab on a Field” in 2020.

It seems there were some shakeups in the lineup for WITHOUT GOD and I cannot help but wonder if it was side projects that affected it. Main songwriter Brovkim and bassist Butrim were part of SOILEATER starting around 2012 but Butrim seems to have departed before their first eponymous full-length was released in 2018 with Scott Simons being introduced as early as 2014. Simons would then end up taking over bass duties in WITHOUT GOD in 2019 with Olga Brovkina seemingly leaving around the same time. Curiously, she is credited with writing lyrics on both the recent releases and bassist from 2014-2019 Fedor Ivanov is credited with Russian translation, so it seems communication is still open between previous band members. Both the “Siberian Tunes” related EP and full-length were recorded, produced, and mixed by Alexander “Trygun” Sarychev at Vintage Studio & Major Studio in Moscow and mastered by Esben Willems at Berserk Studio in Gothenburg, Sweden.

But enough about band drama, I am relieved to say the music on WITHOUT GOD’s “Siberian Tunes: The Green Light” EP is quite good and embodies the melancholy of psychedelia-tinged stoner doom with yet more polish than their previous EPs with just as much of the heaviness. While opener “Нет Сил” or “No Strength” may sound like typical stoner metal fair – opening with no frills drum fill into firmly fuzzed out, drudgy, slow guitar riffs, it makes up for the simplicity with otherworldly vocals delivered with a ghastly intensity from Anton Brovkim. It also builds, nicely in growing anticipation to a wonderfully, wah-wahed up solo that almost acts as an outro before Brovkim interjects periodically with vocal punches ending with a disgusted grunt. Second track “Праздник” or “Vacation” is a bit faster and explores more guitar theatric territory. Third track and only track to be in English on the EP “The Green Light” seems to be the epic and somewhat more grandiose, giving more power back to the impressive vocals and room to breathe. That is until the somewhat bloated closer “Не Беда” or (No Problem) sends you on one hell of a psychedelic journey on the way out. I have not been following these guys until now and I went back and listened to their entire discography to see how they got to this EP and it was a week of listening well spent. I look forward to more since they could capture my attention with only twenty something minutes on this EP.

I'm in the fortunate position where I receive lots of promotional material. Some are really nice surprises, others tend to be put on the back burner as they just don't suit the kind of music I feature on the Podcast. There are a few however that make the heart skip when you see the name of the band featured in the promo. The email I received featuring a new release from Without God made me break out into a sweat. I've followed these Russian guys for years and eagerly snapped up every album and EP they've produced and never been disappointed by any of them.
So, is 'Siberian Tunes: The Green Light' any different? That's a big no! It's excellent as always. Four tracks of psych tinged stoner doom, slightly more polished than what has gone before but no less heavy. Copious amounts of sludge is still apparent, however the added metallic crunch to the riffs add a potency that manages to tarnish the extra polish which is further scarred by the excellent, slightly acidic lead work that manifests itself throughout this album. One of the aspects of Russian metal I've noticed over the years is the propensity for the vocal delivery to be on the harsh side but this isn't the case with Without God, instead, vocals on 'Siberian Tunes: The Green Light' gel perfectly with the stoner undertones of this E.P.