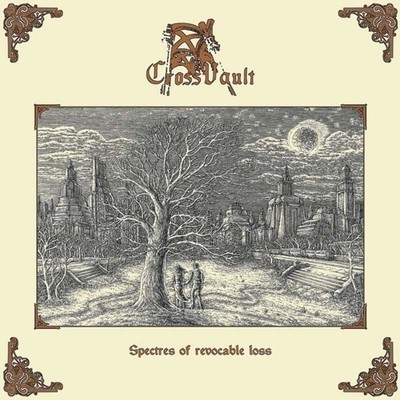 This album is one of these rare achievements any band could be eternally proud of! Although the two guys behind CROSS VAULT are anything but newcomers, "Spectres of revocable loss" is their first release under the banner of CROSS VAULT. If the name WARNING (UK) as a main influence rings any bells, and you're of the opinion that CLASSIC DOOM METAL should first and foremost be slow, harmonious, sorrowful and crushing, yet never tiring, boring, repetitive or lacking in variety; that the most important ingredients are masterful songwriting, flawless musicianship and an unreal (really! we're in awe) vocal performance, then this is THE Doom Metal album you should write on top of your to-buy-list for 2014! The album includes 5 own compositions that focus on the subject of loss, as well as a cover of the WARNING (UK)-track "Footprints" which quite honestly sounds as if it belongs on this album. The artwork was created by well-known American artist Lucas Ruggieri in his beautiful Doré/Dürer-style, and depicts a scene from George Orwell's dystopian classic "1984" which also inspired the lyrics to the song "At our bleakest". Vinyl is limited to 200 copies - Clear