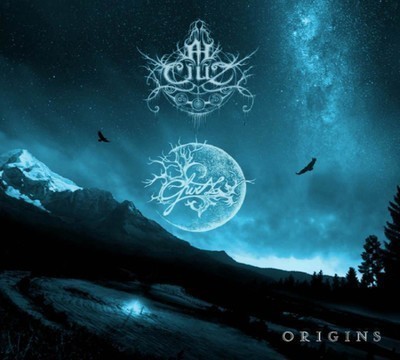 Hypnotic Dirge and Throats Production presents the release an intense nature-themed atmospheric Black Metal split record entitled "Origins" between two great atmospheric bands - Ah Ciliz and Chiral. Ah Ciliz is an atmospheric Black Metal band founded by Elmer (Klär, Painful Depression) in 2008. The history of the project now includes four full-length albums, and a split with Griefthorn all released between 2011-2014. Three years later, Ah Ciliz returns with three excellent new songs for the "Origins" split focused on indigenous cultures, nature, and the cosmos. The songs from Ah Ciliz span between powerful, triumphant, beautiful, and spiritial throughout its duration which is aided by varied and interesting riffs, soaring leads, and an atmosphere that matches the lyrical themes perfectly. Chiral is an Italian one-man band from the countryside near Piacenza, set up at the end of 2013. His compositions shine of a dim light dwelling through the branches, alternating solar as well as gloomy moments. Folkish instruments are used to guide the listener through contemplation, while gentle veils of synths are crafting a misty and mysterious aura. If the dreamy and hypnotic atmosphere of Lustre met with the breathless wonder of Falls of Rauros' melodies, and the wild raw guitar lines of Wolves in the Throne Room, that would be probably be what Chiral sounds like. For fans of: Lustre, Agalloch, Mavradoxa, Windbruch, Falls of Rauros, Wolves in the Throne Room