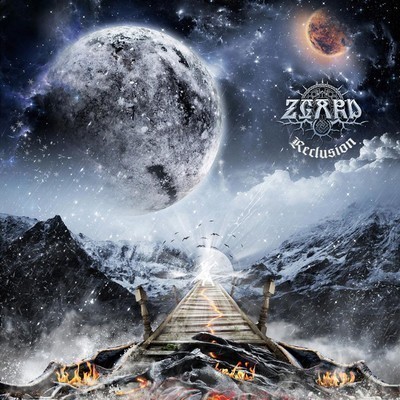 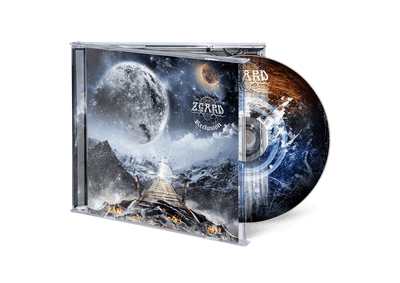 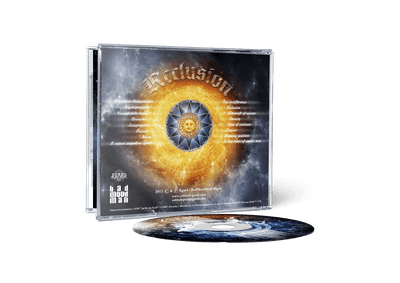 This is the second work of Yaromysl, a guitarist of Ukrainian folk pagan metal band Goverla, with his own Zgard. In this project the musician expresses his individuality by his ideas in atmospheric black metal style (the first work was made in folk pagan metal style) . The themes of compositions remain the same: paganism and hailing the power of nature; music-wise the album features majestic melodies based on atmospheric keyboards, powerful guitars and deep screaming with inclusions of folk fragments.…and let all the fans of pagan metal and atmospheric black metal open their hearts for music of Zgard!

Think about the trip this one took, it’s kind of like the album art. Coming from the cold wastes of the Ukraine, all the way to little old us. Think how people communicated a hundred years ago, what will they do a hundred from now? And why in the hell are we wasting your time with such reflections? It’s because in spite of all this knowledge and its ease of access, some people can’t do anything right. Take this right here, Zgard’s Reclusion, which one reviewer out there, from a site we shall not name, called “Russian black metal.” Really? Even when the dude himself says he’s Ukrainian pagan metal? Is it that hard to do a little search? Are we that lazy because it’s so easy now? Now, after this travesty, the whole site we mentioned is under suspicions of journalistic fraud… To set the record straight, Zgard is from the Ukraine, he sings in Ukrainian, and this is pagan metal. It’s a little unusual, too, because Solitude Productions and its sister label BadMoodMan Music (same link) is largely known for doom, plain and simple. We did a thorough look at a number of their releases about two years ago, some of which were quite good. So it’s strange to see something so removed from that style, but it doesn’t matter, because Zgard is so zgood that we had to do that, yeah, we had to, sorry. Even though this is a bit older, it’s kind of the perfect segway into the new year, what with all the snow and such.

Can’t get any more pagan than the opening of Reclusion, which sweeps in with a wintery soundscape filled with archaic keyboards. This is one of the hallmarks of Zgard’s sound, it’s almost garish, but there’s something strangely lovable about it all. Think Burzum, but not asinine, and that’s basically exactly what it sounds like. Zgard has a strange ability to use what to the ear is inferior equipment to its maximum potential. The keyboards are very noticeable, they sit right up front and refuse to be sequestered to the back, ever. It’s a bit disquieting at first, but about midway through the second track something oddly charming about Reclusion sinks in, and it won’t leave. No matter the effort you put into forcing yourself to see it as deficient, he finds some way of creating complexity out of it. Absolute mystery how this guy pulled this kind of sound off, mixing spacy, fantastical electronics with pagan chording. It’s possible no one will ever figure out how, either, because if they did they’d have to sound exactly like Zgard, or like Burum behind bars, which no one wants to remember.

So, okay, keyboards, weird, trippy, for some reason enjoyable, what about the rest? Well, delightedly, Reclusion has that classic pagan sound. The chords are expansive and epic, the bass generally clean, there are flutes, samples of walking through snow, even a damn balalaika in there, so the general effect of ‘pagan’ via folk instrumentation and structure is all there. And, bonus, Zgard knows how to write. We’ve had some flame wars with some folk metal bands in the past that we’re kind of proud of, and the usual reason is a detachment from actual tradition and a lack of realistic substance. Zgard overcomes that simply because the Ukraine actually has a pagan tradition he’s drawing from. At times it’s like what Blood on Ice kinda shoulda sounded like, no offense to Bathory. Great album, but other than defining the idea of pagan via so-called ‘Viking metal’, it’s kind of heavy on the cheese. Reclusion, great sound. There are only two complaints easily remedied in the future but which caused us to drop the score a little: the production. Generally, it’s clear, but at times the intense layering of sounds, especially with the keyboards, can make some of the melodies hard to discern, and there are a few places where songs simply cut in and out with no introduction or proper resolution. A very simple thing to correct, but the one item that really keeps it from being stellar. That’s likely a personal complaint coming from years of music production, because regardless Reclusion is an example of pagan metal done right, for a change. Check out the track “Eternity” in particular.

Ukrainian Zgard delivers his second full-length album, a strong and monumental ambient black metal work, with some pagan influences. Although pagan black metal is overabundant in Russia, Ukraine, Poland, Baltic states and similar, and often bland and on the fringe of being laughable, people still seem to delve further into this genre, with little to no innovations. The two ruling sides to this album are quickly presented, great melodic riffs and rich keyboards are responsible for creating a cold and enchanting atmosphere, while followed by violent drums of mid and fast tempo. Although the album has moderate pagan influences, the atmospheric black metal side is in the foreground, relying on keyboards to complete the atmosphere. Zgard offers a decent atmospheric black metal album, with memorable moments, and minimal pagan influences, so get it if you get a chance.
Solitude Productions 30.05.2013, 01:44
Review
Mroczna Strefa
4/10

Hm… Next band from my country. Completely killer work… Really mystic and dark Pagan black metal, made in really great way, with purely winter atmosphere and deep feelings… Even several songs sung on our native language (what is great!). All of you should know Ukrainian main bands, which built our scene, one of main is NOKTURNAL MORTUM, and here are tons of bands who used Pagan theme with music and in music, and the fact this culture is very “near to us”, many bands make really great stuff and able put correct feelings into the music. As for ZGARD – this band has used winter nature, and as a result we got pretty great stuff. For me this is far not average album, but this is something bigger, I like it from very start and up to the last song. Such deep and really native… As for me – this is powerful album, with just brilliant production and excellent ideas, as well as filled with really deep feelings and emotions, I can see musicians did hard job… For those who like freezing, emotional Pagan black metal (not some pseudo-Pagan but real Pagan Winter Black Metal)…
Solitude Productions 07.04.2013, 21:56
Review
Metal Soundscapes
8.5/10
05.07.2012

Zgard is a new one-man-band from Ukraine formed just in 2010. Its only member is Yaromysl, who is also in the pagan folk metal band Goverla. Zgard released 2 full-length albums in 2012, both in January. The first album entitled “Spirit of Carpathian Sunset – Дух Карпатських Сутінків” is released by the German label Darker Than Black Records and the band plays pagan folk black metal, with the help of another Goverla member in the flutes, Gutsul. Two weeks later the Russian label BadMoodMan released the second album “Reclusion“.

This albums contains 8 songs and lasts for 56 minutes. Their music is melodic atmospheric black metal with many keyboards and a few touches of folk pagan metal here and there. Their melodies are based on the almost symphonic keys and Yaromysl seems to have endless inspiration full of different ideas. His vocals are black metal screams, but not very extreme; sometimes they have this screaming whispering style… Either way they fit perfectly with his music. The songs are mainly in mid tempo and all of them are quite long, with various changes inside them. Acoustic guitars help the band build a sad mood in the atmosphere, while the few parts with flutes are simply enchanting; especially in the fifth track “Хладокрес / Rise of Coldness“, my personal favorite of this album. Just Wonderful! The album is professionally produced and Zgard have a very clear and balanced sound. All lyrics are in their native language, while their thematology is about paganism and respect to the powers of nature and cosmos!

2012 begins very impressive for Zgard. I haven’t listened to their first album, except for a few samples, but I am sure I will love it even more, since it seems much closer to my personal taste. I can tell for sure though that their second work “Reclusion” is excellent and deserves your attention, especially if you are into atmospheric melodic metal. The amazing artwork of Kogaion Art in the 12-page booklet makes it even more appealing! In the following links you can get a taste of both of their albums. By they way a new 3rd album is already recorded and its release is scheduled for the end of the year!

This Pagan/Black Metal band Zgard from Ukraine was established in 2010. Two of its members are part of another band Говерла which has already released one Pagan Metal album. It’s great that in “Reclusion”, unlike in Говерла’s disc, Black Metal tendencies dominate and pagan details just enliven the music and bring new colours. Actually because the trend of standard Folk transferring to Metal has not caught on with Ukrainian bands, the usual form of Ukrainian Pagan Metal comes with a stronger or weaker trace of Black Metal. And since the majority of Ukrainians have a pagan spirit, the standard music genre is Pagan Black Metal.
I can compare “Reclusion” only with other Ukrainian bands of this genre, because I haven’t listened to the other album of Zgard. Sadly the band isn’t able to distinguish itself with something interesting or deep. What immediately catches my ear is the extensive use of synthesizers. Maybe for some other band it would be an advantage, but in this case because of the primitive sound of guitars, synthesizers come in the foreground and the music begins to sound unpleasantly artificial. Moreover synthesizers are programmed as if to create a cosmic atmosphere and that links the sound to cheap, tasteless Ambient music with Neo-Classical details. Another disappointment is copying. The most memorable parts that become like a spine of the whole composition seem to be borrowed from Drudkh or Nokturnal Mortum. Until you notice this you can enjoy “Reclusion”. But when you hear those similarities you begin to accuse Zgard of plagiarism. Of course that might not be true, but it sure sounds like it.
Let’s finish with the criticism already, because there are things worth complimenting. For example Zgard manage quite well to balance between typical Atmospheric Black Metal and harsher Pagan/Black Metal. They retain a deep, memorable atmosphere and don’t forget the structure of a song either. The repetition of rhythm or guitar riffs is absent so the sound is constantly changing, moving somewhere. Let me conclude this review in an allegory - I could not say that Zgard is a precious pearl cast ashore by the Metal sea. It’s more of a large common bream.

A great album starting from the fourth track. The first part is sometimes boring and the mix of the songs is not perfect. Recommended to all who like Post and Atmospeheric music with Black Metal taste.