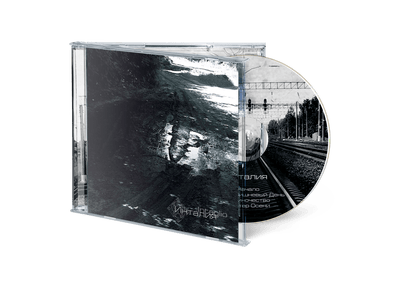 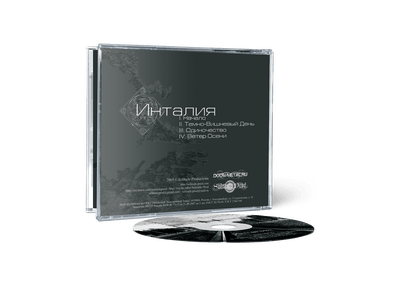 Conceptual album "Intaglio", is a fruit of imagination of musicians from bands "S.C.A.L.P". and "Yachur", it is filled with a unique, depressive atmosphere of cold and gloom, developing the best funeral doom in its genre (Evoken, Mournful Congregation), following the traditions. CD contains the eight-page booklet with photos and texts. "Intaglio" - is the first Russian funeral band which has been officially issued!

I'm a big fan of Funeral doom, but I wouldn't really describe it as my favorite style of metal (that award goes jointly to black and death metal). With that said, I don't think I've ever come across a poor funeral doom band. Is there such a thing as poor funeral doom? If there is, I've yet to discover it. Sure, there's plenty of poorly executed Funeral doom out there (or 'Saddam' doom as I now like to call it - geddit? Hohoho); but nothing that I would necessarily call awful. Anyway, I'm digressing before I've even started. Intaglio are a Funeral Doom band from Russia, and this is their self-titled debut album. Apparently when it was released in 2005, they were allegedly the first Russian Funeral doom band to have an official full length album released (according to Solitude Productions' web site that is), and for what it's worth, it's not too bad at all.

The opening track is entirely instrumental, but sets the tone nicely for the album. Coming strictly from the achingly slow and melancholic school of doom (where stars can seemingly form and die in the time between each chord struck), Intaglio have set the basis of their music on thick slab-like chords decorated with clean delay drenched guitars for atmosphere, sparse drums and gurgling low growls. I don't think it'd be a stab in the dark to say Intaglio are primarily influenced by Thergothon, Skepticism and the like, as they feature a fair amount of those originators styles, albeit merged into a bastardized, less unique version. No, Intaglio are not exactly original, but again, they're certainly not poor. The band are simply suffering from the fact that they're playing music which has been done before, and done around 5-10 years ago.

It's not that they've done a bad job of it either, it's just that while the Skepticisms of this world have moved on and further pushed the boundaries of doom, Intaglio, whilst being perfectly competent, are still seemingly on page one. Also, the band suffer slightly on the 'keep your interest' stakes in some of the lengthier songs (apart from the 3 minute opener, the remainder of tracks range between 13-18 minutes in length). If you're going to have tracks that long, you've got to make them capture your imagination for the full duration, which unfortunately they don't quite manage to do throughout the entire album. Overall, I'd say they've certainly got talent (especially on the diverse track 'Solitude'), and they certainly could progress in the quality over quantity stakes bearing in mind this is their debut effort. So, one to look out for in the future? If they can fix the minor irritations, I don't see why not.

This is the self-titled debut album from the Russian funeral doomsters Intaglio. They play a correctly executed funeral doom, with everything you can expect from a band of this genre: long and really slow tempo songs, with an atmosphere of coldness and deep sadness. The album consist of 3 songs, plus an excellent and full of sorrow intro (with a guitar solo from the additional musician Pavel Peristy), with beautiful clean guitar melodies. The album has a very good sound production, and a great design that fits perfectly with the atmosphere of the music, really nice black &amp; white photography. The compositions are at a very good level (all at the same level, I can’t choose a favourite track), good vocals (growls deep enough) good clean guitar parts mixed with the simple heavy riffing, with no keyboards at all, and the “exotic” fact that all the songs are sung in Russian. A very good debut album from this two men band (Evgeny Seamen: music, guitars, bass and programming; Maksim Mazin: texts and vocals), but don’t expect surprises here, just funeral doom in it’s purest form. If you are a funeral doom fan (as myself) you’ll enjoy this album, despite the fact is not something remarkable, but very well done. (A.R.)
Solitude Productions 23.09.2009, 03:12
Review
Metalstorm
8.5/10
20.12.2005

It's good to have the luck to do the review of some Funeral Doom bands sometime, especially when it is a good release. But this time, this combo doesn't come from the United Kingdom or Scandinavia but from Russia. Maksim Mazin and Evgeny Semenov two really talented musicians chose to release their first album "Intaglio" this year and believe me that with their four three songs (plus an intro) and a length of 47 minutes, all the ones who want some good Doom will be more than happy.

No need to say something else first, "Intaglio" is cold as ice and really depressive. Actually the album follows the classic road of the Funeral Doom release with a really slow tempo, a really dark ambiance and evidently some really sad but beautiful melodies. There are only three songs (the first without any vocals actually sounds like an intro) on this release but they're evidently long but not boring at all. Evidently it's not easy to listen to this kind of music, especially if you're not a diehard fan of the style but the songs are not boring and not so hard of access at the end. Our guys understood how to do something "catchy" (and you know like me that it's not a really appropriated term for an album of Funeral Doom…).

But let's talk about the music. I actually like the melodies, they're maybe simple but always really touching. Same with the general ambiance, it's maybe not something disturbed and black a la Pantheist but I'm sure that you'll have some weird feelings when you'll listen to it because believe me, it's classy.

For a first album and then a first try, I have to admit that Intaglio knew how to score the goal. The production is really good, the artwork and the layout of the booklet fits perfectly with the spirit of the music of the band. My only regret come from the lyrics that are in Russian. Don't understand that I only want English in Metal, at the opposite, but unfortunately even if it sounds really good, I cannot understand them and you all will agree with me if I say that the lyrics are really important for an album of Funeral Doom. So let's hope that we could find a translation somewhere one day…

No, no, boys and girls. Ultra doom, funeral doom or whatever the hell it´s called, it´s not an exclusive from Finland. “Uh, oh, ah... hmmm... is it possible? Is there any maniac outside Suomi releasing zuperzlow metal? Is there anybody out there desecrating and defying the (un)holy presence of Skepticism, Unholy and Shape Of Despair?” Yes, sad but true, hahaha. That trinity (among other non-Finnish acts, I was just kidding in those lines...) has spawned many disciples here and there, and “there” is Russia in the case we´re dealing right now. Intaglio are another token of the influence which that despised style, ultra doom metal, emanates. Bands that have come into my mind as I was listening this bunch of songs are Tyranny (“Bleak Vistae”) and My Shameful. However... no comparisons are possible. Yes, it´s funeral music, but thick reverbs, layers of guitars, psychedelic effects and similar things don´t exist here, as simple as I say. Quite dry music, really. So forget about mammoth sounds like Esoteric´s juxtaposing harmonies or Shape Of Despair´s dreamy landscapes: these songs are built off a very limited number of notes and the arrangements are very dry and simple, through icy patterns and portraying a minimalistic instrumentation, based on massive and severe repetitions. Desolation is the main feeling I perceive when “Intaglio” sounds on my stereo, but there are other bands that express that sentiment much better than these guys. Funeral doom is a style where the apparently scarce instrumentation must be combined with witty and creative songwriting and arrangements. Intaglio haven´t grasped that thing, in my opinion, and every now and then manage to play something similar to the concept 99% people consider as funeral doom: loose random guitar chords played at snail pace, conforming songs lasting more than 10 minutes. Let´s see if the next release is more inspired.

Intaglio is the first funeral doom metal band from Russia that released an album. Solitude Productions is the label that gave us the chance to listen to this release and they deserve congratulations for the great work they do and the great bands they sign. Doom (funeral, doom/death or whatever) is an underground style and it is always great when you meet a great new band.

This Russian duet follows the path of Evoken and Mournful Congregation. Funeral doom with aq very good production and some excellent ideas. The tempo is real slow so if you think that bands like My Dying Bride and Saturnus are slow then this is not your stuff. "Intaglio" consists of 4 long-time tracks with some acoustic guitars to fill the songs and some excelent funeral doom riffs like the one in the 6th minute of the second track. The vocals are excellent for the style and they are so brutal that you cannot understand that all lyrics are in Russian

Fans of funeral doom must listen to this album. It's one of the best albums in this style and i think that their label should try to promote them as much as they can in order to get some more recognition. An excellent album for dark souls...