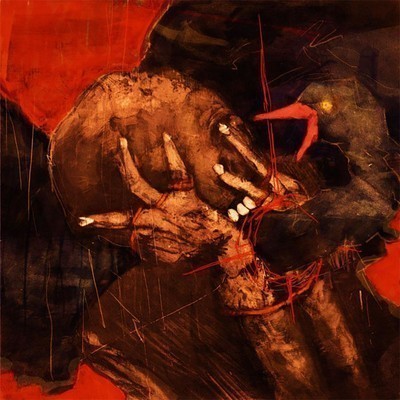 The second strike of ALBEZ DUZ. Occult Doom the Ancient way. Truly an as-yet-undiscovered gem, the duo of ALBEZ DUZ create dynamic, emotive, expertly textured monoliths of sound that pull from various threads of doom metal, psychedelic rock, dark ambient, and even neofolk. Now, with The Coming of Mictlan, ALBEZ DUZ has both made bolder strides sonically and seemingly perfected their idiosyncratic, oft-elegiac craft. Dark and most doomed for sure, there's a softer side to The Coming of Mictlan that easily evades the now well-worn cliches of doom metal and occult rock. These gentlemen are neither into perfection nor being a philanthropic Samaritan. ALBEZ DUZ is about blood, occultism, the drive for Gnosis, the savoring of nostalgia and melancholy. The aim is not to indoctrinate but to offer a balance to society – a spiritual sanctuary. The band considers itself as a unity that consequently abstains from any names and rather focuses on their artistic performance than on image and personality cult. In the past, the band had stated that ALBEZ DUZ is not about being innovative at any cost but about bridging towards the past, a path back to instinctiveness and the picking up of a nostalgic atmosphere. Here, with The Coming of Mictlan, they've accomplished that AND the art of innovation. Vinyl version was released on Iron Bonehead Productions.