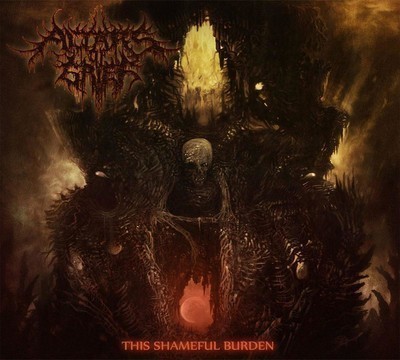 Following the acclaimed Of Ash and Dying Light split album of 2015, Canadian Prairies doom metal juggernaut Altars of Grief is back with Iris, a second full length album of devastating proportions. This new blackened doom offering introduces new levels of dynamics and textures, and while it is the more accomplished work from the Saskatchewan band to date, it also carries the darkness and light personality that Altars of Grief developed since 2013. On Iris, melancholy and storytelling reaches new depths of beauty and sorrow. Containing equal appeal and oppression in its aesthetic, this new album will raise the bar for Canadian Doom-Death. Altars of Grief's singer Damian Smith comments: "The story of Iris is very much rooted in our prairie surroundings and deals with the struggles of addiction, sickness and religion. A father finds himself unable to connect with and care for his young daughter, Iris, who has fallen seriously ill. Spiralling deeper and deeper into his vices, and feeling rejected by Iris’ new found and unwavering faith, he gets into his car and decides to leave her behind. Somewhere along the icy road, he loses control of his vehicle and perishes. His purgatory is to watch helplessly as Iris slowly succumbs to her illness without him." Iris will feature the art of Travis Smith [Seempieces] (Katatonia, Opeth, Anathema). The cover artwork brilliantly depicts Iris’ final moments as she kneels before the winter beset church and embraces her fate. For fans of Woods of Ypres, Adora Vivos, October Tide, and Swallow the Sun. Those who stare at the dying light will fall into Iris.