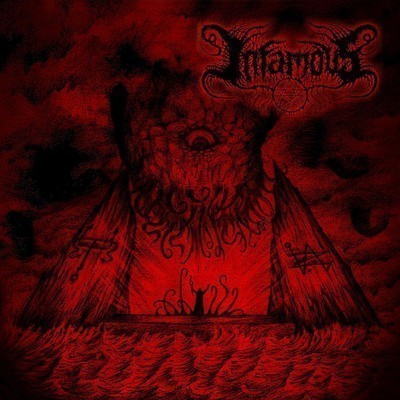 The debut full-length of Chile's INFAMOVS, "Under the Seals of Death". Hailing from the city of Coquimbo, the band was formed in late 2014 by drummer A.M (ex-Predator), guitar players S.D and C.H, and F.U on vocal duties. This line-up recorded the "Emanation of Impure Heresies" EP that was released through LMDT Records in October 2015. Later on, C.H left the band and was replaced by R.B (Swarm of Terror). With the addition of F.G (Swarm of Terror) on bass, the band recently recorded their debut full-length album, titled "Under the Seals of Death". Drawing their lyrical and conceptual inspiration from the occult, ancient deities and indigenous culture and history, Infamovs pay homage to the deeds and knowledge of yesteryear through a brand of Death Metal that's heinous, ruthless, sullen and primitive, influenced by acts such as Incantation, Dominus Xul, Dead Congregation, Imprecation, Immolation, Sadistic Intent, early Deicide and early Morbid Angel. However, it is the band's thirsty 'n' miserable execution which sets "Under the Seals of Death" as a breed apart. Every gnarled, gangrenous riff and rhythm burls forward with an irrational sense of possession, as if the players' very lives are depending on it. Through this foul, gooey haze, a slimy-yet-sinuous songwriting emerges, marrying ably contorted linearity to tangibly, disgustingly physical forward momentum. It sounds and smells and feels like DEATH, rotting deeper in a pool of its own forlorn fluid. From this, Infamovs emerge: South American madness has a new name.

Треклист:
1 Into The Death
2 Dawn Of The Black Dance
3 Call Upon Blasphemovs
4 Impure Plaguiarisms
5 God Of Pestilence
6 Of Force And Plague
7 Interlude
8 Serpent Of Sin
9 Chaos-Madness