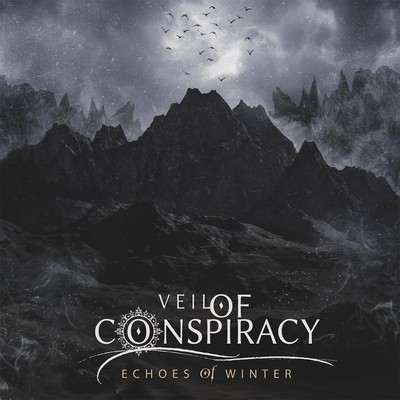 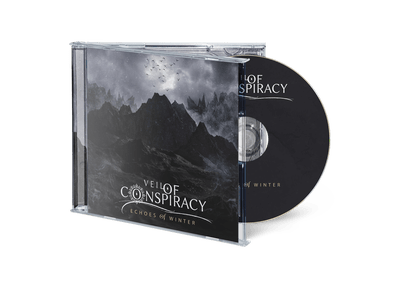 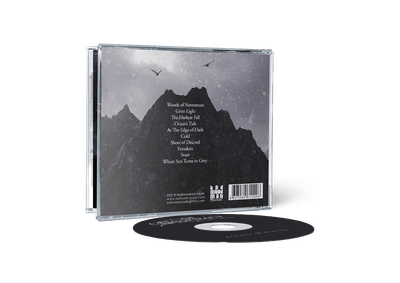 The new album by the Italian band featuring musicians previously participated in other bands and already released their first full-length album. "Echoes Of Winter", unlike the debut album, demonstrates balance, refinement of the material and musicians’ skills, together with its integrity. Perfect recording quality underlines all shades of the music and the mood of the album. The atmosphere of despair and emptiness is emphasized not only by harmonious musicians' performance with sublime riffs and deep guitar solos, but also by pure melancholic vocals with tragic screaming inclusions. This journey into coldness and darkness will be especially pleasant for fans of the classic Katatonia, as well as Opeth and The Morningside.

Veil of Conspiracy are a melodic metal band from Italy and this is their second album.

The promo blurb states that the 45 minutes of material on Echoes of Winter is for fans of Katatonia, Opeth, and The Morningside, which is a good starting point for Veil of Conspiracy’s sound. I’d also add that fans of bands such as Amorphis, Paradise Lost, Deathwhite, Moonspell, My Dying Bride, and Anathema will find much to like here.

The songs are well-written, offering fans of genre tags such as melancholic metal, old-school doom metal, melodic metal, Gothic metal, and dark metal a feast of enjoyable music. Out of the bands mentioned above Katatonia are probably one of the prime influences, although a range of bands can be heard in Veil of Conspiracy’s professional and engaging sound.

The well-recorded music slips through the airwaves with studied ease. The band know their source influences well, and these songs embrace their musical heritage while still offering a compelling slice of emotive melodic metal in its own right. The music is quite accomplished, with textured melody, rich feeling, and nuanced performances frequently on display.

I like the vocalist’s voice very much, whether he’s singing cleanly or screaming with vigorous passion. Some of the harmonies deployed with the clean singing are particularly affecting, and his voice works well with the rest of the music. The harsh vocals are striking in their juxtaposition with the cleans, their blackened bite adding an extra dimension to the songs when they appear.

I enjoyed this record a great deal. It may wear its influences on its sleeve, but its enthusiasm, passion, and ability for this style of music is undeniable.

The Italian band Veil of Conspiracy brings us their second album “Echoes of Winter” via Bad MoodMan Music going on sale on August 27th. The band is known as Melancholic Metal, a genre characterized by heavy melodies, an oppressive and languid atmosphere, reminiscent of bands like Katatonia and Opeth, with touches of progressive metal.

This second album is characterized by the use of clean guitars in the picks, the use of a melodic voice alternating with screams and that oppressive atmosphere at all times. They also delight us with changes of rhythm that make us be alert and where the drums take the lead, as in the song “Echoes Of Winter”.

We have details like in the song “Forsaken” where guttural voices appear together with the shouted voice. One of the songs that I like the most is “Ocean’s Tide” where the song takes on one more gear, alternating with slower moments and heavy guitars. Another song that catches my attention is “Svart” where shouting and guttural voices alternate, with an omnipresent drums that set the rhythm and a good guitar solo.

In the song “Where Sun Turns To Gray” the melancholy of the theme reflected in Emanuela’s voice contrasts with the guttural voice that really sounds like Doom. On the contrary, we have certain songs that pass without pain or glory with the feeling that it is more of the same, as in the case of “Shore Of Discord” where the guitar picking is the best or “The Darkness Fall” in which the guitar save the subject.

We are definitely facing an album with a lot of technique in all its instruments and in which the feeling of oppression accompanies you throughout the album, on the contrary sometimes you feel like a little Dejavu on the album since there are songs that are very similar to you. Correct disc that improves the quality of its predecessor but does not finally get you hooked. Only recommended for fans of the Doom genre. All the best.

The song is about a person who desperately tries to take refuge in the woods, but it begins to refuse the human being that’s trying to break its natural balance. So the title came from this refusal.

A dark winter suddenly comes and embraces human faults, hides the light and makes man falls into a whirlwind of coldness and despair.

Man arrives at a point in his life where he looks back to the past and realizes that the only thing left to do is wait for the autumn of his existence, which turns into a cold autumn full of grimness.

A man contemplates the stormy sea sitting upon a cliff while thinking about all the failures of his past life. He hopes that the tide can redeem him from his mistakes and give him a peaceful death.

This song is about arriving at the edge of the precipice and falling into the deepest point of desperation, where only death can be a relief.

The deep sadness of mankind is reflected in nature, bringing coldness, despair and darkness.

The main protagonist of the entire song is nature, with its power and its multiple manifestations, which make mankind feel a nothingness in comparison.

Abandoned by the light, man gropes in the dark, wandering aimlessly and feeling completely forsaken by life.

The song focuses on the darkest and most malevolent representation of nature, in the presence of which man can not help but succumb.

In this song, nature tries to console man, consumed by sorrow and suffering for the loss of someone loved.

The Italian band VEIL OF CONSPIRACY – known for a particular genre called Melancholic Metal – has released their second full-length album titled “Echoes of Winter” via Bad Moon Music just this past Friday August 27th. The band was formed in 2016 and has gone through many different musical phases to reach a more mature and defined sound by the time they were ready to release their first full-length “Me, Us, and Them” in 2019, which propelled them to the top of the list of important bands of the progressive metal genre. The “Melancholic Metal” genre they play in is characterized by heavy melodies, oppressive and languid atmosphere, reminiscent of bands like KATATONIA, OPETH, NEVERMORE and SOEN. They represent a unique musical entity within the Italian metal scene, merging the Nordic power of distorted guitars with a special attention to the melody, elegance, and progression while taking great care to craft meaningful and poignant lyrics to go along with such crafted music.

Now, just two years after releasing their debut, VEIL OF CONSPIRACY have used this time off from live shows wisely to come back after a year of being couped up inside to release their second album “Echoes of Winter”, an amalgam of doom, death and black metal with just the right tinge of progressive tendencies to push these genres a little further. Their second album, however, is more characterized by the use of alternating screams and melodic clean vocals and a more present appearance of clean guitars in the mix. The band all got together in their own studio to record their parts and handed off the parts to Stefano Morabito and his 16th Cellar based in Rome to be mixed and mastered. The band has also left Revalve Records and the record is instead being released by Bad Moon Music in partnership with Solitude Productions. The album is a love letter to nature – walking in it, being surrounded in it, etc. – and with the band being particularly appreciative of winter, decided to dedicate their record to it.

While throughout “Echoes of Winter”, VEIL OF CONSPIRACY morphs through many moods and styles, opening track “Woods of Nevermore” prepares the listener with quite the apropos introduction to an extreme metal album with an epic scream. It doesn’t stop there and features some black metal screams among a wash of heavy droning guitars before featuring some almost tender, soft, clean vocals juxtaposing the harsh ones and a truly speed metal worthy guitar solo. Then “Grim Light” is very OPETH featuring the softer, brooding vocals but instead of death metal growls, it’s black metal screams and some creepy, clean guitar arpeggios. Overall it’s more doom metal than any other style though, with a bleakness that usually only achieved with a Nordic metal band. It’s very much an atmospheric album, despite all the genre infusions and really illustrates the coming of winter in a bleak, “wall of sound” kind of way. I found myself getting lost as if buried in snow, but thankfully I won’t get frostbite from the “blanket of snow” kind of sound from this group. They’re not really pushing too many boundaries, but do seem to continue a trend of atmospheric, black metal infused doom metal, a mixture of OPETH, SOEN and Sunn O))) with enough black metal qualities without terrible production.