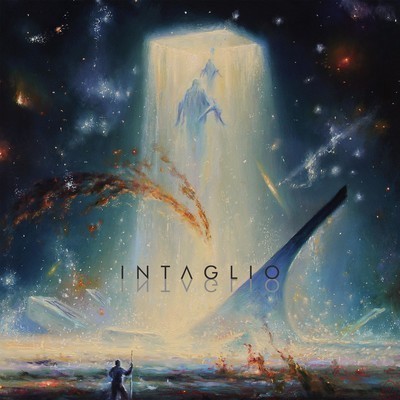 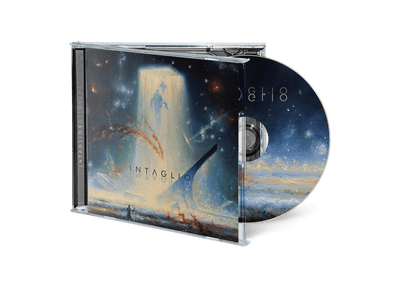 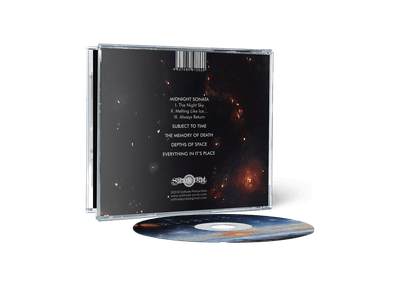 I reviewed the demo single version of 'The Memory Of Death' back at the very end of 2019, when this album was originally scheduled to see probable release in 2020. A touch of worldwide disruption promptly ensued, so instead we got a remix of the self-titled debut album in 2020, and a second single in the shape of 'Subject To Time' earlier this year. In a way, I'm quite pleased about the slippage - I haven't been in much of a mood for Doom while the pandemic was really raging here, and since I was looking forward to hearing how 'II' would turn out, it's nice to be listening to it in a much more genre-receptive frame of mind. Especially, as it turns out, since Intaglio have made it a bit of a challenge.

From its beginnings as the solo Funeral Doom project of Solitude founder Evgeny Semenov, back in 2004, the band has moved into territory the press release describes as a "Doom opera", and which flirts extensively with a neoclassical Death/Doom sound. All instruments are "real", with a lengthy list of featured musicians contributing - amongst others - strings, flute, and a wide variety of different vocal ranges. The album itself is conceptual, designed to be listened to in its entirety as it explores the cycle of life and death against a cosmic backdrop. Not the most trivial of ideas, nor the most trivial of presentations: there's a lot to be taken in as the journey unfolds.

It all starts off intriguingly, effectively melding flute, cello (again, as per the singles, sounding almost like a viola), some relaxed guitar and the cavernously rumbling harsh vocals of Who Dies In Siberian Slush's Evander Sinque to begin the triptych of 'Midnight Sonata'. That quickly becomes more of a statement of intent, feeding in a number of contrasting male and female vocals, and more familiar Death/Doom motifs creeping into the guitars, particularly, and at times, the percussion. That never changes the semi- orchestral nature of the compositions, and the core of cello and double bass remain throughout, carrying stately themes as the album proceeds at a slow and steady tempo. The mix is an even-handed one, giving equal weight to all instruments: none of them are allowed to overwhelm, just to have their solo moments where appropriate. All of which help achieve the sense of continuity, where the songs are more movements within a symphony than discrete individual works. That may not be to everyone's taste, given that it doesn't provide clear boundaries and maintains a certain similarity of feel throughout, but when the intention is to provide a single immersive sonic voyage, it makes perfect sense.

Obviously, rock with classical instrumentation has been done on many an occasion, sometimes gimmicky, sometimes not. This is not: there is complete integration between all of the different compositional lines, though separation in terms of the ways they ebb and flow. In its most Death/Doom moments, you might be reminded a little of My Dying Bride, or The Fall Of Every Season, but these are linked by segments that vary from pure strings, through to gentler shared soundscapes that bring to mind classic Prog Rock/Metal melodies. It would be quite possible to name-drop a lot of bands where there are momentary resemblances, but that would be pointless - taken as a whole, 'II' offers some half-familiar refrains without ever sounding significantly like anything else. For me, the most significant trait of the album is the comparatively light atmosphere it creates - despite the harshest vocals and the sometime heavy guitars, the feeling here is not one of of oppressive heaviness, but a more subtle blend of melancholy, fatalism, and acceptance: a recognition and a regret that everything passes, in time, rather than a raging against that simple fact. There's dignity in that, and a certain amount of softness, even celebration of it, frequently carried by the more classically-oriented strings, as well as the clean guitars.

If I was to pick any fault with it, that would only be in the vocal palette, which sometimes comes across as being a little over-elaborate. The quality of the singing isn't in doubt, it's just that for me not all of the timbres and phrasings sit easily with my ears, nor do some of the switches between them. But that's just personal opinion: objectively, it's possible to understand why those contrasts are used, and others may well fully enjoy the additional variety that creates. In any case, it was never enough to prevent me listening to the album end-to-end, but sufficient to highlight that the vocal drama of opera, even Doom opera, isn't always simple to appreciate.

So, in conclusion, 'II' is an interesting release, and one which genuinely establishes some new and different ground. It's possible, with hindsight, to see traces of that already existed in the debut album, but not to predict how much more complicated and more technically advanced this sophomore would be. As to whether the underlying concept will appeal, it's hard to say, simply because there's not much it can be measured against. I found the sense of drifting, misty sadness to be an absorbing one, eminently suitable for times when a gentler soundtrack is desired - in that respect you could perhaps say it sits in similar territory to bands like Clouds, where it's something you might reach for in the right mood, rather than being a regular feature on your stereo. I'd certainly recommend it on those grounds, and on its willingness to try something different, but would caveat that those things also make it much more of a matter of personal taste than many Doom albums out there.

The second album by Russia’s Intaglio, unassumingly entitled II, follows their debut by more than 15 years. It is filled with moments that set off fireworks inside a listener’s head.

That’s probably not something you expect to read about a band whose music is classified by Metal Archives as “Funeral Doom”. Most music so classified is more likely to mesmerize than it is to provoke gasps of wonder. But II isn’t typical, and while it is indeed entrancing, the magnificent spell it casts derives from unusual ingredients and an unusual conception (and Funeral Doom is no longer an adequate description).

In its conception, II was intended to be experienced as a single long piece. It has a 7-part track list (though there are no pauses between the tracks) and consists of movements, but it is accurately described as a single “doom opera” which achieves its full impact only when heard from beginning to end.

For its ingredients, Intaglio assembled a large cast of performers and live instruments. Seven professional singers contributed voices that range from basso profundo to soprano. The instruments included not only a panoply of electric and acoustic guitars and percussive sources but also classical instruments such as upright bass, cello, chimes, and flute, as well as mouth harp.

The opera begins with the three-part “Midnight Sonata“, which occupies the album’s first 13 minutes. The opening part, “The Night Sky”, begins creating the spell with heavy, grim reverberating chords coupled with whistling flute and cello strings. It slows and becomes more crushing and desolate under the impact of Evander Sinque‘s cavernous growls and Roman V‘s methodical, bone-smashing drum-blows. The first fireworks come when some of those trained voices make their first appearance and reach a crescendo as the cello soulfully wails.

The music flows seamlessly into “Melting Like Ice”, the second part of “Midnight Sonata”. Backed by a softened drum beat, a duet between the upright bass and the cello leads the music into a phase of remembrance and warmth, which provides fireworks of a different kind, because the music is so sublime. Mountainous chords and more heavy-handed drums increase the music’s intensity, and ghostly gasps make it more haunting, but a crystalline guitar melody seizes attention with its sparkling tones and beautiful feeling of wonder and wistfulness.

When that melody briefly vanishes, the music begins taking a much darker turn, leading into the final part, “Always Return”. That melody surfaces again, but craggy chords, abyssal gutturals, and a mournful cello arpeggio bring the music into the gloom of desolation — only to have tenor vocals soar in a way that lifts up the heart.

“Midnight Sonata”, in all its phases, is completely enthralling, and so is the rest of the album. Intaglio continue to create ebbs and flows of intensity and changes in mood, using the classical instruments and varying voices to great effect. Along with the cavern-deep vocals and the heavy metal instrumentation, they lead the music into phases of harrowing hopelessness, wretchedness, and regret, but also periods of yearning, fond remembrance, awe, and even delight.

It should be noted that the classical instruments and voices aren’t used as occasional accents, but are a continuing and vital part of the experience, fully integrated in everything that happens. It should also be noted that drumming always seems perfectly attuned to these changes, and becomes more than a mere rhythmic backdrop.

The path of the album is carefully plotted, sometimes ornate and elaborate, and at other times relatively stripped-down and simply crushing or jolting. It’s produced in a way that provides clarity and separation, enabling the listener to identify all the contrasting and complementary pieces of this rich musical tapestry as it’s being woven, even if the full picture doesn’t fall into place except gradually.