Cart is empty
Cart is empty
View cart
Checkout
Home/Label Releases/Solitude Productions/HellLight - …And Then, The Light Of Consciousness Became Hell… (CD)
Save 25% 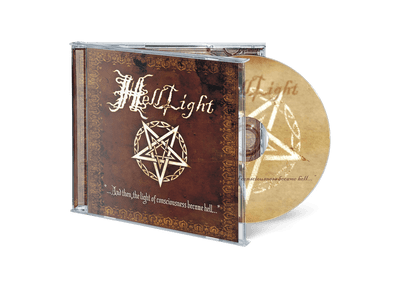 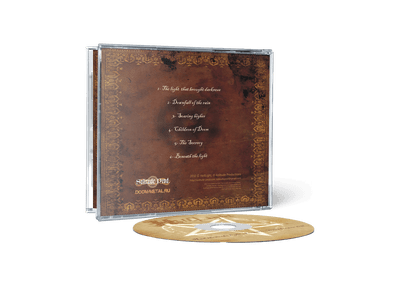 The third album of a Brazilian band demonstrates the further progress of the musicians. Six epic tracks featured on the album are filled with deep tragic passion created by solid guitar sound and rich keyboards. Dense sound and interesting melodies distinguish the album among their other works. Piano interludes, mid-tempo fragments and clean vocals make the new album of HellLight an outstanding example of funeral doom death metal.

The latest album of the Brazilian project HellLight, an LP release “...And then, the Light of Consciousness Became Hell...” is a slightly atypical example of Funeral Doom Metal. I am one of those who need grim music from such a genre. In this case the music we have is not so grim, but sad, depressive and soaked with a Gothic sound. This way the emotional spectrum of the whole album varies wildly and changes from track to track. Some are epic, optimistic; others are longing, melancholic, nostalgic... The album does not have something special in a musical sense. Maybe more than usual we hear keyboard solos. Also they create the background melody, which is unfortunately rather bland. Generally the music is quite primitive, though it leaves quite a good impression. First the violin on the album is given over to the vocals and guitars, which, despite being somewhat drowned in keyboard melodies, are much more important than other instruments. All album tracks are long, over ten minutes, so the disk seems to go on a bit long. Despite mediocre creativity and primitiveness of the CD, the release leaves medium-good impression, but does not impress enough to enjoy it often.

Who knew the warm and sunny land of Brazil could create such cold and dark music? Based off their frigid sound, one would think Hell Light came from the heart of Siberia or some other region where winter lasts nine months. However, once you get past the regional peculiarity of sub-equatorial funeral doom, Hell Light doesn’t have much novel to offer. Hell Light play a classic brand of funeral doom in the vein of Evoken and Shape of Despair. There is a lot of back and forth between epic clean vocals and deep guttural growls, which gives the music energy over long stretches of desolate doom. At times, the clean vocals are pushed too far. Singer Fabio de Paula often oversteps his vocal range by trying to sing too high, making for some less than pleasurable passages. Musically …and then, the Light of Consciousness Became Hell… is solid, if unspectacular. There are lots of memorable melodies, most of which have a dark, Celtic flair. However, the execution is fairly pedestrian. The guitars lack any individuality and the percussion is as plain as Russian cuisine. The underwhelming guitar solos feel obligatory. Also, the album is way too long, dragging on for 78 minutes. All in all, a fairly run of the mill funeral doom recording.
Solitude Productions 31.10.2012, 23:28
Review
The Executioner Zine
7/10
14.03.2012

Brazilian Funeral Doom bands tend to suffer from the same flaw as their Ukrainian and Russian counterparts : they fall on the generic side of the border. Listening to an average-sounding band while reading a good book can be a pleasant experience, it's not the same thing when you have to review it and decide upon the pros and cons of the record.

HellLight come from the same city as Sepultura, and celebrate this year more than a decade of existence. In case you're deaf enough to not recognize what they're playing upon the first spin of the cd, they' ve released an album called 'Funeral Doom'. Their concept seems a bit weird to me (a mixed bag celebrating paganism, satanism, reason and science over religion...go figure how the first two points can go along with the third one), but not the weirdest I've seen in Doom-related music (after all, we have Aarni). The music is classic Funeral Doom the way the Brazilian bands seem to like it : with symphonic keyboards in full force (right now, I can only think of Through The Valley as the sole band from Brazil that would dwell in the rawest side of Funeral Doom, most of the other ones prefering to rely strongly on keyboards). Something that goes along the same path as Tyranny, Rememberance, Pantheist or Until Death Overtakes Me, albeit clearly with more style than substance. The guys in HellLight are all really good musicians, that you can't deny. Everything is well done, from the alternance of great epic vocals and abyssal grunts, to the great progressive guitar solos that reminds me of Monolithe. And alas, when Monolithe managed to vary rhythms and melodies over the course of their hour long tracks, HellLight just keep re-using the same basic formula from song to song.

This is where the boring-o-meter goes higher. For the record is long, way too long: 80 minutes long for only 6 songs, to be more precise. And all the songs follow strictly the same formula and, worse, the same melodies. This goes as far as being only able to distinguish one song from another by some small detail ('oh, he sings only in clean vocals on this one, haven't paid any attention before') and only if you've not fallen asleep by then. To makes things even more generic, some songs sound even just like if there were twice the same song played back to back : for example, just when the middle of opener 'The Light That Brought Darkness' is passed, the structure comes immediately back to the begining and the band goes on playing it anew right from the start...In a song that is 12 minutes long, why not having simply done it in just 6 minutes? And somesongs are longer than this one...

'...And Then, The Light Of Consciousness Became Hell...' could have been a good record if at least 2 or 3 songs had been left aside. Or if the songs had been shortened and given more attention to their structure. Here, it is hard sometimes to focus on the music before half-track. I do think that the members genuinely believe in their concept, and I won't blame them for that (to each his own, I say) : it's just that, when you hear the result, you don't hear someone putting his heart and soul into his beliefs, you just hear someone playing music like he hadn’t found anything better to do that day. Too bad, because considering the experience of the musicians and how well they play their instruments, they could easily deliver something really awesome. They should work harder crafting their own sound, and not base everything around their concept. HellLight clearly have the potential to do better than this and to craft something more than ultra-generic Funeral Doom. I truly hope they’ll break the generic mold next time.

Orthodox funeral doom with the added advancements of soaring-to-the-heavens / spiraling-into-the-abyss leads and pious clean vox that do the same…oooh, it feels so good to be alive, so dead. You can smell the sulfur, too!
Solitude Productions 27.09.2011, 04:08
Review
Hardsounds
7.8/10
08.02.2011