Cart is empty
Cart is empty
View cart
Checkout
Home/Label Releases/Solitude Productions/HellLight - No God Above, No Devil Below (CD) 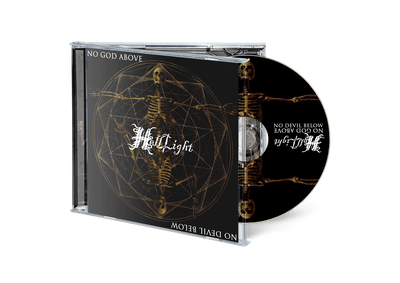 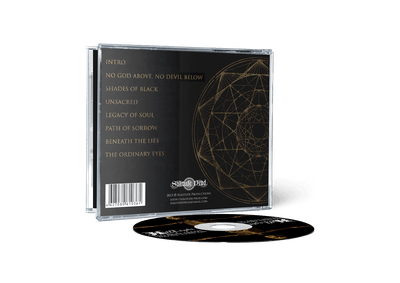 The fourth full-length album from HellLight, one of the most interesting and distinctive bands from Brazil. During years of studio and concert work the musicians created their own sound and style evolving from classical funeral doom metal through doom death metal to traditional doom metal. «No God Above, No Devil Below» presents combination of two latter styles making itself attractive not only old band fans who will discover new sides of HellLight, but also for fans of doom in the vein of Tristitia and late Funeral (Norway). The music of HellLight is still epic and filled with tragic feelings, manifested mournful clean vocals, atmospheric keyboards and piercing guitar solos.

Tracklist:
1 Intro
2 No God Above, No Devil Below
3 Shades Of Black
4 Unsacred
5 Legacy Of Soul
6 Path Of Sorrow
7 Beneath The Lies
8 The Ordinary Eyes

Though “No God Above, no Devil Below” is already the fourth album from this Brazilian band, I don’t think they’re moving forward. Comparing it with this three-year-old EP “The Light that Brought Darkness”, the new music is better and more pleasant, however, taking into account their previous long-plays, the new work is quite banal. I admit that certain tracks and melodies are pleasant to hear, but as a whole it sounds uninteresting and boring. What the disc lacks is simple drive.
Another important aspect - also not in the band’s favour - is the length of the album. Eight tracks, spanning over 75 minutes, which is way too lomg for slow and melancholic Doom music. It loses the concentration of the listener and becomes boring. Especially during the whole rhythmical part and bland solos make the listener yawn out of boredom. The keyboard parts, which would have contributed to the atmosphere in a different genre, sound sleepy and empty. The vocals often seem to miss the note, though sometimes they remind me of the pleasant voices of Draconian. The album is somewhat worth attention, but objectively speaking - this is probably the weakest album from Hellight.

With a band that has such a dominating and profound presence as HellLight does it can be a bit of a daunting task to attempt to capture that in mere words. There’s just something unique to their intricate combinations of heaviness, melody, bludgeoning riff assaults, and cascading moods of pure majesty and drudging sorrow that has continually knocked me on my ass time and time again from pure awe. A typical HellLight song is a lengthy averaging about 8-10 minutes in length and a turbulent emotional ride through atmospheres that are extremely heavy to the extent of creating a dense whirlpool through the stormy black waters of emotion that basically rip apart my mind and train of thought at that very moment, and although labeled as funeral doom/doom death they are without doubt more epic doom metal, especially with their substantially philosophical and deeply emotionally moving lyrics (Solitude Aeturnus, for example), often times challenging religious/spiritual thought and general human nature.

The band also enjoys adding a slight cinematic tinge of symphonic metal (as in violins, piano, but nothing proggy or over the top) in the background and on more than one occasion using that as a break between the heavy parts for a creation of their distinct gripping climaxes, which serve to balance the bludgeoning death metal influences in some of the chords, but for me one of their trademarks aside from the guitar tone that is very much Hellight and present in their albums from beginning to current is in the vocals. Hellight have this uncanny ability to perfectly time rough death growl vocals and Fabio’s incredibly harrowing clean vocals in a way that in some songs plays out like a dialogue between two personalities and even though the incredible vocals, speaking in terms of both sound and delivery, are a definite strong trait specific to Helllight I cannot deny the power of the guitar sound in the leads and melodic parts,as it’s a definite “calling card” or MO of Helllight and is such a major ocmponent to their sound. I’ve been anxiously awaiting a follow-up to the obliterating …And then, the Light of Consciousness Became Hell , my first experience with Helllight that has launched a bit of an addiction to them that for intensive purposes somewhat rivals Solitude Aeturnus, The Wheel, and Lord Vicar for times when I need something heavy and loaded with killer riffs and emotive thought inducing lyrics that are somehow therapeutic and now here it finally is, No God Above, No Devil Below , and it is the heavy crushing titan of doom metal greatness that will surely hold me over for awhile and was well worth the wait. And yet again they deliver with eight lengthy, melodic songs loaded with subtle symphonic breaks between moments of explosive doom/death riffs while simultaneously probing the mind with questions of existence, human nature, religion, innocence and depravity through lyrics delivered as ghostly whispers that become sudden bursts of emotional epic vocals, sometimes ridden with agony, other times a glorious fury that can be almost paralyzing from the intensity.

At this point I probably should warn you that Helllight also have a tendency to invade your head a bit after listening. That, in retrospect, is probably the single factor that makes them so great in my opinion even though by now many of you are thinking that I’m blowing this out of my ass in purple smoke rings because, to paraphrase some of you, ‘they couldn’t be that great if I’ve never heard of them’ but I can guarantee that if they had me gasping and sweating a bit than there’s a good chance they will stop some of you dead in you tracks as well. I mean it seriously when I say that it’s been a long time since a band had such a presence that I literally could not turn my attention away from it. So please do listen to their works at the links below and if you are struck in the “deer in the headlights” pose then absolutely DO get a copy of No God Above, No Devil Below, and …And then, the Light of Consciousness Became Hell.

Top songs for myself are: “No God Above, No Devil Below,” “Shades of Black”, and “Legacy of Soul”. “Legacy of Soul” hits me hard lyrically on is on par with Solitude Aeturnus’ “Destiny Falls To Ruin” and “The 9th Day Awakening”,as those are songs that make me shiver and instantly change my mood to meditational and introspective. I really can’t over emphasize or exaggerate the intensity of Helllight, as it’s simply harrowing at times. If you’re a pretty big Solitude Aeturnus fan,and/or epic and true doom metal (The Wheel is another essential band in my mind) in general than you really need to experience Helllight.

Brazilian doom-monger duo's forth album marks the band's devolution / regression toward simpler songwriting, exploiting a formula that has been used better in the past, when comparing _No God Above, No Devil Below_ to the band's previous full-length album, namely the mighty _...and Then, the Light of Consciousness Became Hell..._ from 2010. It all boils down to the simple fact the songwriting, the ideas and their execution were all superior on the band's 2010 album.
HellLight play a unique brand of funeral doom and epic doom hybrid, where slow, mournful yet ultra melodic funereal melodies coupled with deathly, yet typical grunts intertwine with epic (often slightly cheesy, if not totally goofy) moments, embodied especially in the vocalist's clear and soaring voice (whenever he's in his 'epic mode' exclusively) and an endless array of guitar solos and distinctive epic doom metal riffs.

These very different sonic dichotomies -- the crawling, melodious velvet abyss flirting intimately with the ridiculously epic, soaring cheesiness -- working together, interlacing and coiling around each other, is what makes this band unique: no other band out there uses that technique, as far as I know; at least not as impressively as HellLight does.

But alas! HellLight became a bit sloppy, or lazy, or both; for _No God Above, No Devil Below_ is less an inspired work of art and more of an echo (often pale in comparison) of the band's 2010 aforementioned grand opus. It's like their intensity faltered several notches, their ideas diminished and their overall enthusiasm, or 'zest', for their very music has become just a shadow of _...and Then, the Light of Consciousness Became Hell..._; an unripe, slightly amateurish effort that runs in circles around a single idea being repeated over and over for more than an hour.

That being said, removing all comparative factors, _No God Above, No Devil Below_ is still a very enjoyable recording; it's one of those ubber melodic, ultra beautiful recordings you cannot but love, meant for easy listening for their ear-friendliness and their hyper accessibility, but mostly due to their singular and still very impressive epic-versus-funereal admixture that will leave no one indifferent. Either you'll burst into tears of laughter listening to this, or let yourself be immersed within a sea of bliss and make this album your magical comfort zone for an hour or so. I chose the latter. Probably so should you.