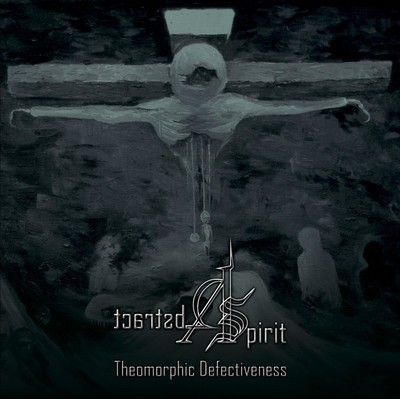 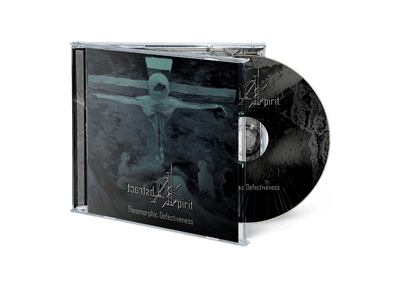 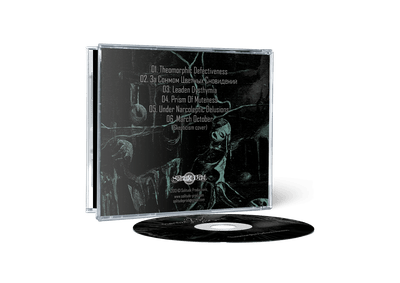 The fourth album of one of the best Russian funeral doom metal bands Abstract Spirit «Theomorphic Defectiveness» continues to present composer talent and performance skills of musicians. The music which can be recognized from the very first chords is still gloomy majestic and insane, memorable for its unique demented atmosphere. Indeed, this is a funeral orchestra performing the soundtrack to apocalypse. At the same time the musicians add new fresh ideas to their music, such as extensive choirs, which differs «Theomorphic Defectiveness» from previous works, however, continues the search for perfect expressive sound. The insanity goes on!

Russian funeral doom ensemble Abstract Spirit are a unique beast in the often barren landscape of the rising Russian / former Soviet Union doom metal movement, but not only there. It is safe to say, based on the band's previous efforts, that it is one of the very few true voices of today's funeral doom; a band that has given a new meaning to darkness, whose music is synonym with suffocating atmosphere, and whose ingenuity and endless rivers of creation between the very narrow walls of this particular style's aesthetics are nothing short of stupefying.
Seeing the band's evolution through the years, a fan of theirs knows they are always good to deliver, offering with each release a more complex recording, denser and more majestic an atmosphere than what had been captured before -- and with it, they always try something new and ultimately also stunningly successful; from keyboards to brass instruments, from straightforward, 'conservative' funeral doom, to a Cathedral-sized dark symphony with more than just a tuba or a flute, or a trombone.

_Theomorphic Defectiveness_ sees Abstract Spirit in their most complex phase; a natural evolution from their monumental _Horror Vacui_, an improved, more versatile a beast that has verged on being almost completely drenched in neoclassical / neo-operatic approach, so unique and so effective the likes of which I have never heard before -- and I've heard a -lot- of funeral doom albums in the past decade.

The belching vocals are still here (the most ominous of all 'metal vocals'); the absolutely mesmerizing keyboards are still here; but this time the whole is more varied: the drumming, the vocal tones, the multitude of brass instruments. Yet now Abstract Spirit have decided to go all the way and totally screw with our minds in that they add these minuscule ghostly sounds, like sonic apparitions here and there, embedded in the recording in the most ethereal of ways, like something that should not be there, fleeting and bizarre; an extra punch to the music, as if they needed it in the first place, so this whole magnum opus is not only as good as funeral doom gets (pitch dark, abysmal, tragic, enigmatic, surreal, melancholic to the most extreme, religious, transcendental, greater than life, Gothic and devouring), but it is also a total and absolute mind-fuck, if there ever was one.

I promise you won't get enough of this album; it's perfect in any sense of the word, setting new standards for this sombre musical art of funeral doom. It will show you sights that are otherworldly yet unbelievably beautiful without diminishing from their insanely dark essence and lurking madness.

_Theomorphic Defectiveness_ is easily one of the best albums of year 2013; a funeral doom milestone so enormous, I dare Abstract Spirit to outdo themselves on their next album -- I dare them!

There is that scene typical of horror literature: the main character falls in a deep pit and finds himself lost in darkness, surrounded by creatures as strange as they are menacing; yet with their true frightfulness partially obscured by the lack of light. The hero of the story then often sinks into madness after long depictions in which the author resorts to expressions such as "misshapen creatures", "obscene ululations" or "infernal silhouettes". Lovecraft, for example, was especially good at this exercise, with stories like The Horror at Red Hook, Imprisoned with the Pharaohs or The Rats in the Wall. Well, without absolutely adopting this concept, Abstract Spirit, on their new album, offer us something which could be one of the most accurate musical transcriptions of this kind of scene.

'Horror Vacui' was a slow procession of ghosts going down the river Styx. You were left with many unanswered questions about these spectral apparitions, but you could approximately understand their nature, making this album a trip that was filled with both the fear and the fascination of the afterlife. On 'Theomorphic Defectiveness', you not only have no clue at all about what It is that crawls around you, but you can also feel how abominable, dangerous and hateful It is; and a good part of the fascination fades away, replaced with abhorrence.

So, musically speaking, what are the ingredients of this change of atmosphere? The most important change you notice are the keyboard effects: 'Horror Vacui' and the albums before that mainly used orchestral, sounds akin to classic instruments - and without a doubt the musical ensemble who performed it were still human (although probably dead for centuries). On this new release, however, lots of sounds are far more "abstract" (no pun intended): they can't really be linked to a concrete instrument, they can't be clearly identified. Rasping, clinking: this concert of eerie noises induces a sense of horror, the fear of encountering something which can't be defined. And although this new approach isn't as strong on each track of the album (the first and the fifth songs utilise it most noticeably), and that the usual funeral orchestra (combining strings, choirs, piano and the emblematic ominous brass instruments) is still present, it's enough to give a new identity to the atmosphere of the whole album.

That said, terror isn't the only feeling that the record manages to convey, it also has a more depressive side. If you're already familiar with Abstract Spirit you'll know what to expect, in particular the sad (although oddly ironic and grotesque) brass horn melodies and the lethargic and massive choirs. More innovative are the apathetic keyboard notes on 'Leaden Dysthymia', showing the Russians able to add new elements to aspects of their music which were already quite mastered on their previous record. The mix of new and idiosyncratic features in their music, besides being really enjoyable, creates a more varied album.
'Horror Vacui' wasn't repetitive, far from it, but it was very homogeneous, and there were few variations between the different tracks (which of course isn't a flaw in Doom when it's well done, and it was). On this new album, the songs, although alike, are more easily differentiated, and it's as much due to the aforementioned keyboard work as to the guitar- and vocal work, both of which offer us a more 'eventful' performance than usual.

Indeed, AK iEzor adds to his dark majestic growls, at times, with some hateful screams which enhance the stressful and misanthropic side of 'Theomorphic Defectiveness'. The same applies to the guitar play: without leaving the border of the Doom realms or becoming actually aggressive (at least in a Metal way), the riffing sometimes displays a morbid vehemence which stands out from the slow stream of chords on 'Horror Vacui', and sometimes reminds of the more guitar-driven identity of 'Tragedy & Weeds'.

This fourth opus is therefore a success. If, in terms of proficiency, the gap between 'Theomorphic Defectiveness' and 'Horror Vacui' isn't as big as it was between the latter and 'Tragedy & Weeds', it remains a clever new chapter to add to the band's discography, maintaining its own identity and bringing new elements to the table at the same time. In my opinion, a confirmation that Abstract Spirit is one of the most interesting extreme Doom bands of these last years.

The third stab from this apocalyptic Russian band, "Theomorphic Defectiveness" is an hour long jurney through torments and laments, despair and loss of any hope. It's amazing what these 4 Russians managed to deliver on the new album, I guarantee you'll feel the weight of the World on your sholders after a simple audition; yes, it that heavy! The vocals are actually cryptic, inhuman, low growls used like an instrument of torture here, most of the guitar riffs are slow and repetitive but also not boring, alternating with killer mid-tempo to fast Death Metal riffs, and the drums are even slower but oh so heavy. The keyboards build the whole mystic atmosphere around Abstract Spirit's music, and the guitar leads are making this atmosphere even heavier. One of the most tormenting and inspired Funeral Doom Metal albums I've heard in a while; beware, gat it only if you're used to this type of music, otherwise stay away, it will ruin your spirit for a whole week!