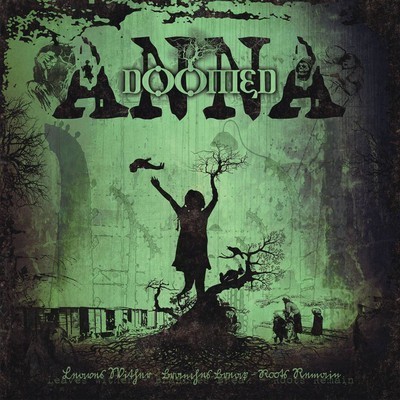 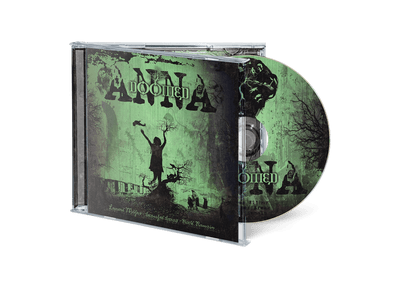 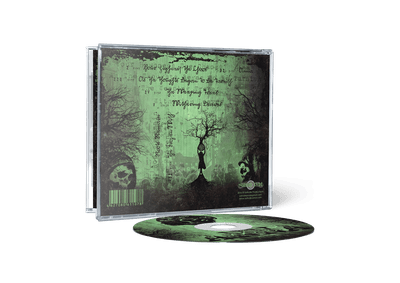 The brand new fifth album by the German project Doomed significantly progressed in composition and performance of technical death doom metal. On the one hand, the project mastermind"s tendency towards conceptualization the material and the artwork is obvious, together with an effort to create a thoughtful, high-quality album featuring guest vocalists (this time including Camel Of Doom member). On the other hand, there is a tendency to complication of compositions and use of brutal interludes preserving, nevertheless, melodic side of the music. The progressiveness of this album is among the main album features to be discovered by a listener.

Doomed, a one-man death/doom project formed in 2011 turned into four-man-band, have released their latest effort Anna. This concept album deals with political and religious fanaticism. As I’m typing out this review on the night when the votes of the 2016 US presidential elections are cast, I feel closer than ever to this album.

Anna is a mix of horror movie atmosphere with fast-paced death metal. It is a haunting album, telling us the story of a dystopian future that might be nearer than we realize. Anna has layers and layers – when I first listened to the album the depth of the material did not dawn on me yet, and I was unsettled by the creepiness of the horror movie atmosphere. A few listening session later, and I appreciate how beautifully the different layers of the work blend together.
To wrap it up: Anna by Doomed shows us a new take on funeral doom. The funeral is gone, and the zombies have come out. Our past poor decisions come to haunt our present moment. Recommended: this album requires exploring, not just listening.

Well, I think I may just as well come out and say it at the beginning: as far as I’m concerned, Doomed are, quite simply, the defining Death/Doom band of this decade, and have well and truly earned their place amongst the truly classic bands of the genre. Bold, and not a little gushing, you might think. Well, yes. But also, I consider, entirely justifiable; and not without some lengthy deliberation, given that I’ve been mulling over what to say about ‘Anna’ for a few weeks now, particularly given that it’s following on from an album – last year’s ‘Wrath Monolith’ – that I felt compelled to rate as a perfect 10/10 refinement of the Doomed aesthetic.

But perhaps that’s what differentiates the superlative from the merely great: assuming you can reach that initial pinnacle, where do you go next, and what do you change along the way? In this case, the answer is largely “focus”. Previous Doomed albums have been sweeping blunt instruments, suffused with a boundless anger against the petty stupidities and cruelties of humanity, rigid orthodoxies, unquestioning and blind obedience: their unambiguous calls to arms unleashed like a force of nature, and none the poorer for taking brutal aim at different targets within the same thematic range. ‘Anna’, however, is more of a sharpened naked blade, directed at the specific concept of how the innocence of children is destroyed, and told through the individual experiences of the titular girl, growing up during the Second World War.

It is no more dewy-eyed and sentimental than its predecessors, no less raging against the machine: in that respect, it’s entirely fitting that the look-and-feel of the packaging continues the series (this time supplemented with images by German artist Käthe Kollwitz, 1867-1945, noted for her lithography/etching work showing the suffering of the working classes). Other subtle touches, illuminating the mood of the backstory, can be found in the use of Sütterlin script: the last evolution of historical German broken blackletter typeface, banned in 1941 for being “Jewish letters”.

Nonetheless, ‘Anna’ is also quite different to the previous albums: largely in the development of the Progressive Metal elements initially hinted at on ‘Wrath Monolith’. There’s no lack of the melodic Death/Doom core that hallmarked previous outings: massive, choppy, variable riffs flirting with dissonance and contrast, full of harmonics, and offset by deep growls over a solid battery of bass and (programmed) percussion. As ever, there are appearances by various guest vocalists (Ed Warby, Kris Clayton, Markus Hartung, Uwe Reinholz and Daniela Laube), all of whom deliver sterling work, whether complementing or contrasting Pierre’s own voice. But there’s also a more complicated structure within the tracks, as well as one linking them, joining the concept together in a more or less continuous flow, and presenting – at times – an almost-cinematic experience. Opening the album: a haunting guitar melody, distantly soft crooning lullaby, the sounds of marching footsteps…and then the screaming, explosive crash into the body of the track – it’s all too vivid a picture Anna’s of orphaned nightmare beginning. Other authentic-sounding samples and songs weave threads through the rest of the album – most disturbingly effective, the jaunty dancehall number at the start of the furious ‘Withering Leaves’. It has a feel similar to the original ‘Bioshock’ videogames: once-sumptuous art deco environs decaying into a dystopian, threatening menace. And the title track and brief classical piano instrumental ‘Roots Remain’ are closer to being tragically emotive than anything in past releases, though still stopping short of being manipulative.

Anna survives, it would appear, by refusing to surrender: her inner self becoming hard, strong and rooted as the metaphorical tree. No glib answers are provided: questions are left hanging as to what she, and uncountable others, might do or change with that survival. There is an elaboration on that, in the bonus tracks, especially ‘Remembrance’, which adds a personal coda that the lessons of the last great war are in danger of being forgotten, and that Anna’s legacy and memory should not be lost or abandoned in that way.

‘Anna’, despite its gentler moments, is not an album that offers much in the way of comfort. It presents a brutal, unflinching premise inside an equally uncompromising musical framework. There’s nothing pretentious or florid about the Progressive nature of it; more of a purist technical and structural pushing of boundaries through the incorporation of unexpected elements, and the use of rhythm and tempo changes to drive the musical dynamic. Although there are moments of virtuoso skill on display – such as Uwe Reinholz’s guitar solo at the end of ‘Withering Leaves’ – the compositions remain balanced and grounded, without any trace of over-indulgence. As you would expect from previous outings, the execution and production are detailed and flawless. Above all, it is still totally, unmistakably, and uniquely Doomed, and I have nothing but respect for the way that all of those factors have been near-seamlessly drawn together into this tighter, sharper, and yet broader-ranging conceptual vision. Somewhat alarmingly for scoring purposes, I am beginning to suspect that Pierre’s talents can, and will, stretch even further than this, but, nonetheless, as an absolutely essential album easily amongst the handful of top releases of 2016, I’m going to mark it accordingly.

(As an aside: once again, for a lucky few, the special limited edition comes in a unique hand-finished and personalised wooden box with extras including a CD of bonus tracks. Loath though I am to increase the competition for any such future releases, these really do set a bar for presentation of collector items as high as the one for the music they contain).

“Anna” is the first album that dragged me down to the world of Doomed. And I must say the journey was quite tough thing to do! Forget about boring low-paced tempos and lazy drum beats – your face will be melted off by blastbeats and astonishing solo busts while deep monstrous growls take its way to devour your soul. Got it?
Now let’s take a closer look on this extraordinary record. Doomed is one-man project from Germany and is leaded by Pierre Laube – talented multi-instrumentalist and also the man behind the mic who gave birth to the all the things we hear on CD. “Anna” is his fifth solo effort, the album was released recently by the Solitude Prods.
The music itself combines not a few different elements and result may vary: fast tremolo parts with energetic drumming change into huge crunchy doomy riffs in a blink of an eye, adding avant-garde solos here and there. By the way it has been noticed that Pierre is in love with harmonic minor scale, using it quite a lot. And its’ specific sound makes songs more…Eastern (even makes me recall some Death or Nile stuff). It’s a cool feature indeed.
Vocals. As said before beside low growls you’ll hear a female voice too and it’s not overused, so most of the time your ears will suffer (in a good way only!) under the powerful roars.
Output can be described in three words: huge, progressive, doomy. Even you’re a true oldschool-ish doom fan – you must give a listen to “Anna”!
Highlight on the album (as for me) is “The Frozen Wish”.
Period.

This is the fifth album from Doomed, a German doom/death one-man project.

Although Doomed are essentially a one-man band, there are also a plethora of different guests on this release helping to flesh out his vision, (including members of Hail of Bullets, 11th Hour and Camel of Doom, apparently). Some of the guest vocal performances enhance and complement the main delivery of the songs, and once again show what an exciting prospect this band is.

Both Our Ruin Silhouettes and Wrath Monolith were top quality releases. Wrath Monolith in particular was one of my favourite 2015 releases, (although I didn’t include it in my best of list for that year for some bizarre reason), and probably one of the best examples of how to play the death/doom sub-genre with passion, intelligence, talent and interest.

Doom/death is quite a specific sub-genre, and one of the many things that makes Doomed stand out form the crowd is the ability to recognisably play the genre while also attempting to do a few non-standard things in the guitar department and with the songwriting in general. The end result is that the music produced is instantly recognisable as doom/death, but with a very personable spin on things.

The latest album, Anna, has all of the familiar elements firmly in place. Heavy, crunchy rhythm guitars, mournful leads, winding solos, satisfying drums, tasty riffs and deep, deep growling vocals. Oh, and another green cover, which is somewhat of a consistent, long-running theme at this point.

The riffs on a Doomed release are always extremely enticing. The guitars manage to mix heaviness, catchiness and emotional weight all at the same time. Anna is no exception and there are some very special touches on this release. The man behind Doomed is a supremely talented songwriter.

Something else I love about Doomed, (and really, there’s loads of things), is the growls. I’m sure that to some people they’re unexceptional – standard cookie-monster vocals I suppose, in some ways. To me, however, there’s just something deeply, deeply pleasing about them. The way they’re performed is just perfect for my tastes, and every time I hear the deep growls I just get that little thrill of excitement. Combine that with the crushing heaviness of the guitars and everything else that you have going on here…well, I could listen to Doomed all day long.

Anna is a first-rate album and once again sees Doomed at the very top of the doom/death style. If you want a perfect example of how effective and captivating doom/death can be, check out Doomed.