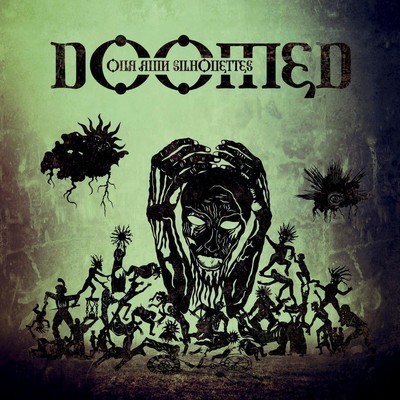 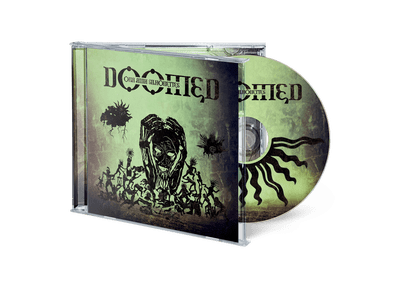 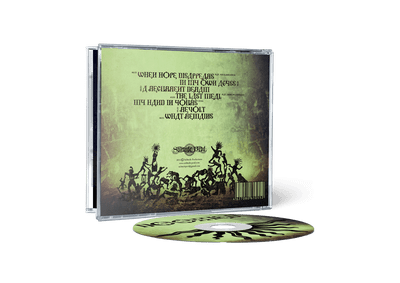 The third album from German band Doomed continues the dark affair of Pierre Laube started with his previous works: traditional sound based on powerful harsh rhythm guitars, low accented bass and intensive solo guitars – everything is fully packed and ready to shake the surroundings! «Our Ruin Silhouettes» ia a perfectly found balance between uncompromising brute and heavy doom death metal in the classical vein and non-sentimental melodicism. Pim Blankenstein (Officium Triste and The 11th Hour) and Andreas Kaufmann (Hatespawn and Charon (DE)) appear as the guest vocalists at the album. And, finally, Doomed have managed to provide their fans with conceptual album art inside 12-page booklet.

Doomed are a 1 man band from Germany that plays a mixture of doom and death metal and this is a review of his 2014 album "Our Ruin Silhouettes" which was released by Solitude Productions.

Dark avant garde sounds and melodic chanting start off the album along with some reverb and a few seconds later the music goes for a more heavy and atmospheric doom metal sound along with some deep death metal growls and powerful sounding bass guitars and after awhile melodic guitar solos and leads become a part of the music.

All of the songs are long and epic tracks and you can also hear some high pitched screams in certain sections of the recording and the melodic chanting of the beginning track makes its return in certain sections of the recording and after awhile the music starts utilizing clean parts mixed with the more heavier ones and the bring in ambient feeling to the music and there are also some guitar riffs that have a small amount of prog traces in them.

On the 4th track the music starts to speed up a bit and you can hear a great amount of old school death metal elements being mixed in the music along with some semi blast beats before returning back to a slow doom metal sound that also use s keyboards and a more atmospheric background and one of the later tracks uses a small amount of spoken word parts and except for maybe one track the music for the most part sticks to a very slow doom/death metal direction while there are also soft parts being utilized on the last song.

Doomed creates a very interesting style of doom/death metal taking this musical genre and building upon its foundations to, create on of the most original and probably one of the best albums this genre had had in awhile, the production sounds very professional while the lyrics cover dark and depressing themes.

In my opinion Doomed are a very great sounding melodic, atmospheric doom/death metal project and if you are a fan of this musical genre, you should check out this album. RECOMMENDED TRACKS INCLUDE "In My Own Abyss" "My Hand In Yours" and "What Remains".

You know it's a Doomed album immediately. That distinctive green/brown cover, overlaid with dark and wickedly sinister paper-cut images, links it directly to predecessors 'In My Own Abyss' and 'The Ancient Path'. The quality of packaging, once again by Solitude Productions, is just a little more lush and generous than before: the enclosed booklet now offering extra pages of art, as well as all lyrics and other information.

That gives a hint as to what to expect from the latest chapter in Pierre Laube's solo project work, 'Our Ruin Silhouettes': both continuity from, and refinement of, the quality set by the two 2012 releases. Those established a solid merger of dispassionately melodic lines and blunt, brutal rhythms, treading an effective and individual line between accessible and extreme Death/Doom, and any listener wanting more of that is not going to be disappointed.

There's more to it than simply being the third chapter of the same book, though. Yes, the trademark elements remain: hefty bass and well-managed drum programming drive the generally mid-tempo paces, layers of hard-edged rhythm guitar and occasional synth ornaments add depth and body beneath sharper and more precise leads, powerful and deep growls dominate the vocals, and the production gives them all a pleasing clarity and forcefulness. But it also sounds as though the longer intervening break has been put to good use, allowing time for a greater maturing of the composition, both at track and album level. There is more variety within the songs, which also incorporate a greater range of interesting intro/outro sections - such as chants and other effects - and they are laid out to give more contrast and variation across the whole. All, perhaps, perfectly demonstrated by the way the album opens with a Latin liturgy rather than a power chord.

Of course, there are power chords to follow, once 'When Hope Disappears' gets into its moderately fast stride: aside from featuring guest vocal contributions by Pim Blankenstein, it has that typically massive, slightly abrupt, sound which lets the listener know they are on something like familiar territory. Something like - for there are also moments like the martial drumbeats of 'In My Own Abyss', the high-speed sections of 'The Last Meal' (also featuring additional vocals, from Andeas Kaufmann), the spoken-word passage in 'My Hand In Yours' and the hoarse whispering in 'Revolt' to add twists and turns to the plot. These serve to subtly yet definitely break up the slightly monolithic deliveries exhibited on the preceding albums, not to alleviate the overall sense of dense, crushing doom, but to refocus the listener on it. As a result, although the core techniques and values remain the same, the additional compelling of attention imbues them with a greater intensity and sense of purpose.

It would be hard to identify any serious criticism here, evolving as it has from what was already an impressively high standard. The tracks, all hovering between the six- and nine-minute mark, unfold without dragging or overstaying their welcome, centring around the expected themes of confronting loss and ruin at both a personal and societal level. None show any weakness, and the high points of 'In My Own Abyss' and 'Revolt' exemplify the progression made by the album. Accessible as the music may be, it most certainly isn't uplifting: the rawness of the debut may be a distant memory, but the immense, bleakly powerful nature of it is definitely not.

To conclude, then, Doomed remains a largely prosaic entity: the music and lyrical content just as much so as the band name. All of those, matter-of-factly, take a blunt presumption of the grimness of existence and give that a clear, unambiguous, unsentimental voice. Even the continuing (and excellent) graphic theme is direct and to the point, leaving little room for metaphorical interpretation. That isn't any kind of failing; it's a statement of intent, and 'Our Ruin Silhouettes' fits in perfectly with that unfolding manifesto. And so, to match it with an equally prosaic summary: this is Doomed. But better.

Doomed, hailing from Saxony, Germany, have released another great addition to the sub-genre known as doom/death metal -- a personal favourite of mine. Standing proudly alongside titanic heavyweights such as Officium Triste, Maleficium, Mournful Congregation, Novembers Doom, Winter, old Anathema, old My Dying Bride, etc., Doomed know their craft well, and have captivated my attention since their 2012 debut, _The Ancient Path_. The band's particular approach to gloomy, desperate moods, and the oftentimes unpredictable sonic landscapes they give rise to are what I'm always looking for in a doom/death album.
Though some of the elements found on _Our Ruin Silhouettes_ are common to the sub-genre (low guttural vocals; heavy guitars and bass; dolorous and occasionally melodic riffs; and drum beats which match the heaviness of a Neanderthal's lumbering gait) Doomed offer something a little different to doom/death fans. As difficult as it is to bridge the gap between the emotional resonance of music and words (it always takes a very strange form of translation to do so), I'll make an attempt. There's a strangely calming, heavy serenity about _Our Ruin Silhouettes_. Was this last statement somewhat oxymoronic? Yes. How could something be calming, serene yet heavy? Well, it all comes about -- with Doomed anyway -- in a trademark play of contrasts featured in every song.

There's a certain resident heaviness to the guitar tone on _Our Ruin Silhouettes_, and it's accompanied by a very clear, very heavy bass guitar tone, too. They go together really well, and I love the sound. However, this is all offset perfectly with a lilting, wavering and eerie clean guitar sound which follows -- rather in a ghostly way -- its own complementary path between the emotional dips and rises of each riff. This is what adds originality to Doomed's sound for sure. The one thing that I found to be really different with _Our Ruin Silhouettes_ compared to the previous two albums was the introduction of a blast-beat on the song "The Last Meal". This is an aggressive beast which seems to snare the listener into an uncomfortable grip before it lets go and gives way to a slow-paced and mournful doom song.

If you're into doom/death metal, then listen to _Our Ruin Silhouettes_; and if you like it, support the band in any way you can. Oh, did I mention that each Doomed album was written, arranged and performed by Pierre Laube himself? If you've lucky enough (and if you live in the EU), you might even catch the band playing live -- with session musicians, of course.