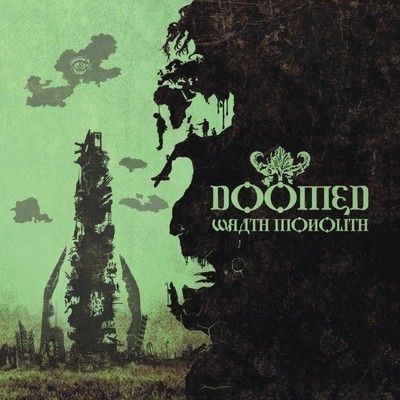 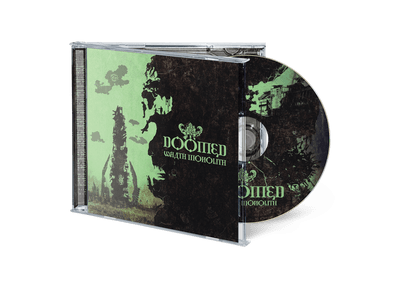 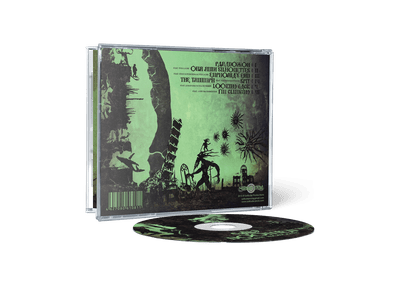 The fourth album of the German band, designed in the style of previous Doomed works, continues to present canonic doom death metal, rigid and uncompromising, but more vigorous in terms of performance. Guest vocalists, including Johan Ericson (Doom: VS), Ed Warby (The 11th Hour) and Stanislav Govorukha (Suffer Yourself), bring new paints and emotional colors to the album. At this time, however, changes occur in band ideology: this concept album considers the crisis of the modern world, with its conflicts and human sins, forcing musicians to reconsider the understanding of society and to seek ways out of this situation. Solution to all problems is on top of the Monolith. Monolith is growing every day, so it is impossible to reach the top...

Images, sad and depressing. Vestiges of us, them and everything else. A colour-scape grim and empty as draws in and repels at the same time. An all-seeing eye embedded in a geographic-looking cloud. Coming against the limit of a green, depressive haze, a seemingly all-encompassing mass edges slowly toward Europe. It's a black entity, moving with a determined and measured pace, it's not stopping as it swallows Europe, dripping in suffocating accuracy its way into some sort of meaningless abyss. Africa is next. And beyond this, the world. As people watch, awestruck, their only recourse is either death or a catatonic stupor. As the reach of demons invade the northern shores of Scandinavia, a priest straddles a precarious line. His religion literally dissolves around him, and he knows it. Like a broken tooth, Jesus submits -- crooked, broken and used -- to a lower, irresistible power. He's caught now, like the sun he turned toward in his youth, in a moment of over-exposure. Heaven only exists in his head, and he feels the blackened edges of a counter-reality slide beneath him and draw him toward a dull pulse where only grey and white might exist -- it's all night here, brought on by a moon-rise of nothingness, absolute. No, we're not greeting salvation of any sort here; nor a place of endless rest, but a certain form of potentially comforting destruction; one orchestrated by none other than ourselves and the silhouettes we hide behind while we continue our ruin. If there's a wake that ripples behind this senselessness, it's nothing more than a monolith of wrath; a wrath monolith kept stable and endless through helplessness, pity, despair and shock. The shock that the only thing, maybe the only constant that remains in the destruction of ourselves, our environment, our cares, our dreams, our politics, our desires and their targets -- is the fury, the spleen, the outrage that we've ended ourselves before we can stop it...
The aforementioned paragraph not only best describes the music of Doomed's latest offering, _Wrath Monolith_, it also renders the beautiful cover's stark images into words, as discomforting as they are. Building on the previous three masterpieces of atmospheric doom/death, mastermind Pierre Laube, pushes his creative borders further and further away from the contours of classic doom/death à la Anathema, My Dying Bride, Paradise Lost, et al. After my first few listens of the album, accompanied -- of course -- by a transfixed gaze at the cover art, I realized that Laube's fourth exercise in creativity led him into far more progressive waters, the depth of which seems rather limitless in terms of sophistication, maturity and emotional captivation. This is far, far more than death/doom now -- a different affair entirely. In fact, what I will say is that Doomed, to me anyway, seems like the Enslaved of doom. Odd time signatures, interesting and almost contemplative riffs that slither hither and tither with an aim to lead you down a counter-intuitive hole. Spoken word, both clean and filtered through effects, cross over and between the comforting hypnotic effect of clean guitars. These are always held hand in hand with heavy riffs, a clean production that articulates the ferocity of sparse-blast beats and low-end growled musings of missed opportunities of repair, this all leads to a sharp and quick realization that _Wrath Monolith_ is to be grasped carefully in its immediacy. This isn't an easy listen at first, and therefore takes time to fully appreciate what's being explained to you musically.

Continuing, like the previous albums, there are a number of guest whose appearances make this album only that much more enticing. To name just two: Johan Ericson of Doom:VS and the ever-talented and versatile Ed Warby both appear on the track "Looking Back" -- a stunner of a song in all of its anxious existential displacement! Since there are really no other doom/death oriented bands able to pull off a more progressive and avant-garde interpretation of the genre, I would make sure to spend some time with Doomed's _Wrath Monolith_. In order to truly appreciate this album's creative and progressive reach, I would suggest listening to _The Ancient Path_, _In My Own Abyss_, and _Our Ruin Silhouettes_ first. Each album, although different and unique, paves a path of bitterness towards this latest monolith of depressive expression. As always, I cannot wait to see what Mr. Laube does with his next musical creation!

Though this German band (or maybe a project, as everything is created by a single person...) with a really simple name is already known in the Doom Metal scene, I always considered them to be just another band under the wing of “Solitude Productions”. The fourth studio album seems to have broken the bars of my heart too. The release sounds as heavy as ever - strong and convincing. The music, dominated by good old Death/Doom, is conveyed via nice recording, accommodating a good dose of modern Metal. By the way, it doesn’t decrease the value of the album or songs. Quite on the contrary - it becomes multi-faceted and even more interesting. As others also noticed, the album has some progressive decisions (especially in the clean backing vocals), which, compared to the tendencies of modern Death/Doom gives a “progressive” label to Doomed.
Fans of My Dying Bride will definitely like “Wrath Monolith”. I also feel some parallels to Chileans Mar de Grises. The disc has enough heaviness, strictness and melodiousness. The trump card of the album - guitars performance, which shines in every song with convincing and easily memorable melodies. Just listen to “The Triumph - Spit” and you’ll understand what I am talking about. Though I also have to admit that sometimes it sounds a bit boring - this is a result of prolonged melancholic episodes. Overall the new album finally showed an eruption in the band’s creative potential. It does not shine with innovations, but progressiveness, musical creativity and great sound quality will please ears as much as My Dying Bride’s records.

Being a Doom review site, it'll come as no surprise that we discuss new releases between ourselves: from anticipating them, with varying degrees of enthusiasm, all the way through to passing judgement on the final product, with - usually - even more varying degrees of enthusiasm, and often some agreement to disagree. There wasn't much argument about Doomed, however, with the clear consensus being that the band is absolutely at the top of the contemporary Death/Doom tree, making 'Wrath Monolith' one of 2015's most eagerly-awaited albums. Not much argument after we'd heard it, either, and for much the same reason.

You should be familiar with Pierre Laube's solo project - operating out of Zwickau in the former GDR - by now. With three albums already in the can, each one showing a steady progress in melding the blunt and the bleak with the melodic and the atmospheric, and all now widely available through the mighty Solitude Productions, there's really no excuse for having missed out. And if that's the case, you'll already have an idea what'll be lurking within the trademark green and black cover, gorgeously-illustrated with elaborate handmade paper-cut silhouettes (this time, provided as a fold-out poster, to get the full effect of Pierre and Ina's darkly intricate work).

That idea will probably be correct, to a large extent. Doomed, as a project, has evolved by refining and developing a core sound, rather than by taking any major changes of direction. The familiar elements remain: massive, heavy riffs delivered with that distinctive, loping, off-tempo variability, rumbling bass and often-frantic percussion, Pierre's deep, dark and forceful growls, gentler moments of intricately-textured guitar flirting with dissonance and contrast. Added to those, though, are an increased variety of effects and ornaments - keyboard and synth effects, spoken word sections, clean and choral voices - and a number of guest vocal performances (including repeat guests from the last album and such new luminaries as Johan Ericson of Draconian, Stanislav Govorukha of Suffer Yourself, and the - previously unknown to me, but excellent - shrieks of Anny Bauermeister). Additional guitar is supplied by Pierre's brother Yves, who is also a member of the Doomed live and touring band.

With all of these to hand, it could be possible to over-adorn things, but, in fact, they are used to perfection - full enough to add a real sense of vitality, sparingly enough to avoid losing direction and purpose. And there is a strong, growing sense of purpose in the way Doomed elaborates and focuses its author's anger at human blindness and injustice, conveying it a little more clearly each time. The biggest step up for the preceding 'Our Ruin Silhouettes', for me, was the improved maturity of sound and production: to that, 'Wrath Monolith''s hallmark is the building on maturity of concept and completeness. Nothing sounds out of place, nothing is wasted, and the seemingly endless flow of killer hooks and leads sweeps you inexorably along, breathless between the solemnly eerie intro to 'Paradoxon' and the quiet piano fade-out to the brilliantly venomous male-female vocal duet of 'I'm Climbing'. I'm not going to attempt to namecheck highlight moments: as far as I'm concerned, the album simply doesn't drop away from top-quality at any point.

If you're lucky enough to have one of the 100 limited digipacks, or the ultra-limited 10 boxsets*, the extra two tracks provide a fascinating insight into other possibilities, with 'Stillborn' having something of a paced-up, off-kilter and synth-orchestral Abstract Spirit-esque feel, and 'Echoes Of Her Call' an almost-prog revisiting of 'She's Calling Me' from 2012's 'The Ancient Path'. It's clear why they're not an integral part of this beautifully brutal, utterly genuine, instantly recognisable yet subtly better-than-ever album, though - interesting though they are, they're a diversion from the intensity with which 'Wrath Monolith' unfolds.

Quite simply, this is as good a melodic Death/Doom album as any you'll ever hear, from a band that has carved out its own unique niche in the contemporary scene. There is nothing about it I could fault, from concept to presentation to execution: it is both essential in its own right and quintessentially Doomed in the way it exemplifies everything the project has achieved so far. Perfect. Just buy it.

* Note: Although not a part of the main review, I will mention that these hand-carved and individually-dedicated wooden boxes are an excellent work of art in themselves. I'd expect nothing less, given the attention to quality and detail intrinsic to Doomed, but would also like to commend the personal effort involved in making something like that 'for the fans'...