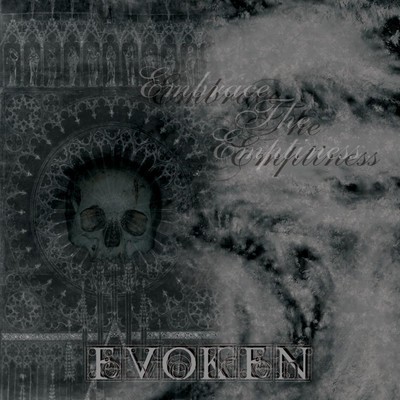 Solitude Productions proudly presents a long awaited re-release of Evoken"s album "Embrace the Emptiness", which has already become a cult one. This is the first full-length album of the band, which was previously released in 1998 by the American label Elegy Records with limited edition. So that"s why some time later it became an object of searching of all doom-metal fans all over the world. And now everyone has an opportunity to buy this album, published on "Gold CD" with a completely new exclusive design.

Originally released back in 1998 on Elegy Records, Evoken's debut soon went out of print, and at the same time left a massive legacy, simply by those who did own it speaking of it in hushed, revered tones to every like-minded individual who'd listen in their local proximity and beyond. This wildfire word of mouth left those doom/death followers around the world unfortunate enough not to own a copy in severe need for this album, forcing inflated prices on eBay and mad bloodthirsty scrambles in 2nd hand discount stores (well, for me anyway)… that is until Russia's Solitude Productions went and re-released the thing last year, of course.

Basically, Evoken are one of the strongest active doom/death bands out there at this present time, with this album being their Pièce de résistance (though, with that said, I've not heard their latest release 'A Caress of the Void' as yet). This is complete Thergothon worship (the band even took their name from the second track on Thergothon's 'Fhtagn nagh Yog-Sothoth' demo), which kicks out a really morbid reek of funeral atmospheres at a mainly slow pace, with cold echoing guitar-lines weeping over the solid tombstone like slabs of rhythm guitar, a veil of ethereal synthesizers coating hearts in a hardened veneer of solitude and misanthropy and whispered low growls telling chilling tales of misery from a grey world of utter desolation. What more would you expect from a doom death band anyway?!

As I mentioned previously though, Evoken are definitely one of the best out there doing this stuff at present, so you can be assured that the material on offer on this album is of the utmost quality. With their solemn melodies eating their way into your psyche, and their well utilized polar opposites of gentle piano lines weaving with ease around the low tuned crushing guitars, Evoken make music with huge depth for sheer doom-laden enjoyment on a phenomenal scale. Very much recommended – so make sure you grab it before it disappears from print once more.