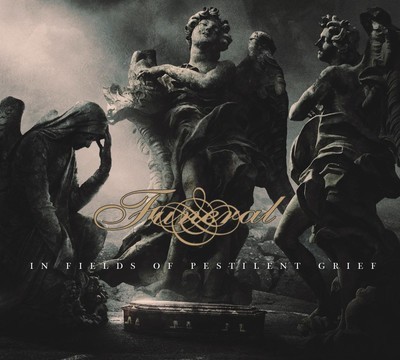 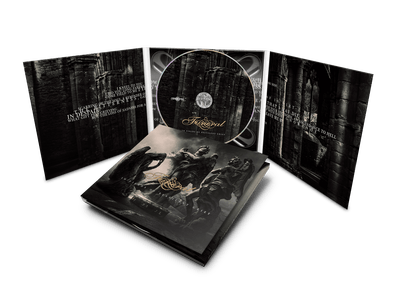 Solitude Productions proudly presents the re-release of the "In Fields Of Pestilent Grief" album by the cult band Funeral, which was originally released in 2001 with a limited number of copies by the label which does not exist anymore. The copies of the album were quickly sold out, and currently have become a rarity. On this album, the band tried the stylistics different from that for the debut album, which featured funeral doom metal: although the leading clean female vocals remained, the music began to tend to doom death metal. However, it is worth mentioning that Funeral remained one of the distinctive and unique bands in the genre. Two previously unreleased tracks, demo records for the album, with other arrangements and male vocals come as a bonus tracks in this re-release. The album is issued as a noble six-panel digipack.

As mentioned in connection with the massive compilation from Solitude, early albums from Funeral and Fallen was re-released half a months ago. And they have more in common than being re-releases on the same date, by the same label, with material from the early years of the millennium, and the letter F. Both are in addition from Drammen, Norway, where three members' been involved with both bands, while also moving about in the same musical territory.
However, the similarities ends there.

Disregarding a minor break, Funeral has been active since 1991. The only remaining original member is drummer Anders Eek, who's also done percussion in Glittertind and Myrkskog. Curiously enough, he is also the only remaining original member, in fact the only current member at all, in Fallen.
The dйbut Tragedies was released in 1995, but it is the sequel In Fields Of Pestilent Grief from 2001 we're going to take a closer look at this time.

Apropos curiosities, Idar Burheim, better known as Archaon of 1349 fame, is one of two guitarists on the album. Talk about the extremes of pace, for Funeral is (as the name suggests) not among those who's in most of a hurry to reach the finish line. Approximately 55 minutes is used on completing the album's ten songs, and here we're also offered two demo tracks as a bonus. These got male vocals, which gives the songs a different feel.

The bands death/doom's got heavily influences of funeral doom, and with Hanne Hukkelberg (later with a musical career outside of metal) on vocals, the album also take on a strong gothic twist. The first two albums is also the only ones with female main vocalist.
The band appears here as a very melancholic and depressive offspring of the gothic metal scene of Stavanger, Norway. No virtuous fiddle tones or other merry antics is to be found in this mournful adaptation. Very little light and hope, indeed. Only sorrowful melancholy where the closest thing to light is the mellow opera-sounding female classical soprano, and its plea for better times.

In Fields Of Pestilent Grief doesn't appear to have as strong songs as later releases. The album in its entirety, and the songs separately, lacks a little direction and coherence. The album is pleasant enough to listen to, if you have patience, but can hardly be characterized as more than pretty good.

It was six years ago that I discovered the Norwegian band Funeral. My entrance into their discography was their utterly bleak, monstrous classic 'Tragedies'. Captivated by their morbid guitar melodies and haunting clean vocals, I realized very quickly that they would be a band I would closely follow from then on out. As I explored their albums throughout time, I took a particular liking to the era which begun with the aforementioned 'Tragedies' and ended with 'From These Wounds'. Between those two albums, which seemed to have gathered the most attention from the Doom scene, I found that their third album, 'In Fields of Pestilent Grief', seemed to have been forgotten entirely. Fourteen years have passed since the album's initial release and, though the original record went out of print long ago, Solitude Productions has finally brought it back out to the light of day.

One could see it as though this album was the black sheep of the band's selections. I find that the band's trademarks tend to focus on excruciatingly slow tempos and utterly dire moods. 'In Fields of Pestilent Grief', however, is very aggressive, riff-driven, and consequently, more accessible. The music on this album is mostly based off of a template of heavy, guitar-driven Melodic Doom, not far from something one would hear from Isole or perhaps Paradise Lost during their 'Icon' era. Yet, while one could expect some epic tenor or gravelly baritone vocals to complement the music, the listener is instead greeted with a wailing soprano voice.

Perhaps it was the driving tempos and operatic lead singing of Hanne Hukkelberg that caused this album to be so neglected, or the limited release of the album itself. Regardless, I find that this album is very well-done and worthy of the attention that it's lacked for such a long time. As I've always felt this way for the release, it feels as if now is the time I gave it some recognition.

This album was a pivotal point for Funeral, overlapping two majorly different eras in their career. As the female vocals that heightened the somber nature of 'Tragedies' are still present, the harsh male vocals of Einar Andre Fredriksen (who, unfortunately, died shortly after the release of this album) are gone. Meanwhile, this album would also introduce layered vocals and a more melodic, Gothic-tinged atmosphere, both of which would play big roles in the band's more recent outputs.

The first main abnormality to 'In Fields of Pestilent Grief' is the heavy usage of reverb. All of the instruments have an incredibly resonant quality to them, as if they were being played in a cathedral or stone temple. Everything echoes, drones along, and drifts out, even the drums. The rhythm guitars seemed to be placed in the foreground, with a crunchy and deep force that drives the rest of the ensemble. The lead guitars screech and soar with a velvety tone, creating some surprisingly elaborate solos at times. The drums mostly consist of some mid-tempo and faster patterns, but occasionally take a step back and allow for some ultra slow passages. As I stated before, Hanne's voice is incredibly high-pitched and, more often than not, appears in multiple layers and harmonies. Her inputs have the most reverb placed upon them, much like the way Stoner bands tend to use a lot of effects on their vocals. In this case, however, the usage of such effects doesn't make for a psychedelic vibe, but more or less an ethereal, siren-like quality.

The atmosphere in the songs is a bit difficult to place. The mood lies somewhere between sorrow, romance, anger, bitterness, and nostalgia. Aggression and menace take place, most notably, in tracks like 'The Repentant' and 'Facing Failure'. Within those particular tracks, the guitar melodies have the most malice and a harder kick with some busier rhythm lines, bordering on Death/Doom with their vengeful and bitter moods. Then, there are melodic anthems such as 'The Stings I Carry' and 'When Light Will Dawn', which lean more towards Epic Doom, with addictive lead melodies, solemn clean sections, memorable vocal passages, and a more heartfelt atmosphere. The former of the two tracks is my personal favorite, as the song's main melody is one of the most majestic guitar passages I've heard in the genre altogether. The song also stands out to me in Hanne's emotional delivery of the song's main verse:

Summon the winds and swear,
'If ever my God you were,
like silver in the morning fields,
I'd give my life for you.'

The rest of the songs are considerably more upbeat and, dare I say, a bit catchy. Opening tracks 'Yield to Me' and 'Truly a Suffering' are both simplistic and easy on the ears, with chugging riffs and alluring vocal lines. Then, there is 'What Could Have Been', an up-tempo piece that borders on pure Gothic Metal, with soaring high notes from Hanne, a dramatic atmosphere, and some rather fast paced drumming. Lastly, there is 'Vile are the Pains', in which the female vocals disappear and we are instead presented with male singing. The vocals seem to consist of dual harmonies between Kjetil Ottersen (who would later be known for his work with Fallen and Omit) and Øystein Rustad (whose mournful voice would also pop up on the band's redux of 'To Mourn is a Virtue'), alternating between some gloomy deep cleans and inoffensive grunts. A bleak main guitar melody bleeds and fades throughout the track while the rhythm section chugs out some Death/Doomy riffs that wouldn't have sounded out of place on an album like 'Turn Loose the Swans'. This track foreshadows the deep cleans that would appear on the band's later outputs, as if the song were placed at the end of the album to connect it to the release which came after it, 'From These Wounds'.

Lining the middle and close of the album are two instrumental pieces, the first being the title track, and the other being an Epilogue track. These are quiet keyboard tracks which, generally, were placed there as filler and don't really add much to the album. The same could pretty much be said about the reduxed versions of 'When Light Will Dawn' and 'The Stings I Carry'. The two remade tracks appear as rough demos with a fuzzy guitar tone, subdued keys, and vocals from (who I assume to be) the band's current singer, Sindre Nedland. His clean singing fits pretty nicely into the pieces, and his voice is placed closer into the foreground than Hanne's voice initially was, allowing him to enunciate the lyrics more clearly. However, when he attempts to sound gravelly or menacing, it comes off as awkward and somewhat goofy. Had they kept him with the smooth and melodic vocal sections, and given the redone tracks a proper sound recording quality, they would have perhaps been on par with the originals.

After the unfortunate 'To Mourn is a Virtue', which was meant to be a remake of tracks recorded during the band's sessions in the late 1990's, I am very pleased that 'In Fields of Pestilent Grief' has been re-released and properly honored in its original form. Generally, the album itself is a tasteful piece of Melodic Doom Metal that retains an appropriate gloominess, while also pulling in tons of aggression, and topping it off with some very powerful vocals. While it may not top 'Tragedies' or 'From These Wounds', it's worthy of appreciation to those who seek to delve into the band's full discography, as I once did. It perhaps fits most comfortably in the realm of modern Gothic Doom, such as Draconian, The Foreshadowing, and Ava Inferi, and while its accessibility may be a drawback to many, it will be a treasure for those looking for melodic, female-fronted Doom Metal.