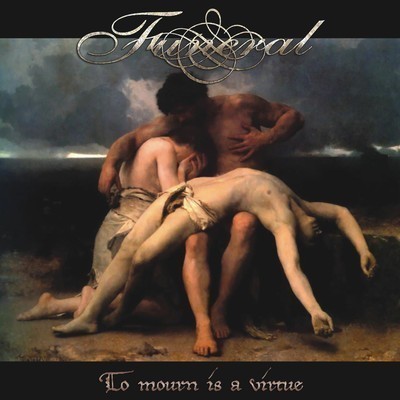 Solitude Productions proudly presents the legendary Norwegian band`s album «To Mourn Is A Virtue». This release is the missing link between the classic albums «Tragedies» (1995) and «In Fields Of Pestilent Grief» (2002). This album is based on unreleased demo-recordings ,and contains nine previously unreleased tracks recorded between 1996 and 2004,remastered in 2010, almost 15 years after the moment they were initially recorded in the studio. «To Mourn Is A Virtue» could become a surprising opening both for fans of the band and those who are interested in the genre. Funeral, regarded as one of the first bands in the funeral doom metal genre, further evolved to a more doom/ death metal approach, now presents a classic doom metal record.

When considering the influential bands of the early to mid-90’s Doom movement, the same names are always offered up, yet one that rarely seems to get a mention is Norway’s Funeral. Contemporaries of the My Dying Bride school of woe, Funeral have had a difficult and at times very disjointed upbringing. ‘To Mourn is a Virtue’ is a compilation of songs from the most fractured period of the band. Originally recorded as a set of instrumental tracks in May 1996, the tracks here have been reworked over the next 14 years and a variety of singers used. The end result is what they describe as the missing link between 1995’s ‘Tragedies’ and 2002’s ‘In Fields of Pestilent Grief’

Musically, this is like a time capsule. Swathes of early Anathema and My Dying Bride pour out, with mournfully beautiful guitar riffs hitting the mark just so. Vocally things are varied, with three different vocalists adding their talents to the album, the first of which is Frode Forsmo whose voice is confident and assured, and with layering often sounds like a group of chanting monks. Frode is probably the best of the singers on here, sounding in particularly fine voice on ‘Hunger’ and ‘God?’, a song with more than the occasional nod to My Dying Bride’s ‘I Am The Bloody Earth’. ‘Your Pain Is Mine’ is a brooding classic, with superb arrangement and musicianship and a drummer that must be dosed up on night nurse in order to be able to play that slow. Listening to ‘The Poison’, and knowing that Funeral are good friends with MDB, my overbearing thought was just how good it would sound with Aaron Stainthorpe singing. It sounded almost as if it could have been written for the Bride, but nevertheless it remains an excellent Funeral track.

The second vocalist to add his talents to the album is Шystein Rustad, who was actually their sound engineer at the time of the ‘In Fields of Pestilent Grief’ album. The change in style is quite obvious, (although not as much as for vocalist no.3, but we’ll come to that later), as Rustad has a strong yet wavery voice, which does not suit quite as well as Forsmo. That being said, he is more than competent, and at his best as on ‘Blood from the Soil, he sounds captivating; yet at his worst as on ‘Father’, things can degenerate into a cacophonous mess. Also, rather incongruously, he sometimes breaks out into a bit of a Layne Staley impression, as on ‘How Death May Linger’, which seemed like an odd choice to be honest. Rustad is clearly an excellent vocalist, but he cannot hold the attention in the same way as Frode Forsmo. On final track ‘Wrapped All In Woe’, Funeral brought in Sarah Eick, who previously provided vocals for their 1997 Demo also called ‘To Mourn is a Virtue’. That demo featured 5 of the songs from this album all sung by her, however this was considered to be the only track not improved by the new singers. Sara has an excellent, clear and strong voice, reminiscent of Tristania’s Vibeke Stene, and as a result the song sounds wonderful, but whether it sounds like Funeral is very much open to argument.

In various forms, ‘To Mourn Is a Virtue’ has been around for some time now, but never in such a complete fashion as this release. It does on occasion seem very slightly disjointed, like a collection of past demos stitched together and given a polish up, and if you looked upon it in a very literal sense that is what it is. If you were more generous however, and indeed this album very much deserves generous praise, then we can acknowledge that this is, as Funeral suggest, the missing link in their back catalogue. This is a fantastic disc full of classic doom from a classic band that has been honed and polished into the best versions that they can muster over the course of 14 years. Of course it’s going to be good!

All who know Funeral know that they are one of the highlights of depressing doom in an unorthodox manner. Here, the band releases a compilation of unreleased tracks and demos from between the eras of 'Tragedies' and 'In Fields Of Pestilent Grief,' their second and third album. It invovles lots of epic work- all remastered- that is very typical of the Funeral known for their album 'Wounds.' It isn't a link between albums necessarily, but more along the lines of B-sides and an urge to revisit old tracks that just never made the cut for full lengths. For new fans, it is not the usual funeral doom/ doom metal since it doesn't feature the standard growls. They are all clean vocals- very mournful and congregation like with an excellent droning effect that really makes one feel the depression behind the heavy guitars, which can be compared to the likes of bands like Draconian.

Highlight tracks include "Hunger" for just the reverb drenched guitar that goes along with the vocals well. "Your Pain Is Mine" has some beautiful piano involved. "How Death May Linger" has the synth behind the vocals when they moan away- very similar to Moonspell clean vocals or that of Rapture but more monk-like and suited well for the gothic doom era without seeming too over produced. It helps them stand out much more. With "Father" it is a perfect funeral orchestra musically, but also shows a louder sound which symbolizes possible change in between the history of the albums. Here- and onward with Funeral's work- the vocals tend to lose their echo effect and can become somewhat laughable with how sad they try to be during the choruses. This is the only downside, and thankfully it only happens a few times as the vocals live ip to their expectations. Finally there is "Wrapped All In Woe" which is another great doom metal opus, but features female vocal additions to make Funeral even more dynamic than they already all.

Overall, 'To Mourn Is A Virtue' is a great addition to any Funeral or melodic doom metal fan that wants something aside from the usual growl n' chug stuff. It will surely depress one in the most 'pleasant' way possible without being too crushing like death doom or too whining and melodic like gothic doom. Those who already own the demos from 97 and 99 have no need to get this as most of the tracks are from there, but it is a nice retrospective collection of songs that pretty much lives up to the Funeral testimony. The unreleased tracks are decent, but the remastered demos are the treue highlights. This really is only really meant for those who are just getting into Funeral or haven't heard their first three albums. Older fans can probably sink into it for a while they wait for the next 'original' album, but they may not get as much enjoyment out of it overall.

Let me start this off with a little bit of background information in terms of my perception and listening relationship with this group. I can safely admit that I am not a very big follower of Funeral or their underground legacy. I know of the band, as well as being familiar with sporadic bits of their material, but I don't know every album, every demo, every lineup change... I have just never cared enough about them to seek out that information. However, I was familiar with the demo release of 'To Mourn Is A Virtue' which came out back during the dark ages of 1997. I had liked what I heard then and, upon revisiting some of the material, I still like it today. I do know that since that release there have been significant lineup changes, there have been deaths within the band and I am somewhat aware that they've 'evolved' their sound.

With that having been said, I really want to know why the band felt the need to reach into their musical past, pull out this demo and say amongst themselves: "Hey, let's completely re-record this with the new members and newer sound, even though we've released 3 full length albums since it was originally recorded." It makes someone on the other side of the coin think that they had nothing better to do with their time than re-construct a demo that many had hailed as brilliant for it's time 14 years ago. It also doesn't make much sense for a band who is attempting to take their sound to the next level and somewhat distance themselves from their earlier roots would think this was a good conscious decision.

I suppose that the above statements will be enough of an opening stance, so that I may now tell you what to expect from this revisitation experience. The female vocals are almost completely gone (Except for a partial placement on the album's closing track) and replaced by two different vocalists for each half of the album. The first vocalist displays very average Gothic Doom style clean vocals, with fairly monotonous harmonized sections that sound a bit like a less talented Mikael Åkerfeldt (Opeth). The second vocalist is somewhat similar in style, as he too fits the Gothic Doom bill but has a much higher range that causes a bit of an earache as the album unfolds. The best thing about this album, to me, is the drumwork. Over time I've grown pretty used to straightforward and repetitive drum patterns in Doom Metal material, but that is not the case here. Not only does he show off a heavy array of different fills throughout the album, his rhythm patterns are pretty intricate as well and not a style you normally see within this genre.

One of the few things I really like is the piano work. The grand piano sounds used are magnificent, although they don't see a whole lot of time on the album, which I find unfortunate. Elsewhere, the guitar work on most of the album just screams mid-era My Dying Bride. The tones and chord progressions are the biggest culprits in terms of that accusation. Admittedly, though, these aren't terrible traits to have, as I do enjoy My Dying Bride's guitar sound. I merely expected more out of a band with the underground clout and reputation that Funeral has. One prominent issue I have is that while some bands can pull off having songs of a prolonged length, nearly all the tracks on this album just seem to drag along much more than necessary. Another thing to note is that the production, albeit crisp and clear, is lacking in terms of a noticeable bottom end and therefore comes off as sounding fairly thin during most of the songs. I also find a problem with parts of the mixing, as the drums can have a tendency to somewhat bury the guitars.

From front to back, I have to say that I'm not a fan of the album. A main point could be argued that if the band had a better assortment of vocalists for this recording, it definately could've worked in their favor. Maybe my feelings would be different if it wasn't a band re-recording a release that I was already familiar with, but what's done is done.