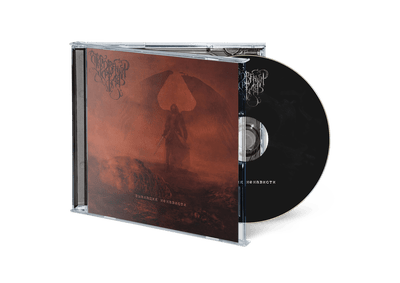 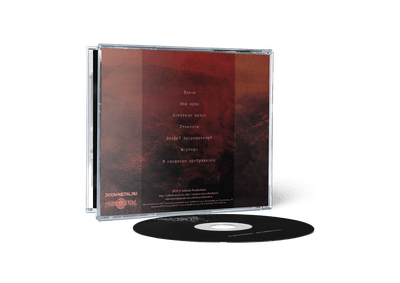 The third full-length album of the Russian band further develops ideas of the previous albums. Revelations of Rain presents high-standard uncompromising doom death metal. Even more heavy material featuring high record quality is close to early Evoken works and is saturated with depressive mood of estrangement and deep thoughts of world futility. Forget about violins, roses and romanticism: only gloom and hate fill this undoubted pearl of the genre. With their new record Revelations of Rain confirm their status of one of the best Russian doom metal bands.

'Emanation of Hatred' is already the third full-length of the Russian Revelations of Rain. You can thank me for these informations, because all you will be allowed to read is cryptic cyrillic. The band’s name, the album’s title, the lyrics and everything else is in russian. This is quite rare and respectable from a band that it decides to stay faithful to its roots up till the point of taking the risk of losing some potential fans on the road.
Revelations Of Rain is thus a name that doesn’t exist. It’s quite interesting how speaking of this band induces to consider it through some kind of blurred veil, watching it from a certain distance that language sets. This re-inforces the obscure edge of its music, making it sound even more mysterious.

Those Russian fellows dispay a genuinely good Death Doom, heavy and dark. It's all very sober, yet versatile to some extent. As their label Solitude Productions states in its presentation: “Forget about violins, roses and romanticism: only gloom and hate fill this undoubted pearl of the genre.” Well, indeed, you won’t have to bear that kind of decorum. It’s serious buisness: “Emanation of Hatred” says the title; not badly found: not totally hateful and aggressive, but, in a more subbtle way, hints of brutality and bits of violence. That’s the major flaws I would stamp on this album and on the band on a whole (I can , since I follow them from the start): it’s a bit too restrained, too modest. And maybe, too subbtle.

We are floating on a grey land where every aspects -melodic modulations, dynamics- are gently and sofly articulated together to write a dark and gloomy poem. I listened to this album four, five times, scratching my head, trying to decipher something; and yet, keeping it on heavy rotations, because I knew something was going on that was really good. I ended up claiming: “this album is excellent Death Doom!”, while I’m still quite unable to distinguish between the different tracks, each of them bearing the same kind of stigmata on the mend.

This is not to say that the album lacks any dynamics: as I said above, quite the contrary: the drumming above all sustains and leads the songwriting in a very clever way. Now hectic, now thunderous, it helps greatly to energize the whole. The growls are very deep and happen to mutate into Black-ish shrieks. The bass-play is rich and varied.

But what makes them really interesting is the atmosphere, the melancolic views. The music all progresses very fluently: the tracks draw not-too-precise outlines, each repeating the other, echoing despondent feeling, carrying along deep and almost introverted emotions.

As I said, I’m following them since the start, and they only became better and better, darker, more personal and more moving; a dramatic voyage through misty landscapes where gleams a secret spirituality. If Revelations of Rain don’t shine in any way and won’t attract crowds of fans, it’s all the better; under the monochrome, lies its true complexity. You just have to give them time.

Russian Melodeath/Doom Metal quintet Otkroveniya Dozhdya return with their third bout of extreme metal, beyond mere fury comes the sensational vocals of Igor Yashin and his band of merry men contributing some of the strangest and eccentric compositions found to date in the doom/death vein. Evidently, the Moscow-based musicians combine the darkness and Pagan background of motherland Russia and encase it in thick, distorted guitars, very little vocal activity and instrumentation, finalising as one of Russia's most anticipated 2010 releases, a sure band for fans of Hecate Enthroned, Arkona and Frailty.

Emanation of Hatred is the third upcoming album that belongs to the Russian doom/death metal band, ”Revelations of Rain”. The album further develops ideas of the previous albums and prepares you right from the start (even through its very name actually, ”Emanation of Hatred”) for a tense, emotion/hate filled experience. Maybe the release of the album on the 13th wasn’t purely coincidental.

‘‘Emanation of Hatred” fully gives the impression of a very well made album, a very knotted one, to be precise, with heavy riffs that accompany you almost every single moment throughout, with the dark and slow rhythm of the drums that amplify this heavy atmosphere. The voice is exactly the way it’s supposed to be in a death/doom album.. low and heavy growls. As far as these passages spread throughout the album may be concerned, I can also place the album in the sphere of funeral doom, influences of this subgenre being very clear.

However, the album means far more than what I’ve previously mentioned. So many influences appear while you’re listening to every single track.. The rhythm breaks that appear in some certain places, with solos and fast drum beats underline in a strong manner the death metal part (it’s very noticeable in the track called ‘‘Time”, at 5:20 or so) and the long and melodic guitar solos protrude the melodic doom (a band that I’ve particularly thought of after listening these parts was The Prophecy(UK) ). A subtle black-ish influence is noticeable in the ”Antithesis of Life” at around 2:50 (a very fast drum rhythm, also, a high pitched voice).

”Emanation of Hatred” is not an album in which one may expect romanticism, melancholic states.. It would be ridiculous, rather, since the keyword of the album is ”Hatred”. It’s a harsh album, that produces a state of revolution and hatred against everything that’s surrounding you. To underline the quote from the Solitude-Prod description: ”Forget about violins, roses and romanticism: only gloom and hate fill this undoubted pearl of the genre”.

This would be one recommended album for the death/doom fans.. the ones that are familiar with and happen to listen to Mourning Beloveth, The Prophecy, Swallow the Sun, Evoken and early MDB will probably appreciate this album, as well.

“Emanations Of Hatred” is the third full length album of this dark Doom Metal band from Russia, and by far their most obscure release to date… The band delivers here a quite elaborate form of Doom/Death Metal with elements of Gothic and Funeral Doom Metal, where opaque and negative melodies created mostly by phantasmagoric lead guitar lines in communion with subtle and atmospheric keyboards, generate an intense, emotive and nightmarish atmosphere of desolation and suffering. The vocal work at this album is simply outstanding; deep visceral grunts, hateful Black Metal styled shrieks and some minor clean interludes become the perfect complement for the infernal and bleak music this album contains. Revelation Of Rain have never had a stable singer, the band’s previous two records featured different vocalists, and this album isn’t the exception, “Emanation Of Hatred” includes the vocal work of Vladimir Andreev (who has been replaced already as far as I know), who besides of delivering an incredibly powerful and infernal vocal work also seems to have influenced the whole composition style of the band, as I’ve mentioned already, this album is the most obscure, infernal and hellish opus of the band to the date and, in my humble opinion, the undisputable best of their three albums… Besides of the Gothic Doom/Death Metal elements we heard at the band preceding albums, this opus also features a strong and evil Black Metal vibe (which is perfectly reflected at the cover art), some straight up tempo Death Metal passages (ala My Dying Bride in its early releases) and, at the same time, majestic and disturbing atmospheric parts… With “Emanation Of Hatred” Revelation Of Rain have reached a quite unique style that make this album stands out from the average Doom Metal (related) releases. This album is not only recommended for those who enjoyed the band’s previous albums, but for everyone into the Dark Doom/Death Metal or Black/Doom Metal as well…

Nine years of existence, three full-length albums with this Russian band. Hm, this is nor little either many. Do you like listen to some doom/death metal which can be deep into your mind after and during listening to? I’m sure all the fans want such albums, aren’t you?? So I found such feelings on this CD… This is far not masterpiece, but made with really great moods. I like the whole album, as it’s fully filled with deepest doom metal thoughts like depression, devastation, solitude and despair… The music is totally negative, without any positive element and even without any little hope to survive, he-he… Totally soul screams so to say, looks like musicians are totally abandoned in this life and all things they need are just make last step into darkness… The atmosphere on this album is pure dark and obscure, deep and fucking pressing, with many-many scary moods. Yes, I know, previous albums of theirs didn’t impressed me such like this
one, and this is great, I see musicians developing and able to do great stuff. Thus if you do not afraid listen to really grim, slow, massive and grinding doom/death metal, and do not afraid to be doomed in insane asylum after listening to this critical mass – this is for
you. They will kill your mind by low tuned, vortex like, measured guitars and great obscure guitar solos, deep growls and deeply dark atmosphere. Not romantic, without violins, but just dark as hell and hateful! For fans of early EVOKEN! Seven tracks, and booklet with little wrong (maybe it was planned, I do not know) – four first and last pages comes twice.
Solitude Productions 25.04.2011, 17:14
Prev
1 2 3 4
Next
Write a review