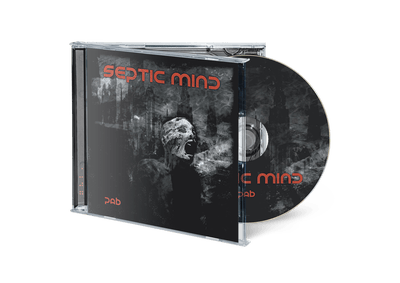 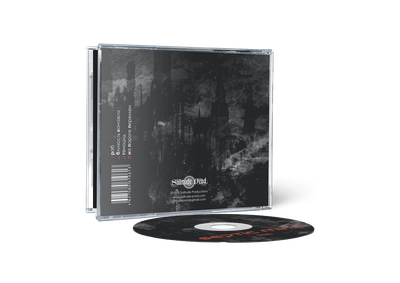 The third full-length album by a Russian band continues to study the problems of insanity of modern society and apocalyptic expectations which were embodied both in the general mood of the album and its lyrics, as well as in in its musical part: tempo variations, passages from meditation to fury, from canonic funeral doom metal to avantgarde psychedelic experiments. And again Septic Mind amazes the fans of heavy, dark and nonstandard music.

During the years “Solitude Productions” has become quite the prolific Doom Metal oriented label, picking less known acts form all over the world. This time they did not stray very far from their home and present a local duo namely Septic Mind (whom “Solitude Productions” took under their wing from day one). “Раб” (Slave) is the band’s third full-length album. Firstly, the cover of the CD is a little bit deceiving, looking something like an Industrial Metal act would do visually, but on the other it is probably just a matter of the listener’s perspective. The content is delivered as four lengthy songs. And the Doom they play one could call slightly experimental, adding not only Death or Black Metal moments, but also subtle psychedelic passages, when the music flows in an almost relaxed manner. “Раб” is clearly of the progressive nature. The influence of UK’s Esoteric is felt evidently throughout the record, though Septic Mind comes up with simpler compositional arrangements and less transcendental depth, even the vocals sound very alike to those of Greg Chandler. Still, the Russians do their work with confidence and heart, yet not overworking or making it too complicated. Also, just like their label mates Откровения Дождя, the lyrics of Septic Mind are sung in Russian. This is a bold, but also respectful move, that even though regarding the popular opinion might reduce the chances of wider recognition, it does keep the band’s identity intact.
All in all, this album is not overly dark or moody, but somewhat cold, even seemingly a bit apathetic at times, yet sufficiently atmospheric, and this is what counts in this type of music.

Septic Mind have always been experimentalists. Their first two albums were both quite different from each other, but shared some characteristic trademarks and were, above all, challenging and fresh. At some point after the release of The True Call in 2011, the Russian duo announced that they had split up, but last year, they suddenly reappeared with a new album, Раб. Fortunately for us, they have decided to continue on their dark path, and it is leading them further and further away from their point of departure.

Again, the music has evolved considerably. In comparison to the predecessor, the difference is so striking that it almost feels like listening to an entirely new band. The almost futuristic cover artwork and font give a first indication of the new direction, for indeed, a slight Industrial touch has sneaked into the sound. The opening title track surprises listeners with programmed synthesizer sequences which are very unusual in Metal, and the drums, apparently also programmed, have a modern, slightly mechanical feel to them. This becomes most conspicuous in the faster sections, especially in an intense outburst in the second track which features extreme screamed vocals in the vein of Esoteric (part of what remains of Septic Mind’s roots).

But there is a considerable amount of organic and atmospheric elements, too. Most notably, the band’s trademark lead guitars, often played with a wah effect, are much more melodic and immediate now, sometimes even using oriental scales. Then, there is a long, excellent acoustic guitar solo on top of a repetitive riff in the opener and a similarly playful (albeit programmed) piano solo in “Геноцид”, both of which sound fresh and interesting, but at the same time surprisingly pleasant.

The last point is, perhaps, the most unexpected development: compared to the band’s extreme earlier material, Раб almost seems like a walk in the park. It is fairly accessible for the most part, sometimes even catchy. The atmosphere is less abysmal and the arrangements are less hypnotic than before, but to shock fans completely, a brief faster section in the last track is actually in a major key! If all of this still isn’t enough to convince you that this album is a step into a new direction, let me add that it is generally faster, much more dynamic, more clearly structured into separate sections, more focused on riffs and rhythmic patterns, less abstract and psychedelic… Need I go on? Nevertheless, however, the powerful vocals, meandering lead guitars and overall experimental feel tie this album in with the band’s discography. The closing track bears the strongest similarity to earlier material and is a highlight altogether, not least due to the superbly emotional riff kicking in just before the four-minute mark.

On purely compositional grounds, however, the new Septic Mind is not a perfect album. Some riffs are somewhat unspectacular and, at times, a bit dragging, especially in the case of “Геноцид”. With all of the above-mentioned changes, it is also natural that the atmosphere is not as consistently doomy as before, which may disappoint some fans, but is not a bad thing as such – more relevant is that the atmosphere is not entirely gripping throughout. But those are minor flaws on an otherwise highly interesting and well-conceived release. Most importantly, though, Раб managed to surprise me more than once, and for that it deserves extra credit. For, in Doom, surprises are scarce these days.