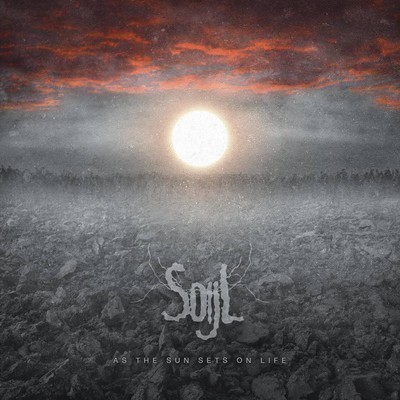 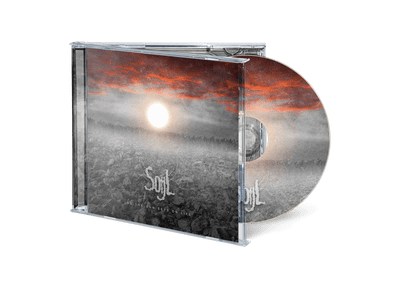 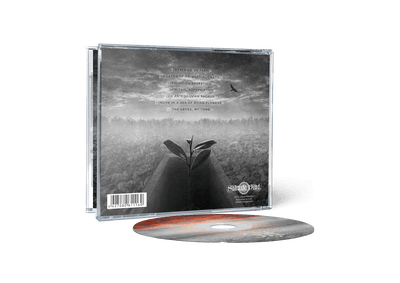 The second album by Soijl, a project founded by the Swedish multi-instrumentalist Matthias Svensson (Saturnus, Istapp, Vanmakt, Nidrike). Continuing the development of figurative ideas and the musical component of the debut work, "As The Sun Sets On Life", at the same time, is a new stage for the band. Gloomy, atmospheric doom death metal compositions with a dense sound and excellent performance are what Soijl is loved for, and this is exactly what the musicians offer in their new work, in a more spectacular form this time. The famous designer and photographer Roman Kamin (Wine From Tears, Mare Infinitum, Aut Mori) have been again responsible for the visual part of the album crafting a magnificent 12-page booklet.

Tracklist:
1 Death Do Us Part
2 Weapon Of Primordial Chaos
3 Salvation Deception
4 Spiritual Asphyxiation
5 On Antediluvian Shores
6 Alive In A Sea Of Dying Flowers
7 The Abyss, My Tomb

Soijl are a band from Sweden that has been featured before in this zine and plays a melodic mixture of doom and death metal and this is a review of their 2017 album “As The Sun Sets On Life” which was released by Solitude Productions.

Melodic guitar leads start off the album along with some drum beats and spoken word parts a few seconds later and after awhile the music gets a lot more heavier along with some death metal growls while you can also hear a great amount of melody in the guitar riffing that is heavily influenced by the 90’s.

When s creams are utilized they add in a touch of black metal while most of the tracks are very long and epic in length and when guitar solos and leads are utilized they are done in a very dark and melodic fashion along with clean guitars also being added into certain sections of the recording,

Female vocals can also be heard briefly while some tracks also add in atmospheric synths as well as a brief use of whispers and spoken word parts on a couple of the songs and all of the music sticks to a very slow musical direction and you can also hear all of the musical instruments that are present on the recording.

Soijl creates another recording that remains true to the melodic mixture of doom and death metal from previous releases, the production sounds very professional while the lyrics cover death, doom, hate and misery themes.

In my opinion this is another great sounding recording from Soijl and if you are a fan off melodic doom/death metal, you should check out this album. RECOMMENDED TRACKS INCLUDE “Death Do Us Apart” “Spiritual Asphyxiation” and “The Abyss, My Tomb”.

Beginning life as an informal solo project started around 2008 by multi-instrumentalist Mattias Svensson, already a veteran of several lesser-known Black/Death/Thrash bands, Soijl didn’t become a serious venture, or an official band, until 2014. By then, Svensson had spent a couple of years with Saturnus, before teaming up with fellow ex-Nidrike bandmember Henrik Kindvall on vocals. Later, post-debut, Johan Mathisson, from Onda Makter, arrived as full-time drummer. On paper, that should make Soijl about 90% Black Metal, but Svensson is on record as having always wanted to play Doom, but never – Saturnus aside – having the opportunity or personnel to do so.

So, the debut, ‘Endless Elysian Fields’, arrived in 2015, courtesy of Solitude, with a Death/Doom tag and to a fair quantity of critical praise. Sticking with the same line-up and label, sophomore follow-up ‘As The Sun Sets On Life’ will see official release tomorrow, in a rather stylish-looking limited digipak presentation.

On the one hand, it should certainly please those who enjoyed the debut’s combination of muscular and dynamic guitar-driven melodies and diverse vocals – it’s actually quite hard to separate the two albums, even played back to back. Each one comprises seven tracks, mainly in the 7-9 minute bracket, running for around an hour, but unless you’re keeping count, you probably won’t notice the playlist click over to the new release. That, though, is less of a criticism than a reflection of how right Soijl got ‘Endless Elysian Fields’ – without radically changing compositional style, they didn’t leave themselves much headroom for evolving and refining a different sound.

Occupying the same sort of clear yet hefty soundstage, with the same distinct, precise mix and balance to the instrumentation, ‘As The Sun Sets On Life’ rumbles along exactly as you might anticipate: guitar lines merge and duel through riffs and expansive melodies, backed by solid unfussy percussion that can amp up the thunder when it needs to, allowing space for the expressive and varied vocals to sweep from spoken to clean to growl. Very occasionally, as on the closing of ‘Death Do Us Part’, extra features appear: ethereal female voice, in that instance, but there are other snatches of keyboards scattered throughout.

It is, to be honest, a not unfamiliar path: in timbre, variety and range, both Henrik’s voice and Mattias’s guitar are reminiscent of Messrs Jacobsson and Ericson of compatriots Draconian, as are the morose and heavily narrative lyrics – though they all also have hints of a less symphonic When Nothing Remains. Less so, but nonetheless present, are moments nodding towards older My Dying Bride and, perhaps inevitably, Saturnus’ ‘Saturn In Ascension’. Where Soijl most markedly differ from those other bands is in the limited use of keys or any other instruments, and the slightly more Metal-oriented guitar interjections, including a fondness for squealing pinch harmonics: but, nonetheless, to me, it falls very solidly into the old-school Gothic/Doom camp, lacking only some of the more theatrical and orchestral flourishes found in some strands of that genre. Mood and atmosphere-wise, it certainly sits right alongside the aforementioned, and while not totally individual in approach, yet carries sufficient personality of its own.

Perhaps more importantly, it can hold its head pretty high amongst such exalted company. It may not hold many surprises, but it doesn’t really need to in order to resonate with the listener: working to a well-defined classic template is fine, in my book, if you have the compositional strength and musical firepower to do a proper job of it, and Soijl do exactly that. So, if you’re a fan of that moody, mid-tempo, graveyard soul-searching sort of exposition, delivered with the typically slick melodiousness and polish of Gothenburg and beyond, here’s another worthy example to add to your collection.

Sometimes, there are albums that seem to be complex to our senses, and if you’re a writer, it becomes a hard labor like those that Heracles faced in Greek mythology. But as well, the more an album is complex, the more you’ll like it, and this is the case of the Swedish trio SOIJL. Their new album, “As the Sun Sets on Life” is really very good. Their musical work is focused on a very melodic and melancholic form of Doom Metal using grunted voices and some experimental touches and influences. Obviously it is bitter and harsh in many moments, but the more you get used to their musical work, the more you’ll understand and your senses becomes opened for what the band has to offer. You’ll hear a bitter and oppressive form of music, but elegant and with some good female vocals as well (a courtesy of Miriam Karlsson).

Mattias Svensson is the album’s producer. Initially, the band was planned to be a side project of Mattias, so he knows and have the clear idea of what he wants of the sound quality. It’s not perfect, because it is a bit rawer than the needed, but it is heavy and has that balance between weight, aggressiveness and clarity in a very good level. The seven long songs of “As the Sun Sets on Life” are very good, but as their finest moments, I’d like to name the bitter and darkened “Death Do Us Part” with its deep introspective feeling and fine guitar work, the funeral paced song “Salvation, Deception”, the contrast between nasty vocals and good clean voices on the depressive slowness of “Spiritual Asphyxiation”, the keyboards that fill all the empty spaces on “On Antediluvian Shores”, and some aggressive parts, and the contrast of clean and shrieked vocals presented on “Alive in a Sea of Dying Flowers”.

It’s an album hard to be assimilated, I’ll not lie. But “As the Sun Sets on Life” is really very good, and SOIJL is a good name in the Doom/Death Metal scene.

The mournful and melodic Swedish death/doom band Soijl is back with their second album.
As mentioned in connection with Endless Elysian Fields, the debut released in the fall of 2015, the band was created in 2008 by Mattias Svensson, while Henrik Kindvall became part of the band the year before the debut. During the 20 months that have passed, drummer Malphas (Onda Makter) has also joined the band.
A lot is unchanged, and if you appreciated the debut, you’ll presumably like this one too.

The style has not changed. The band performs heavy and grief-stricken death/doom with ditto growling, and the two albums sound quite similar, i.e. loud and clear, but heavy, deep and resounding. The new record is a few minutes longer than its predecessor, but both contain seven songs that together clock in at about the hour. As with the debut, I get some associations to My Dying Bride, albeit without the similarity becoming too apparent.

Despite heavy riffs, the music has a hovering atmospheric ethos. Wistful melodies give the music wings. But gliding flight and majestic vistas give no comfort. The golden eagle’s brave tears fall on a lush landscape that slowly fades away, consumed, poisoned and deteriorated by the greedy two-legged breed, which in unquenchable desire unceasingly increases its territory.

Every single song has strong melodies, but I miss a proper heavy-duty riff or melody or two, that would truly stick as cattle branding. Endless Elysian Fields had the killer-song Dying Kinship. As The Sun Sets On Life “only” has seven equally good songs, soaked in lead and melancholy. For fans of death/doom that should nevertheless be enough.
Solitude Productions 11.09.2018, 15:45
Review
Wonderbox Metal
13.06.2017

Soijl are a Swedish death/doom metal band and this is their second album.

The songs are either slow and substantial, or mid-paced and rumbling, moving unstoppably forward, bathed in misery, despair, and negativity. This is death/doom with an old-school doom metal emphasis and giant, roaring growls.

Subtle keyboards are used sparingly, merely to enhance the already gloomy moods that pervade the release. These add extra texture to the melodic leads and meaty rhythm guitars. Female vocals appear too, for much the same reason.

The winding guitar melodies that are a calling card of atmospheric death/doom are seemingly omnipresent, weaving their dark magic as the songs progress. Well-written and effectively judged, these tracks build atmosphere with ease and emphasise the lost, hopelessness of all of life’s endeavours.

The main growls are extremely satisfying and sound monstrous in their delivery. Occasional screams are unleashed too, but it’s the growls that are the real stars of the show for me.

With a clear, professional recording, this is an album that has a lot of strengths and very few weaknesses.

As far as death/doom goes this is up there with the best of them. As the Sun Sets on Life is a very accomplished album and you should check it out.