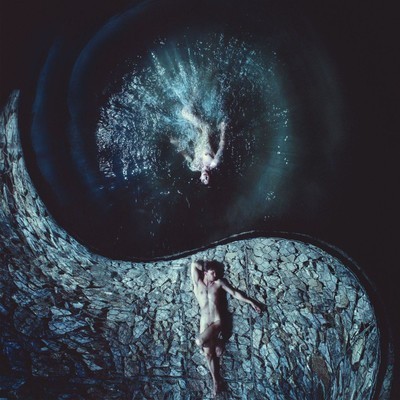 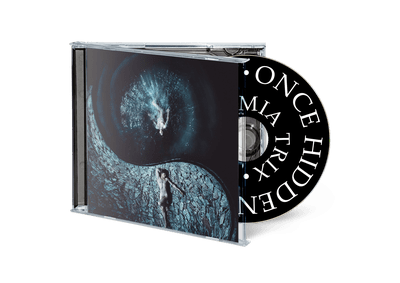 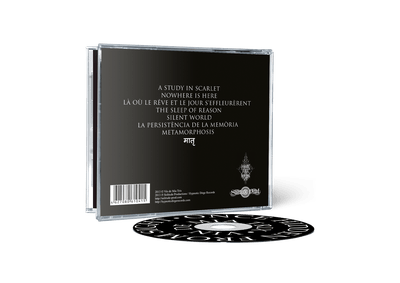 The full-length album from Ukranian band Vin De Mia Trix which showed its potential through numerous gigs and self-released demo and mini-album, and gained interest from fans of dark music. Vin De Mia Trix are in artistic search for their own sound based on traditions of atmospheric doom death metal with introduction of funeral doom and dark metal, classical music and Eastern philosophy. Within «Once Hidden From Sight» every fan of dark music will find something for the soul!

This album is a co-operation, joint venture of sorts or a co-production if you will, between Canadian Hypnotic Dirge Records and Russian Solitude Productions, whereas the band Vin de Mia Trix originates from The Ukraine, and from whom _Once Hidden From Sight_ is a first full-length recording.
The band mixes a plethora of lyrical themes and languages, from English to French to Sanskrit, apparently bearing some spiritual / philosophical esoteric agenda of sorts; the lyrics are thoughtful, thought-provoking and show a heightened mastery of the English language. The album spans over an hour's worth of music, and like the Yin and Yang insinuating cover art, the music captured in this album is pretty much the very same thing: briefly heavy and robust, and suddenly maneuvres itself in 180 degrees, transfiguring into being totally neoclassical and laid-back in essence.

It opens with engaging high-pitched, tremolo-heavy repetitive riffage and a certain guitar tone that could have been a take on My Dying Bride's "Sear Me MCMXCIII " (from the _Turn Loose the Swans_ album), but then, after a minute or so, it goes separate ways, delivering a sort of unorthodox doom/death metal involving some clear, deep and occasionally somewhat tortured baritone-like singing and a couple of piano interludes. However, the My Dying Bride signature is ever present, hovering like a ghost above the atmosphere and the riffs.

Vin de Mia Trix are capable musicians, bearing a somewhat individualistic, if not singular, message to the doom-tinged death metal niche; by no means are they the heralds of an aesthetic revolution, but they most certainly bring something fresh to the table.

The songwriting is intelligent and the instruments are well handled; the musical / classical academic education of at least some of the group is well pronounced and conveyed throughout the recording.

High-pitched introductions and suspense-building melodies usually meet every metallic track, and both song openings and the body of each song excel in highlighting some complex rhythms and intricate drum work, as well as a very dominant bass guitar that pushes the plodding openers to the edge of their contemplative tranquillity and down into the turmoil of the heavier death metal moments -- a free fall of brutality versus finesse.

Some of the riffs are extremely potent, as well as the growling vocals, however as soon as the pace picks up, the band decide to screw with the dynamics and offer sort of an intra-ballad within each song and in a way ruin the expressive powers of good old brutality and dense atmosphere, as soon as they dawn upon the listener.

It seems as if the song openings and the clear-sung lamented intermissions from the general metallic sound get to be highlighted more than the actual metal ingredient, what ultimately results in a recording with very strange dynamic attributes and a sense that the band go to lengths in order to show off their classical education and musical knowledge at the cost of losing the momentum and power they worked so hard to engineer.

When the album finishes, the listener is left with a question mark about the happenings within the recording, whether it was a metal album one was listening to or maybe a neoclassical piece with some distorted guitars thrown in.

Although the aforementioned My Dying Bride influence is all over the place, Vin de Mia Trix don't incorporate the more laid-back, non-metallic parts as seamlessly well into their death metal as My Dying Bride did on their early recordings and unlike the former, Vin de Mia Trix's music hence sounds a tad disjointed and less intense or dark.

Nevertheless, _Once Hidden From Sight_ is a well-rounded, highly professional and interesting an album whose qualities abound, showcasing a super intelligent group of musicians who might have been too ambitious and too pretentious for their own good, in their effort to prove something to someone; it's an eclectic recording with many positive points, mainly in the songwriting department as well as in its sophistication factor, but unfortunately it also suffers from the band's undying ability to nip every good metallic riff in the bud when they see one.

_Once Hidden From Sight_ is thinking man's doom-oriented death metal with an added value and an intellectual edge, most suitable for fans of My Dying Bride with a twist, but neither as metallic nor monolithic as the latter; My Dying Bride lite, anyone?

weightless. A sound that can snuff out all the brightness around you in the blink of an eye, but just as easily carry the most fragile, translucent guitar cries over great distances. The sound of bands like Asunder or Mournful Congregation, and more than once I was reminded of the latter, especially on the excellent "Nowhere is Here" and "The Sleep of Reason", which develop a similar instinct for achieving a good balance of patient structures and subtle twists motioning a song onwards. While Once Hidden from Sight behaves in places like funeral doom, I'd rather call it dark brooding music with cleverly inlaid elements of more "energetic" songwriting. The band earns additional sympathy for often using unforeseen notes that take the melodies on unexpected tracks, or rather make the listener discover new layers of melodies that end up working neatly most of the time. One thing that could use some training is the clean solemn voice, which is not quite as convincing as the effect-heavy growls, but I wouldn't define it as a turn-off either, especially seeing as vocals are used sparingly on the whole - a good point. The first interlude - the French one - is a great piano composition that feels like a slow walk along the empty corridors of some haunted mansion, every louder hammering of a key making your head turn left and right in anticipation of something scary. The Spanish interlude is where things start to take a turn in a not so good direction. After a promising first minute, that track gets bogged down in expressionless minimalism lasting for five long minutes. The song that follows, "Metamorphosis", is so bad in every conceivable way that I'd rather abstain from asking "why?"... It feels like a song patched together with a random generator, complete with poor chugging patterns, directionless vocals and a solo guitar part around the six-minute mark that made me pull my hair out in frustration. The closing track, "Mat?" (which apparently means "Mother" in Sanskrit, confirming that the guys have a thing for languages), is only slightly less annoying. The foundation is good, in the vein of the album's first two thirds, but these insipid guitar licks appearing out of the blue and a generally confused scenario make a chore out of sitting through the nine minutes... In the end, that's nearly one third of the album we're talking about, enough to "ruin the picture", like I said above. But another, more general issue these two tracks create is that they are basically an "amplification" of the little friable spots and inexperience-related errors found in the other tracks, so that these tend to pop out more on subsequent listens. Which is of course not fair, but it's all part of the game! And I'm pretty sure Vin de Mia Trix themselves will come to a similar conclusion and know what to keep refining and what to gum out in the future. So no diamond for now, but a rising force to be reckoned with, and doesn't that count for something already?

"Once Hidden From Sight" is the first full-length of these Ukrainian doomsters. This album offers more than an hour of atmospheric death / doom, which irresistibly reminds of My Dying Bride and Mourning Beloveth. The album is opened by a nine minute composition “A Study In Scarlet “ which starts with a guitar, almost identical to the one in “The Cry of Mankind”. Even the remainder of the song is based on the riff similar to the one in “The Angel and The Dark River” album, from the mentioned legends. The album moves more or less in the same direction, and there is nothing more to add to that. On this disc there is simply no originality. The production is also like on the mentioned album, except the vocals being much worse. Not to bad for a debut, but lacking a great dose of originality.
Solitude Productions 27.12.2013, 02:21
Review
Brutalism
3/5
21.12.2013

Doom/death from the Ukraine who have been active since 2007 and this is their first full length album. This hits all the markers of almost funeral doom, however there are the usual tried and tested clean and instrumental sections that would remedy them following in the footpath of many bands from their region and beyond into Russia. The sound of the guitars is a little muddy and ‘A Study In Scarlet’ has something weird happening beyond the six minute mark (and the tracks nowhere near done yet ) with some pinch harmonics and groove, some chunky bass lines, it all sounds a bit out of place, but doesn’t if you get my meaning. By this I refer to the doom laden backbone that ultimately keeps the band from verging into potential follies of other genres.

The piano driven ‘Là où le rêve et le jour s’effleurèrent’, roughly ‘where dream and day unite or brush’, is not really fitting for me, it’s really dull, put it does break up the often expected dirge of the previous two encounters on this release. The band don’t need place or space fillers, there is enough on the vocal inclusive tracks. So moving onto ‘The Sleep of Reason’, the UK trip of doom death will serve as a major influence, haunting guitar riff, soulful acoustic chords and distortion driven chords and echoing dreaming atmospherics with some real dank death vocals and a few harmonics. It fits with the genre, but follows the blueprints to the letter and I and starting to wain my attention by now. Although the much more heavier ‘Metamorphosis’ has more balls than any other track on the album and stands out more for me, it’s more epic, more death, more inclusive for the listener, certainly for me as it possess some groove you can nod your head too, a cool solo and back bone that’s more fitting to listen too in others company rather than the isolating nature of the previous album tracks.

This is rather a long release that fits with all of the stigmas and levels of musicianship you would come to expect from such a release in this genre. There are random variations, but I do wonder if some of the tracks could be that little shorter in duration, it wouldn’t work live for me, but in a dark room with some candles and personal solitude, you would most probably get this release overall.