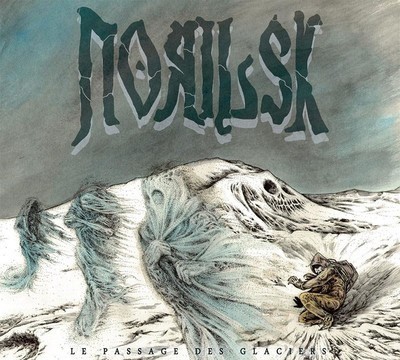 French-Canadian band Norilsk is back with a captivating new album, as thick and heavy as permafrost. Le passage des glaciers (The Passage of Glaciers) follows in the footsteps of 2015's album The Idea of North, but expands the sound considerably. From a sludgy slab of doom-death, the band has carved further into the icy influences of dark metal, to emerge with a blackened doom-death album tainted with frozen melodies, misty atmospheres, and reflective lyrical passages. As lyricist Nic Miquelon mentions, “Anyone who has followed us so far and enjoyed our musical landscape might be carried away into the distance with Le passage des glaciers. There is something of a personal journey in there, something that had to be experienced and mourned, and something that swallowed us whole when creating this.” While Le passage des glaciers is not a concept album, this new musical chapter has been written around the theme of mourning and departure. The artwork is signed by Sam Ford, who designed the artwork for the previous album The Idea of North. Sam worked closely with the band to develop an artistic continuity, yet a distinct visual atmosphere to the album, and integrating symbolism and referencing Canadian art. Death, like a magnetic North, is calling, and many are those who answer. It hypnotizes with its lullaby, carrying some into the distance, and leaving the others behind ...in the furrow left by the passing of glaciers. The album includes eight tracks, mostly in French, for a total duration of 44 minutes. 4 Panel Digipack