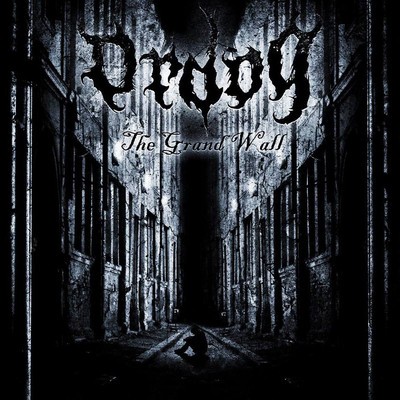 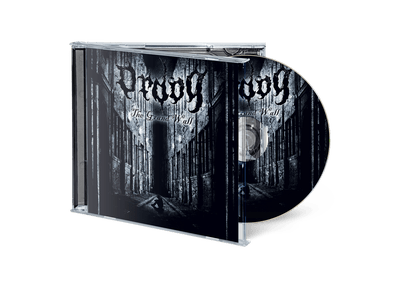 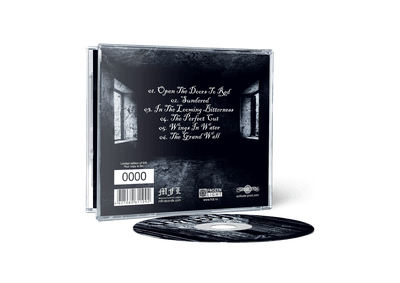 Finnish masters of doom death metal are back with their fifth album «The Grand Wall». This album is more aggressive compared to the previous ones, but melancholy still presents and goes hand in hand with aggression. The lyrics move more between philosophical aspects, introspection and how people react to sudden loss in life. There’s a grand wall standing on your way. Co-release with Moscow Funeral League and Frozen Light. Limited to 500 copies.

Lapland is a part of the world strongly associated with this, the darkest time of the year. Ordog, hailing from Tornio in Lapland, have darker business in mind than festive cheer, however. They return on 21st November with a slab of finely crafted Death-Doom that they hope will provide a heavier, more melancholy alternative to those Doomsters already tiring of the annual overdose of musical atrocities we’re forced to endure when venturing into public places.

‘The Grand Wall’ is dark and it’s heavy, that much is clear from the outset. A deceptively mellow introduction to opener, ‘The Doors to Red’ quickly morphs from a clean, arpeggiated riff into a lumbering Doom colossus. Dramatic Gothic keyboard effects add atmosphere to the thumping Doom riff and growled vocals, while the brief mellow interludes in the song serve to heighten the crushing Death-Doom aggression. It’s a statement of intent from Ordog that foretells the heavy journey ahead as the album progresses. After this promising start, things just get better and better. The mighty ‘Sundered’ is, frankly, a Doomtastic masterclass in malevolent, Trad Doom, and features this reviewer’s riff of 2016; a bluesy, sludgy, slowed down beast of a riff that will move the most stationary of heads to bang like a privy door in a howling November storm.

Musically, ‘The Grand Wall’ is an incredibly accomplished piece of work; Ordog have been plying their trade since 2005, ‘The Grand Wall’ being their fifth full length album, and it really shows. Ordog are a band at the top of their game. Every performance on this album is assured and devastatingly effective, demonstrating an impressive range. In addition to the skilfully executed Doom, there are elements of fearsome Death Metal, Funeral Doom and some subtle Gothic flourishes that add further depth to Ordog’s sound.

The superbly titled ‘In the Looming Bitterness’ at the midway point of the album provides its fastest, most visceral burst of Death-Doom bile; a savage, pounding monstrosity, driven by a remorselessly heavy riff and some throat-rippingly guttural vocals, before ‘The Perfect Cut’ delivers a more patient, atmospheric build up until unleashing an irresistible palm-muted riff and a powerful, lengthy solo that is probably the finest on the album.

Title track, ‘The Grand Wall’ clocks in at just under 11 minutes and brings the album to a suitably epic conclusion. A brooding, malevolent bassline, mournful backing vocals and Gothic keyboard effects add a touch of 80s Darkwave before the Doom is cranked up to the maximum with singer Aleksi Martikainen’s withering growl and another monstrous riff, before a change of pace as the last passage of the album fades with a melancholy dirge of Funeral Doom. It provides a fine end to a fine album, drawing together all the elements that worked so well throughout ‘The Grand Wall’ and combining them in one atmospheric finale. Ordog have delivered a Death-Doom treat that any Doom-metal.com reader would love to find in their Christmas stocking.

Finnish band Ordog is on stage for more than 10 years, and during that time managed to release several demos, compilation of the best songs, and five full-length albums. And today we’ll be talking ‘bout their newest CD called “The Grand Wall”.
Album greets us with pleasant acoustic arpeggios then being replaced by a powerful heavy verse, adjusting the listener to the desired mode. Also in this song apart from the strong growls can be heard a bit of clean pensive vocals. “Open the Door by Red” is an excellent choice for the album’s opener. The second tune is forceful “Sundered”. It rolls after listener like a massive tank, this composition is based on crunchy riff, tight bass parts, and double-bass drumming. Powerful song with an unexpected solo in the blues scale. Also the interlude of the track is quite interesting, one can hear very Swedish-like MDM keyboards part. I believe that fragment would totally fit in one of the In Flames songs. By the way, the sound of the band is not typical for the Finns. If I did not know their country of origin, I would have thought it was the Germans. The next two songs passed, did not impress me. Even got bored a bit with them. But the penultimate song – “Wings in Water” made me cheer up again. Excellent energetic, aggressive composition with a classy tense main riff and vocal variety. Without a doubt – the best song on the album! Final title song, which lasts for almost 11 minutes – is the quintessence of Ordog style and the most doomy tune on ”The Grand Wall”. It absorbed all that is in the arsenal of the Finns: pressing heavy guitar chords, gloomy atmosphere, powerful vocals, nice melodies, acoustic passages. And the finale is dignified.

Verdict: pretty masterful album from a good band. Let’s see what will happen next.

I’ve been to the Great Wall, and it was pretty great. 10/10, would wall again. I still haven’t seen The Great Wall, but it looks like Zhang Yimou lost his eye for imperial extravagance and tragic heroism in unexpected places beneath layers of overextensive eye-catching and Western-style explosion saturation. The Grand Wall sits somewhere between those two. Probably. I’ll update you when I’ve seen The Great Wall.

Ordog exists somewhere on the convergence of death doom, funeral doom, and regular doom, which draws the band into competition with itself over committing fully to any one direction. The Grand Wall, like older Ordog, can be funeral doom minimalist, but it isn’t quite funeral doom slow, nor is it funeral doom atmospheric; it doesn’t work up to death doom complexity and usually stops just shy of epic doom grandiloquence. I have lamented on every Ordog release that their music never feels expansive enough. The songs are often ponderous and melancholy enough that I want to be drawn into something vast, but the sound is too thin for me to completely submerge myself; at the same time, the song structures lend themselves far more to immersive contemplation than active participation, leaving the listener in something of a no man’s land.

The Grand Wall suffers from this same problem, but is better at taking the initiative in engaging the listener; the album definitely drags in places, and I can only wish that the band had some thicker production, but in that department, the album is at least a step up from previous years. It comes at the expense of some of the atmosphere that their first few albums did manage to achieve quiet well, but this musical evolution is not a zero-sum game, and for its missteps, The Grand Wall does succeed in more areas.

The up-tempo “Wings In Water” is easily the best track on The Grand Wall; after the grim hesitation of the previous tracks, whether warranted or not, “Wings In Water” feels packed with vitality and higher-quality melody lines. All Ordog really needs is more layers; more keys, especially, but a few extra crunchy guitars would go a long way in bulking up these riffs and giving them the power they need to last. The piano, organ, and synths that are present on The Grand Wall shape a mysterious, gothic-style atmosphere around the simplistic riffs, and when they’re paired with strings as in “Open The Doors To Red” or “The Perfect Cut,” Ordog swells with a convincing expression of magnitude.

For me, the album’s other highlight is “Sundered,” which ekes out a sludgy, murky grunt of an existence before transitioning into a crushing love letter to early Amorphis. The 11-minute title track, closing out the album, also offers a taste of something very different, aiming for somber reflection over gurgly chugging. By prizing atmosphere over songwriting, with restrained clean vocals and quiescent melody, the song achieves the sense of doom that Ordog has been striking at all this time. The mood doesn’t quite survive the transition into full-blast death doom, but “The Grand Wall” remains a powerful piece and the one most suited to closing out the album.

The Pretty Good Wall may not achieve the level of magnificence its title aspires to, but it belongs to a distinctly Finnish tradition of melancholic doom and likely won’t disappoint the adherents of this scene.

Here we have the fifth full-length ‘The Great Wall’ by the gents of Ordog. An exponent of the Finnish doom metal scene. Starting out quite promising Ordog lost its momentum after their second album ‘Life Is Too Short For Learning To Live’. Slowly but inevitably they shed away their unique trait in favour of a more tried and true formulaic approach. Sadly they simply don’t excel in this style. So what about this ‘The Grand Wall’? Let me be clear: Ordog is not a bad band at all and this album is ample proof of their talent. The songs are heavy and massive, the melodies (sadly underused again) are quite stylish and the general atmosphere is quite decent. However, the songs tend to have too little contrasts and the contrast that are there often feel a bit misplaced. The addition of synths feels somewhat forced while the vocals are pretty standard for doom/death. Ordog seems unable to forge a unity from the individual elements they use as such the album lacks impact.