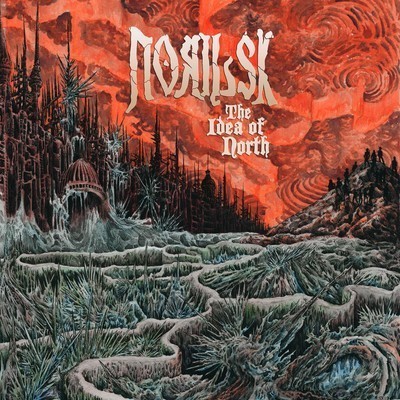 Named after Siberia’s northernmost city, home of a famous heavy metal smelting complex, Norilsk is a doom-death band from Gatineau (Québec), Canada. After releasing an EP, Japetus, in July 2014, Norilsk now unveils their debut album - “The Idea of North” in a glorious digipack edition on Hypnotic Dirge Records. “The Idea of North” is a doom-death album crafted for the winter season: it has slow and crushing riffs, death growls, and atmospheric arrangements. An evocation of an ominous presence over a vast wasteland, “The Idea of North” is a massive offering that triggers the imagination. Its music draws comparison with doom-death bands such as My Dying Bride, Morgion and Ablaze in Hatred, but it also has a few atmospheric sludge/post metal elements reminiscent of Isis and Morne. Inspired by the multi-faceted Canadian experience of the North, and assembled into a cold yet dynamic sequence of eight individual songs, the album explores themes of darkness, isolation, identity, archaism and persistence—thus delivering a fresh perspective over the cliché Nordic imagery in metal in general. “The Idea of North” was recorded at Studio En-Phase in Montreal by Jean-Philippe Latour (Paroxysm, Fuck the Facts, Talamyus), and mixed at Pebble Studios in Ottawa by Mike Bond (Dissentient, Endemise, Loviatar, Signs of Chaos), while the artwork was designed by professional artist Sam Ford, who also designed album artworks for Black Cobra, Witch Mountain and Monarch, among others.