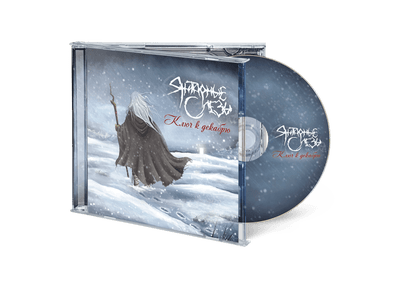 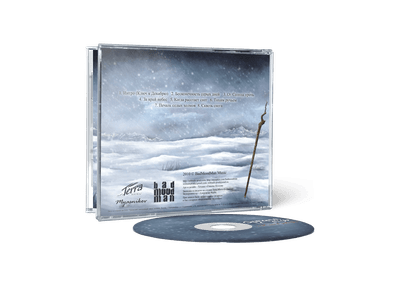 The long-awaited second album of the most famous Russian pagan/doom metal band Amber Tears being one of the best representatives of Russian pagan scene. Having started their way as followers of the cult Belorussian band Gods Tower Amber Tears demonstrate their own unique face at the second album “A Key for December”. Basing on folk motives and lyrics featuring folk tradition the musicians added doom death metal elements with all their slowness and weight to their music. The Russian traditional musical instrument gusli appearing on the album underlines the mental connection of Amber Tears work with traditional Russian music which is organically fused with modern melodic doom metal features. This album is indeed a milestone!

From Russia with despair...

First and foremost, I have to admit that after the intro (which finds itself filled with background voices smothered in ambience and atmospheric keyboards) slipped past to begin this album, I had momentarily thought that I may have accidentally put on one of my Draconian albums instead of the Amber Tears album I was supposed to be listening to. As it turns out, I was incorrect... but all in the same, it wasn't a far fetched moment of confusion.

Now, before I go any further, I have to say that I'm not in any way trying to put this band down. Although in a very similar Gothic Death Doom vein to Draconian, they still hold their own quite well and not every track is the same formulaic process as the last, which can often be seen in the aforementioned sub-genre. Plus, unlike Draconian, Amber Tears do not have female vocals here, which I think helps the album flow better (I, myself, have no problem with female vocals, but I never cared much for them in the Gothic Doom albums that I've heard).

One unique thing that my ears picked up (and also judging by other people's thoughts, I'm not alone here) is that, from time to time, the guitar tone is almost identical to the sound of bagpipes. I'm not sure how everyone will take that, but I think it sounds awesome and definitely adds a slightly different level to the music they're putting forth.

As far the as the album as a whole goes, you do have a good, healthy dose of melancholy-filled lead guitar parts (they come off as having a very depressing aura and being despair-driven, as it's often the case with this style of music) over atmospheric keyboard sections and steady drum patterns (the drumwork, in fact, albeit competent, doesn't really deviate much from merely setting the pace of the tracks. There aren't any real interesting patterns or fills minus a few small moments, but that too isn't all too common in this style. I will say that, while it doesn't really further enhance the band's sound, it doesn't take away from it either), with the occasional use of acoustic guitar sections and a mixture of growled and clean (which are sometimes almost in a spoken fashion) vocals. The sixth and final tracks on the album ('Тихим ручьем - Like a Silent Stream', 'Печаль серых холмов - Gray Hill's Sadness' and 'Сквозь снега - Through the Snows') have a very folk-ish, Agalloch feel to them, which I find to be fantastic sounding. At times, though, it doesn't help that I don't speak even the slightest bit of Russian, so the vocals from a lyrical standpoint mean absolutely nothing to me, unless I were to look up the translation somewhere. Even with that distance between me and the intimacy of the lyrical work, I really enjoy Anton's clean vocal work (And find that his death growls occasionally remind me of the frontman from Hail Of Bullets).

All in all, I would say that, even if you aren't a huge fan of the whole Gothic/Romantic Death Doom subgenre, I would give these guys a listen. As I've mentioned, it's not the same recipe throughout and if you like your music dripping with melancholy and bits of despair, but not quite reaching the Funeral Doom landscapes, this may be right up your alley. 'Key To December' is sure to hold its own amongst its contemporaries.

Without a doubt, Russia is the most productive country when it comes to churning out doom metal releases. The main culprits behind this mass production of doom is Solitude Productions and Badmoodman Records who do an incredible job at packaging the albums and releasing quality recordings. You never hear bad production from any of the bands on these labels so they have to be applauded for their high standards. The downside is most of the bands all sound the same and here is another one, Amber Tears. Don't get me wrong though, this band is very good just as many other bands from Russia but originality doesn't seem to account for much for these Russians. Amber Tears call their style pagan-doom which is weird as I don't hear nothing 'pagan' about this album. The band play a typical, generic death-gothic-doom style in the vein of My Dying Bride, Amorphis, Anathema and Draconian but musically, this band is flawless. Some of you may remember an album called "Revelations of Renounced" released by Stygian Crypt Productions in 2006, well this is the same band. To be honest I had thought they must have split but they are indeed still going. "Key to December" has great packaging to go along with the excellent, top-notch production but it is all sung in Russian with Russian lyrics printed in the booklet so it is very unlikely this band will ever break out of the Russian doom scene.

While the lyrics are in Russian, it doesn't hurt the listening experience however but I have no clue what any of these songs are about and that is a major gripe for me personally. I like to get to know an album in every detail so taking the lyrical concepts is a bit irritating. It is lucky for them, the music is at least atmospheric and engaging. Amber Tears play a slow, death-doom with a blend of spoken and deathly vocals. They also blend in acoustic interludes, melodic keyboards, backing female vocals to further enhance the atmosphere. You are probably thinking about now that the description I just gave sounds like a million other goth-doom bands and you be right. There is no surprises here at all but that doesn't mean the band isn't good, they are very mesmerizing. In one track titled "Away from the Sun," (and note I am using English translations here as my keyboard wont type Russian obviously) there is some incredible lead playing but here is something strange, the guitars don't sound like guitars, they actually sound more like bagpipes to my ears but somehow it all works in creating a moody vibe within the songs. In another song, "Beyond the Edge of Skies" the band get progressive with some soaring keyboard work so this is a fairly diverse album for what it is. The whole album is pretty emotional and in the death-doom vein with "When Snow Will Melt Away" bring the only song to get anything close to being upbeat.

There is a few good riffs but it is the meandering guitar solos that is the driving force behind the band. They have two guitarists so I am not sure who is doing what most of the time but the guitar work is exceptionally good. It is not overly flashy but it is very atmospheric and that makes a change from some other bands using keyboards as their main source of melancholy. If you are not sick of the goth-doom style already, you could do a lot worse than checking out Amber Tears and while the Russian lyrics can be a turn off, the guitar work should be enough to get you through. Good album.

Second studio album for Amber Tears from Russia, whose style belongs to the (now) classic interpretation of sad and claustrophobic extreme doom made my many russian bands. 'The Key To December' is collection of songs which are linked by a sense of melancholic sadness, as if there is something beloved to be parted ways with, a forced trip started leaving a lot of memories back having only uncertainty ahead.
Musically this is mainly highlighted by the guitar riffs, usually quite clean and open, which song after song, establish a sense of uneasiness and demoralization. I believe the result can be improved again in the future, especially adding more folk elements in the music (because, honestly, although the label of folk/doom metal, I couldn't spot anything relating to russian folk music here) because the overall content is pretty catchy and interesting.
Let's consider that we are talking about doom metal music, nothing easy for easy people, easy listening do not belong (and I hope, never will) to this kind of music, we are required a little bit of grey matter to understand and enjoy doom.
Amber Tears have released a pretty good album, I don't know what can be the feedback outside Russian borders (the lyrics are in mother language) but I'm ready for the next chapter of the trip.

New release from the so productive Russian label BadMoodMan. Amber Tears presenting us here their second full-length, an 8 tracks release lasting for a bit over 40 minutes. The band plays basically an epic Doom Metal, but there are important elements from other genres as well, like Folk Metal and Death Metal, and that give this album more variety. Melancholic, a bit depressive at times, and melodic all over, "The Key to December" is offered with a crystal clear sound, professional production and most important, a perfect instrumental execution. A really powerful album unveiling a new strong name from the Russian Doom Metal scene (Russians seem to overwhelm the World Doom Metal step by step lately). The only complaint I have about this release is that it is all Russian written and although the booklet is nice and all, contains all the lyrics, I can't do anything with it except looking at the nice pictures like a little baby, haha. At least if there were any naked chicks on it... Kidding apart, if you're into Epic Doom Metal don't miss this album, it's a very good one.