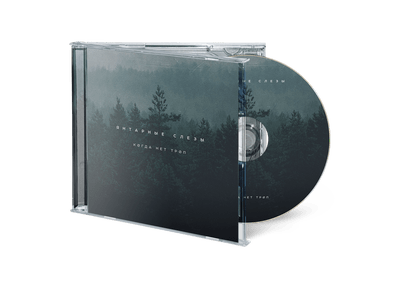 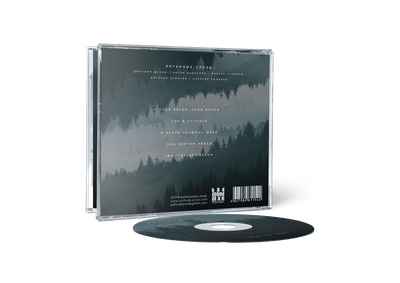 Amber Tears are a band from Russia that plays a melodic and pagan mixture of doom and death metal and this is a review of their 2019 album "Where No Trails" which was released by BadMoodMan.

Atmospheric sounding synths start off the album before going into a heavier direction which also introduces melodic guitar leads. The slower sections of the songs are very heavily rooted in doom metal while spoken word parts can also be heard in certain sections of the recording.

Death metal growls are also a very huge part of the recording while all of the tracks are very long and epic in length. A great amount of melody can also be heard in the guitar riffing along with synths also returning on the later tracks and as the album progresses a brief use of acoustic guitars and percussion's can be heard, all of the musical instruments have a very powerful sound to them as well as all of the music sticking to a very slow direction.

Amber tears plays a style of doom/death emtal t hat is very melodic and atmospheric sounding along with a touch of folk music. The production sounds very professional while the lyrics cover Paganism, Experiences and Nature themes.

In my opinion Amber tears are a very great sounding pagan and melodic mixture of doom and death metal and if you are a fan of those musical genres, you should check out this band. RECOMMENDED TRACKS INCLUDE "Where i Stayed" and "Where There Is No Spring".

The Russian Melodic Doom band Янтарные Слёзы (romanized “Jantarnye Slëzy”) know also under their English moniker AMBER TEARS, has been around since the early 2000s and “When No Trails” is only their third full-length album so far. At a first glance AMBER TEARS play typical Death/Doom inspired by bands such as SATURNUS or MY DYING BRIDE, but there is more to their music than that. Their music has Folk and Atmospheric undertones, but not in any straight-forward, cookie-cutter way. The Folk or Atmospheric vibe doesn’t come from a use of particular melodies or song-writing approach, rather, it is an aura or mystique integral to the music – a primordial, hypnotic force of the music that gives it an ancient, primeval feeling. The simple, melodic riffs have a kind of “circular”, trance-inducing quality and they seem to me as musical expressions of archetypal ideas such as the ouroboros, the cosmic wheel or the spindle of the Fates, hence the affinity with traditional Folk Music.

“Sing the Wind, Sing the Raven” has an ambient intro with a dark, haunting vibe that is pierced through by a dreamy but powerful guitar melody. The verse is mellow with spoken lyrics, the chorus is huge and explosive, all the more because of the contrast with the verse. The seven minutes long song has also a nice instrumental section with simple but captivating guitar leads. “Where I Stayed” has a verse with both soft and harsh vocals that are backed by soft strumming of a mandolin, the chorus has a huge, emotional melody, and the lead melody at the end of the song is breathtaking. The nine minutes long “In the Whirlwind of the Last Days” has a trippy intro with chanting and a minimalistic riff of what sounds like some primitive bass harp. The verse is acoustic with only a primitive drumbeat and strumming of a mandolin whose “call” is responded to by a huge, epic riff. Lead melodies and soloing in the mid-section provide the song with a great sense of progression, it ends with an ethereally sad and tender outro. “Under the Stars Light” is the most vivacious tune on the album with a driving, folky melodies; the soloing is a bit more flamboyant, but always controlled and tasteful. The album closes with the ten minutes long “Where There Is No Spring,” that gives me a MY DYING BRIDE vibe and has a powerful, deeply mournful chorus.

Sorry SWALLOW THE SUN, but this relatively unknown Russian band takes the Death/Doom cake so far this year as far as I’m concerned. AMBER TEARS don’t do anything out of the ordinary in terms of melody or songwriting, but everything is “on point” in the songs and on the album (its play time is around 40 minutes, basically you might call it “short and sweet” for Doom Metal), and their music has a spellbinding energy. They fuse harshness and tenderness to create powerful, dreamy songs that are captivating and memorable. Death/Doom fans – but not only they – definitely shouldn’t miss this.

It seems to me that very few people expected the release of the new album of AMBER TEARS - nine years have passed since the release of the previous album, and I personally forgot abot this band from Penza. As it turned out, the group did not die, but just very slowly sculpted its new creation. And I must point out that the wait was worth it.

On the first two albums, AMBER TIES were honest clo... followers of GODS TOWER; they interpreted the Belarusian folk guitar sound in their doomish and soulful style. It sounded cool, but the impression was spoiled by somewhat sloppy compositions and fucking disaster of a vocal. Regarding the new album, there are two news: the vocals are better, and GODS TOWER cloning was left in the past. Although AMBER TEARS melodious guitar riffs still contain some references to GODS TOWER, most of the material is “independent” now. If you carefully study the compositions with a magnifying glass, it turns out that there is nothing special about them. But a big role is played by the powerful and atmospheric sounding of the instruments, as well as the ingenious scatter of additional tracks. Listening to a traditional doom riff is one thing. Listening to this riff, accompanied by a simple and effective acoustic part or keyboard arrangement, is another thing. “When no Trails" is incredibly dramatic, musically emotional and beautiful. Finally, once again I hear the band not hesitating to let the guitar float freely for a minute and a half, so that it can play great solos. Great - just like SATURNUS or DOOM: VS on “Earthless”.

The vocal is still the weakest point, although now it can be perceived without twitching eyelids. When Mr. Bandurin needs to growl, he is so desperately straining that I start worrying about his underwear. Let the respected sir not consider it an insult - he tries, but it seems to me that it is better to sing in a more natural manner than to try to squeeze something unsuitable for consumption. In addition, the vocals are devoid of emotion, it's just a neutral roar. The same Thomas Jensen from SATURNUS, for example, knows how to growl much lower, more extreme, and still manages to tear the soul to shreds. It would not be superfluous to peep him a couple of techniques.

In general, the return of the band after a long pause was extremely successful. The CD for my collection is on it's way. (I am (slightly embarrassed by the design though - what kind of post-punk is this?). Unfortunately, "When no Trails" seems to be the last work of AMBER TEARS, but it is not a shame to leave on such a note.

For practical reasons, we'll stick with the English version of the name. The same goes for the album title. The band uses their native language, but the ones promoting the music in the Western world, fortunately takes into account our illiteracy toward the Cyrillic alphabet.

17 years into the career, and the quintet has arrived at full-length number three.

The band performs a kind of calm, mournful death/doom with roots in pagan/folk. Although the pace is kept in check, there is a lot of sound to be traced from the quintet. The two guitars, the bass and the drums, all form vital rhythms in dynamic compositions with layered melodies.

The music is too gentle and mild to sort in under the denomination umbrella extreme metal, but the music is comfortable and far from monotonous, even though the floating expression of the Russians creates a dreamy atmosphere.

What Amber Tears brings to the table, definitely ain't bad, and if your curiosity has been triggered, I advise you to take a closer listen to When No Trails.
Solitude Productions 14.04.2019, 18:09
Prev
1 2
Next
Write a review