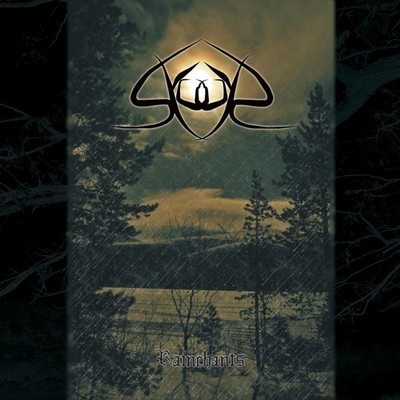 Instrumental Atmospheric Pagan Metal – didn’t have that one yet, but Russian one-man project SKOGYR, comprising of multi-instrumentalist Farakh, is testing out new waters. Now there hardly is any information to be found about him, other than that he formed SKOGYR in 2005 and had one self-titled demo out before the release of this full-length album. Therefore no history here, but on to the music.

And at first I had not even realized that the album was completely instrumental, as first track “Chant I” seemed like an intro, but now, somehow most parts of this CD seem like a very long intro to me. Now before you get me wrong, the atmospheres Farakh is building up are very nice and cohesive, with mostly the keyboard leading the way when it comes down to the melodies, while the guitars act more as background rhythm support and it all works pretty well with the apparently very nature-geared image, so in no way this is any incompetent stuff, as the production also has a pretty good balance.

Now the problem I run into is that over a certain amount of time, this is all nice and dandy, but in the end the musical substance and variety gets pretty much lost over the course of the second track already, “Chant II”, clocking in at over 12 minute. Surely the tempo goes down a little here and there, adding a little more atmosphere, but unfortunately that’s pretty much it. And not just within the songs this “phenomenon” raises its ugly head, but also in between songs, giving the impression that it’s basically one 37 minute track that is just divided into four parts instead of giving us four different approaches to a similar theme.

The only track breaking out of this scheme is closer “Silent Hill”, which is a cover version of the “Silent Hill” game theme by Japanese composer Akira Yamaoka, of which I don’t know the original, so I can’t really gauge the quality of his interpretation, but sounds good to me, haha.

So how should I rate this? It undoubtedly is well done and all, so it depends on if Farakh had intended it to by repetitive and hypnotic or just failed to bring in the variety he might have shot for. In the first case, I would probably give this a 7/10, in the latter a 5/10, so I think that a 6/10 rating overall is warranted, if you are toying with the thought of buying this, by all means try to listen in first, just to avoid any strange surprises when you pop it into your player for the first time...