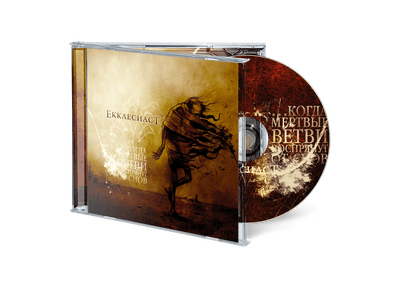 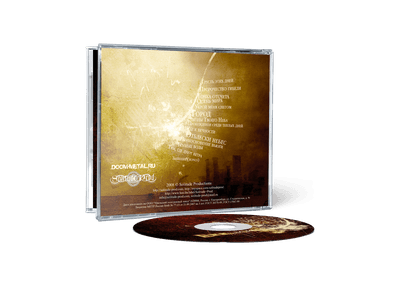 Legendary Russian band Ekklesiast returns with the new studio album compiled of the material from the two old historic demo-albums, not officially released before, "When the dead boughs will awake from the dreams" and "Touch of a snowstorm". The songs have been newly reconceived, recorded and mastered in a professional studio. Having inspired the old songs with a new life, the new Ekklesiast, once again, proved the title of one of the best Russian bands in the genre, combining in their music the inner dramaturgy with the outward rush of powerful doom riffs. in english - Ekklesiast - When The Dead Boughs Will Awake From The Dreams in russian - Екклесиаст - ...Когда Мертвые Ветви Воспрянут От Снов

...When The Dead Boughs Will Awake From The Dreams is the second offering from the Russian trio Ekklesiast, a band formed in 1994.

Everything about this is in Russian, so I had troubles finding out what the name of the band and the title for this new album is. All of the lyrics are naturally written and sung in group’s mother tongue and it makes it hard to understand for the majority of our readers. I think it would have been nice thing if the band or their label provided some kind of translation or promotional sheet.

When it comes to the musical content itself; I would say that this is yet another of many in a raw metal releases combining the aggressiveness and brutality of death metal with melancholy and darkness of doom metal. The band incorporates the occasional use of keyboards, as back-up to the overall nice singing and slow, deep and down-tuned and slow guitars. The vocals are most of the time clean, but also with some deep grunted parts which are quite nice.

I find this record to be rather mystical and bizarre than interesting and definitely not unique. I’ve heard many bands playing similar kind of music lately and it all sounds just familiar. The only thing that separates Ekklesiast from the majority is their focus on Christianity, so I guess you can call them a ‘Christian Doom’. However, if you’re die-hard fan of this genre and fan of East-European death/doom metal then you might also find this CD interesting. For all the others; waste of time as this material is too odd, too long and simply too boring.

Ekklesiast (don't have a cyrillic keyboard, I'm afraid) are a strange band; they don't really do anything that screams uniqueness or anything, but they don't really sound like anything in particular either. Things swerve wildly between slow, melodic death metal type figures, to mid paced heavy metal patterns (these dudes definitely love their Metallica), to more black metal sections (albeit black metal in it's most relaxed form), to doomy bits. Sure, it's pretty much all "mid tempo and melodic" but they really stretch that formula as much as possible.

Having said that, while the sound is hard to pigeonhole, it's not terribly exciting. The dudes in Ekklesiast have some good ideas, but the thing as a whole just never really gets the pulse racing or the head banging. I certainly found my attention lagging throughout this album; and if it wasn't for the occaisonal genuine tempo change like the crushing doom parts in "Stars of the Sky" (probably the best song here, with some excellent Candlemass influence) you'd just drift away completely.

It's the tempo that's to blame (and the wholly unnecessary 74 minute running time). Sure, adding in a tempo change brings all sorts of songwriting/coherency type problems to the fore... but in that weird, nebulous genre known as "death/doom" it's pretty much a requirement. There's a lot of My Dying Bride influence here and often I can't help but feel how much better this material would be if those guys did it- sure it wouldn't flow as well, but there'd be a few tempo changes, a few much faster bits and the occaisonal slow, despondent section with just a guitar ringing out. I guess you could also point a finger at the drummer- he's not bad, but sort of helps this album into the obscurity that's probably destined for it. More energy, and in many moments, less energy from the drummer would be well appreciated. He meanders throughout and doesn't really mix up the snare at all.. no half time or double time, just the same weary plod. It's all about the dynamics.. screw them up at your own peril.

I hope these guys give us another release soon-ish.. There's a lot of potential here that's as yet untapped. The leads that occasional sprint off and rise above the meandering rhythm guitars are great, the song structures somewhat atypical, the riffs a healthy mix of a large amount of different influences. It's just that this way too long and for the most part drags on one tempo. Meanders far too much, I guess (almost as much as this review, you may say). Not really worth listening too; hopefully future albums by these guys are a bit more lively.

But, it is about the music. And that sucks. Re-re-re-re-regurgitated funeral death/doom riffs, accompanied by this crazed Christian mumbling/grunting about the Lord. There are also some clean vocal parts, which are out of key and just plain retarded at times. The noble fact that this is actually a re-recording of their 2001 record of the same title and a number of songs of their debut demo record Touch Of Snowstorm does no good either. Fact is that they claim to have re-interpreted, recorded (perhaps religionized!) and mixed these songs in a professional recording studio. Waste of time and money if you ask me, for the sound quality is quite shitty.

The worst thing is that this monster lasts over 74 minutes, which actually achieves to get the listener depressed, not through music but through its level of irritation. But when it’s over, there is light at the end of the tunnel. I hate to be a dick, but this is a piece of shit that nobody should ever listen to. Not even God likes it.

I never really heard any Russian bands before, and because of my aversion towards Russian language, wasn’t planning on doing such a thing, but when I saw the beatiful cover of the re-recorded album of Ekklesiast I decided to set aside my prejudices. Two other facts also encouraged me to listen to the album: that the band plays doom metal similar to that of My Dying Bride (with less clean vocals) and I like the British band pretty much and that the song titles were written in English on all the websites (however, this later proved to be a mistake). So I laid my hands with anticipation on this marvelously designed release. The graphical realisation perfectly conveys the depressive, lonely, grievous and fate-stricken mood of the music. Not even the band logo and the album title written in cyrill letters are disturbing. I would especially emphasize the visuals of the disc itself, which is simple, but very effective and suggestive. Most of the bands unfortunately do not pay enough attention to this – at least for me – very important issue. A very unpleasant surprise welcomed me in the booklet, since all the lyrics are printed in Russian and thus, are also sung in the same language. Objectively judging, this should not cause a problem, but for me – and I think I’m not the only one – this takes away from the enjoyability of the disc. Unfortunately, I don’t have the English translation of the lyrics, but I do have the titles translated and reflected by these are the usual themes of grief, pain, autumn, passing away, and generally the end.

Already during the first track – Grief of These Days – a grim mood enwraps the listener, thanks mostly to the organic, not-at-all-polished sound of the album. After a dynamic start comes a characteristic, doom-typical slowing and a sad, spoken part upon a hammering musical base. Though the Alexandr’s voice does not provide anything new, it is perfectly okay – both the tired rhetoric and the growls are nice. A great advantage of the band is that you won’t get bored during any of their tracks, they change their music with excellent timing. The opening track ends with an acoustic part, which reminds me of the greatest bands of the genre. In the next song – Prophecy of Doom – the high-pitched guitar tones make the beginning quite enjoyable. We can also find an acoustic/spoken insert in this song, which the band realises nicely. The length of the tracks is around five minutes, and that is a perfect dose at a time of such music. Many doom bands only think in 8-10 minute songs, which is not always a fortunate thing to do. I suppose Ekklesiast were aware that they’re better off without writing epics. The second song is closed with a fine, but somewhat monotonous part.

Countdown Point strengthens the listener’s faith in doom with slower tempo and tries to stick into his mind with its well-written guitar melodies. Maybe it’s just me, but due to Russian language, the lyrics are not quite easy to memorize which is a pity, because judging by their rhythm and melody I would gladly sing them along. There is no particular problem with the musicians, everybody does what he’s meant to and neither of them has any difficulties with this. The greatest problem with the disc is that we can find no trace of real personality, and without that this genre – along with many others – is a bit overloaded. Bits and pieces across the album – like the beginning of World’s Autumn – are too much similar to My Dying Bride and this does no good to the reputation of the band. The foruth song drowns holds no cause of interest already and considering the number of remaining tracks, this is a fact to be worried about.

Fortunately, the fifth song – Cover Me with Snow – brings a little excitement into the album through its fast tempo and unusually melodic voice, which make it one of the best piece of the Russian fellows – despite the very MDB-like title. Melodic vocals can be heard later in Dark Waters, too, but there the singer tries to produce melodies which are not suitable for him, so we get something terrible. Even though The City is an enjoyable song perfect to headbang to, it contains nothing worth mentioning besides its solo. That, however, is so well written, that it saves the song from total boredom. We can find little pieces of joy in the rest of the songs here and there – like the very nice saw-like part in Stars of Your Sky or the very atmospheric acoustic insert and closing in Step to Eternity – but this is not enough for salvation. Thus, I am led to the conclusion that mostly – if not only – those will enjoy this album, who can’t wait until the new My Dying Bride album comes out (which is not that far anyway).

I must say, that I am disappointed with Ekklesiast. After the beautiful promise of the cover it slowly became clear that apart of that, there’s not too much uniqueness or artisticness in this release. At first, I considered the language the biggest problem, but I realised that it is nothing compared to the total lack of personality. I can really only recommend this album to those who are eagerly counting the days until the release of the many times mentioned British band’s new disc entitled For Lies I Sire. Besides them, maybe the most determined doom-fanatics could enjoy …When the Dead Boughs will Awake from the Dreams. For the „general” metal-listener, this could only be background music – at best. The Russian guys have the knowledge, but they need to make a lot of progress in personality and I think it wouldn’t be a problem if they switched to English. I’m really sorry.