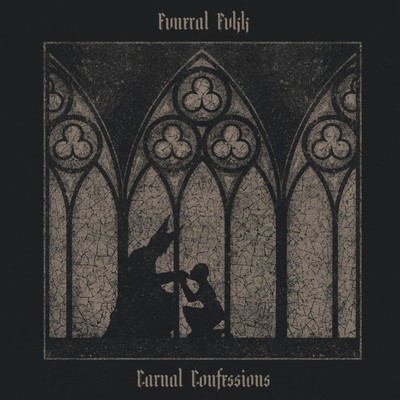 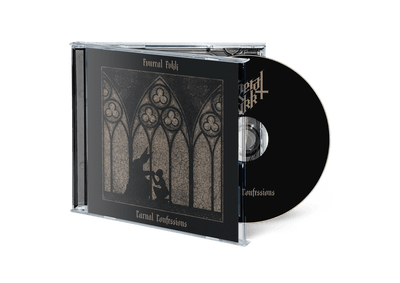 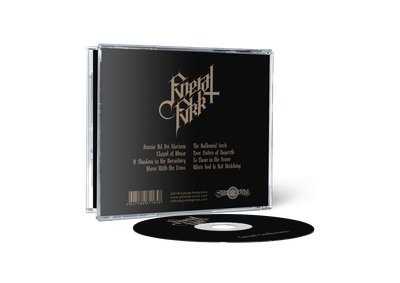 After the successful EP “Lecherous Liturgies”, which received positive critical responses that mentioned among other things the wit of the lyrics and the stylistic similarities to Solitude Aeturnus, Fvneral Fvkk has reached a new milestone by creating a perfect masterpiece of epic doom metal. “Carnal Confessions” can really be recognized as a standard of the genre: melodic, epic, powerful, and majestic doom metal with deep male vocals. A beautifully designed booklet complements the picture of impeccability. This is a piece of true black brilliance.

Tracklist:
1 Omnia Ad Dei Gloriam
2 Chapel Of Abuse
3 A Shadow In The Dormitory
4 Alone With The Cross
5 The Hallowed Leech
6 Poor Sisters Of Nazareth
7 To Those In The Grave
8 When God Is Not Watching

FVNERAL FVKK is a four-piece Doom Metal band from the Hamburg (officially known as Free and Hanseatic City of Hamburg), Germany. Yes, the same city that inspired hamburger, the delicious sandwich rivaled only by the hotdog, or frankfurter — holy crap, does Germany totally own the two most iconic meals on the planet! And beer! Beer, hamburgers, hotdogs. Deep breath. Carrying on . . . another thing created in Hamburg is FVNERAL FVKK’s first full-length album, “Carnal Confessions,” a darkly rich album addressing a deeply disturbing subject. Short review: the album is remarkable on multiple levels. For the long review, please read on.

Here’s the scene: I’m going to lunch with some work friends. I’m driving, so I control the sound. A dedicated reviewer, my playlist consists solely of albums I’m assessing for that week. I queue up “Carnal Confessions” and jump to track five, “The Hallowed Leech,” which showcases an incredible vocal performance by Canto Cinaedicus. The conversation goes like this:

Them: “Oh, is this one of those bands you review for that magazine?”
Me: “Yep.” There’s a few seconds of no talking while people listen. Canto has ended his incredible intro and Decanus renders a killer but tasteful riff. My sound system is good enough to amplify Vicarius’s bass, which reverberates through the seats punctuated by Frater’s powerful drumming.

Them: “Well, he has a really nice voice. I could listen to this band.” Everyone agrees. Clearly they aren’t listening to the lyrics . . . or maybe they are and my colleagues are dark as hell and I somehow never noticed. Someone says something about METALLICA. Someone else mentions OZZY OSBOURNE. This is how non-metalheads talk about metal.

Other them: “That bass is really good.” General agreement.
Other other them: “What’s the name of the band?”
Me: “Well, first imagine all the u’s are v’s.”
Them: “Okay, like CHVRCHES.”
Me: “Yep, just like that. FVNERAL FVKK.”
All of them: “What?!?” Riotous laughter ensues and not one of them will ever buy the album. Too bad for them.

“Carnal Confessions” douses you in rich, melodious tones of doom accentuated by clear, resonant vocals. The production values are excellent and the musical execution precise. Thematically, the album tackles ecclesiastical maltreatments, specifically sexual abuses of the clergy. And they do it in such a way that explores the emotive pain and suffering without being gratuitous or exploitive. The outcome is an immensely listenable album that affects the listener at a profound level.

Canto’s baritone, clean style is impeccable and will rattle the glass of your tightest storm windows. Decanus Obscaenus’s down-tuned riffs and melodic solos are both intense and foreboding. (I should note that live, the band used to feature Abbas Animalis on rhythm guitar though he has recently been replaced by Pastor Pellex.) Vicarius Vespillo on bass and Frater Flagellum on drums constitute a formidable rhythm section. Some people have called FVNERAL FVKK’s overall style “liturgical,” though I am not convinced.

Best tracks on the album are tough to pick; they are all very strong. Personally, “The Hallowed Leech” tops my list followed by “Chapel of Abuse” and “Alone with the Cross.” There are no lesser tiered tracks. Every song is stunning, including the short intro, “Omnia Ad Dei Gloriam” (translation: all the glory of God), a sardonic and disturbing primer to the seven tracks that follow. If you’ve followed FVNERAL FVKK since their 2017 debut, “The Lecherous Liturgies,” you won’t find any dramatic differences and you won’t be disappointed. They’re slightly tighter and just a tad bit faster; otherwise, they’ve remained consistent in all the right ways. Overall, FVNERAL FVKK delivers an incredibly moving album with “Carnal Confessions.” This is Doom incarnate.

Although the band cite interests such as perverted debauchery, extortion and abuse in the name of God and this contributes to the bulk of their lyrical content, the end result of the music is not quite what you’d expect, especially when you take into account the tongue in cheek name of the band! What we’re actually presented with is an epic sounding slab of melodic doom which is, if truth be told quite a solemn affair. Somewhere between Candlemass, Ghost and My Dying Bride, we find the forlorn sound of ‘Carnal Confessions’ This is the first full-length release from FVNERAL FVKK and it’s a FVKK-ing good one!

Eloquently put and yes this album does somewhat juxtapose beauty with the horrific traits of the human race.

Each track seems to take a single main riff and run with it while the vocals flow morosely over the top, sometimes as if completely detached from the guitar, it’s a simple but effective formula that they repeat. Cantor Cinaedicus has a great voice, which gets his bleak point of view across without being too over the top as he gently assaults us with some rather harrowing lyrics. ‘Chapel of Abuse’ is probably the standout track here and the heaviest, it has a riff so meaty they could sell it by the pound at the local butcher's. Bass and drums are performed well throughout but for the most part blend into the background for the purpose of the musical tapestry that’s created here.

Production is top-notch with a clean but not polished sound enabling plenty of that grime to seep through. This is a slow and stylish, sprawling piece of doom that anyone with a taste for the darker side of music should enjoy.