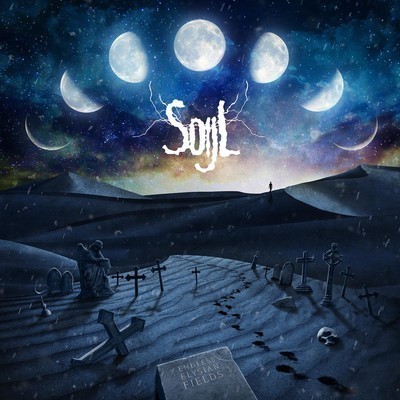 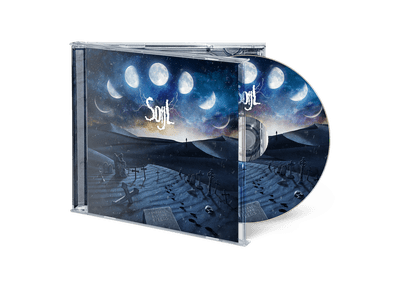 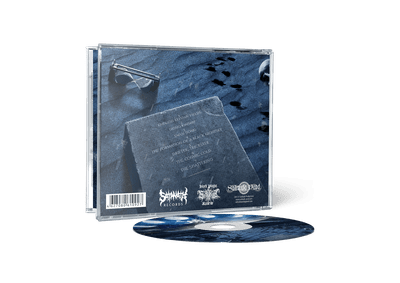 If proof were actually needed that most, if not all search engines, are hideously biased towards whatever it is the mainstream wants to look at, just enter Swedish doomsters Soijl's name into the search bar and press play. If you're lucky enough to get an option to head in the direction of websites devoted to Solitude Productions' Death Doomsters then crack on. Otherwise it's straight towards the realms of soil pipes, soil stacks or a band called...Soil. Who knows, they might be really good. Difficult to say these days. They look like they could easily be post-grunge mediocrity personified, or even some manifestation of metal-core, whatever the hell that actually is.

Soijl are neither. Which is a relief. With twin-guitar lines turning the clock back to the days when 'Serenades' hardly left my turntable and with a punchy modern sound giving glimpses of what Anathema might have sounded like if they'd stayed Doom and released at least one or two more albums with Darren White, 'Endless Elysian Fields' is a wonderful expression of what Doom Metal can be all about. Dark, brooding, emotive, and filled from top to bottom with heavy, stately riffs.

Despite a lack, or sparse use, of keyboards, I'd venture to say there's a 'Gothic' tint to this album. Although, to be honest, I wouldn't really know one end of the 'Gothic' Doom scene from the other. (I do like Draconian's 'Arcane Rain Fell', if that counts). But the emotions of loss and grief are present, as a quick glance at song titles 'Dying Kinship', 'Swan Song' and 'The Shattering' will tell you, and there's some superb music on offer here, born from those shadowy emotions.

Production wise, fans of latter day Funeral will most likely approve of the beefy, crystal clear mix, as well as the excellent guitar work, lacing the album with rich, lengthy bar chords, silkily orchestrated melodic leads, and enough pinched harmonics to make Zakk Wylde blush. The Funeral comparison gains momentum when one thinks of how they embraced a more 'metallic' approach on albums like 'From These Wounds' and 'Oratorium', and thankfully in Soijl's case, there's less of the grandiosity that clouded the latter of those releases. The Anathema influence is evident when the vocal delivery is varied from growls to clean and then into purposefully spoken word. Musically, just listen to 'Swan Song' and bask in it's reverence to the likes of 'Crestfallen' and 'Sleep in Sanity'.

Despite the aforementioned scarcity of keyboards and other possible instrumentation there is a distinct variance of sound within the music, albeit a subtle one. Pace shifts from prevalent funereal and slower passages to faster, more aggressive segments. Cleaner, more open guitar lines morph into majestic sounding chords and up their gears into quicker riffage reminiscent of certain elements from mid-period My Dying Bride. As previously noted, the vocals are anything but one dimensional, although they perhaps sound a touch generic when they start to stradle the borders between Death and Black metal.

Overall a more than decent listen. I've been going about my daily business and found certain lines and motifs reverberating around my head, and that hasn't happened for a while. Not much of a recommendation perhaps but still. There's plenty of stuff like this out there. (There's quite a lot of it on Solitude Productions truth be told). But not all of it is as good as this, and it's even on Spotify...but you will have to search for it...

Whenever an email mentions the words 'atmospheric' and 'doom', my long-haired nineties alter ego suddenly interupts his hibernation. His eyes opens a little bit while my finger clicks on the link. Between his sleepy eyelids he sees more interesting words, 'Saturnus' and 'Skald', two bands he's been a fan of for quite some time now. At that point, he completely takes over, demands the album to be played while he raises his horned fists to the majestic sound.

Yes, Soijl is the newest project by ex-Saturnus member Mattias Svensson. He started this solo-act in 2008 already but it wasn't until 2014 that Soijl became something serious. By then Henrik Kindvall of Skold joined in, taking care of vocals and lyrics. Now the duo released their stunning debut upon the masses, re-introducing the atmospheric approach to doom metal in a highly convincing way. The hibernating doom kid inside of me secretly hopes this will be followed by live performances.

The album opens with title track 'Endless Elysian Fields', immediately showing what this project stands for. Slow but melodic guitars and a wide array of drums form the foundations for the deep growls and often blackened screams to thrive upon. Although the tempo is quite sluggish, there's still a decent amount of energy, mostly coming from the brilliant use of drums and percussion. I especially like the double bass drums used on this album as they provide a droning element which I simply can't resist.

'Dying Kinship' takes the same elements and adds layers of guitars. It's because of music like this that I ended up listening to funeral doom, post-rock and drone music, but it's always great to return to this kind of melodic doom metal. Bands like My Dying Bride, Anathema, November's Doom and Doom:VS often come to mind when I listen to these tracks. It breathes the same atmosphere of solitude, despair and impending agony. What's more, Soijl even succeeds in translating the genre into a version that works quite well in the present day doom scene where bands like Pallbearer roam.

And Soijl isn't even done there. In a way, this duo also succeeded in bringing in a few depressive black metal elements. Once in a while, especially when the blackened vocals take the upperhand, the whole thing takes a twist towards a bleak, eerie atmosphere. Minimal but effective use of keyboards enhance that atmosphere, making 'Swan Song' a bit of a masterpiece actually. 'The Formation Of A Black Nightsky' takes that even a bit further, and faster, and is my favorite track on this splendid piece of work.

I only mentioned four songs in this review and there's still three more to come, but I'm not going into a song-by-song thing with this one. By now it should be clear that this albums comes highly recommended. It's a welcome addition to any collection where the bands I mentioned in this review are present. There's plenty of variation, melody and intensity to remain interesting for a few consecutive listens, that's for sure. So I'm going to let that long-haired doom kid enjoy this one a little more.

Soijl are a solo project from Sweden that plays an atmospheric form of doom/death metal and this is a review of his 2015 album "Endless Elysian Fields" which was released by Solitude Productions.

A very dark and atmospheric sound starts off the album along with some heavy and melodic guitars a few seconds as well a s some death metal growls and the music goes for more of an early 90's style of doom/death metal and you can also hear black metal screams being utilized at times and the solos and leads are also very dark and melodic.

Soijl plays a musical style that is mostly rooted in a melodic and atmospheric style of 90's style doom/death metal that also mixes in influences from black metal to create a style of his own, the production sounds very professional while the lyrics cover despair, fear and suicidal themes.

In my opinion Soijl are a very great sounding atmospheric doom/death metal band and if you are a fan of this musical genre, you should check out this album. RECOMMENDED TRACKS INCLUDE "Endless Elysian Fields" 'The Formation Of A Black Nightsky" and "The Shattering".