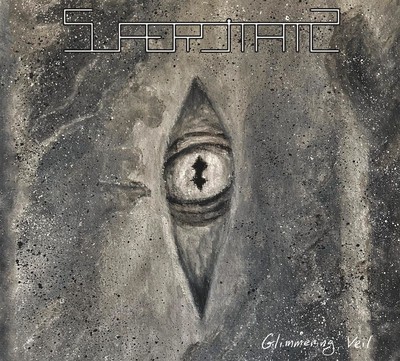 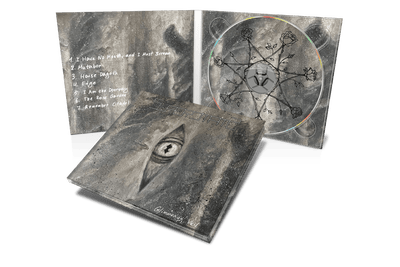 The second album by the Irish band Superstatic founded by Rustam, the founding member of Rakoth and Umbral Presence, who also used to play bass in Cruachan. The name of the band is derived from the debut Rakoth album, "Superstatic Equilibrium", however this time Rustam (under the name of Alex) has turned to doom death metal. On "Glimmering Veil" the music leaned more towards funeral doom metal, became darker and more complex, incorporating elements of horror. At the same time lyrics are based on works by Harlan Ellison, Wilhelm Hauff, Stephen King and Arthur Machen, and videogames Morrowind and System Shock 2, which makes listening to "Glimmering Veil" even more interesting and unpredictable.
Guitar parts were performed by Sergei Lazar (Arkona, Rossomahaar), who has also mixed the album. The album was mastered by Tom Waltz, known from his work with Venom, Annihilator, Dopethrone and many other artists.
The album is released also as a limited edition four panel digipak featuring a twelve page booklet, in order to make your journey into the depths of "Glimmering Veil" even more unforgettable.

Man, it's easy to get rusty when it comes to music, and these pandemic years have been tough in a lot of ways, for a lot of different people. For me, that means this is the first time I've even tried to write a review in 2021, and there's a bit of dusting-off to do to get back into that. Maybe Superstatic is a good place to start - there's a band that has followed the Grateful Dead credo of 'What A Long Strange Trip It's Been'. Originally starting out with Black Metal projects Rakoth and Umbral Presence in Obninsk, near Moscow, during the late 1990s, multi-instrumentalist Rustam (or Noctilius, take your pick) ended up as bassist in Dublin-based Celtic Metal band Cruachan, whilst overlapping that with the formation of Death/Doom project Superstatic (taking their name from the first Rakoth full-length), under the name of Alex. Debut album 'Key To The Abyss' followed as a semi-independent release in 2018, sophomore 'Glimmering Veil' is today's Solitude release.

At first glance of the EPK, it's a bit of a mixed bag that draws inspiration from everything from "golden age" sci-fi to contemporary horror literature to modern computer games, and that does rather show through on early listening. The press release suggests it leans more towards Funeral Doom, but I'd dispute that - it's basically far too uptempo, and with too many interjections and ornamentations to come very close to a Funeral aesthetic. This is fairly old-school Death/Doom all the way, and none the worse for being simply described as such, in musical terms. And, despite some superficial correlation between the source influences, it's also fairly old-school in presenting a collection of songs rather than an obviously conceptual theme.

With tracks ranging from 8 to 17 minutes, it's also a bit of a big beast, both in duration and sound, with plenty of heft and crunchiness to the largely guitar-led compositions. Each of those tends to cover a lot of ground, too, with plenty of momentum shifts, and places where each of the other instruments - drums, bass, keyboards - come to the forefront. The guitars may take overall honours in sliding from massive riffs to soaring leads, taking in all sorts of knifing distortion and oddly delicate moments, as they drive proceedings. However, they're closely matched by the way the male vocals range from rasping whispers to almost-chanting to rough-edged semi-growls, with a featured female voice adorning the tracks 'Edge' and 'The Rose Garden'. Elsewhere, indistinct spot effects, samples or quirky instrumental textures lurk in the background, adding some dark atmospheric feeling; that, coupled with the various and quite diverse keyboard voices used, even conjures something of an Abysmal Grief feeling in places - though, taken as a whole, 'Glimmering Veil' is more an aggressive and brutal sci-fi Doom venture than horror-movie creepy soundtrack. It's cold, hard-edged, relentless and discomforting territory, laid out and perhaps even typified by the opening track, taken from Harlan Ellison's grimly hopeless short story of the dystopian cruelty inflicted on the last few surviving humans.

To me, that cuts a little bit both ways. Individually, there's nothing you could really point to as being wrong with any of the tracks: they're well-crafted, well-executed, and there are some very engaging, inventive elements - as with the eerie rumbling bass section in 'House Dagoth', to pick just one example - scattered through the many changes of direction and tempo. However, that mix of busy complexity and quite crushing heaviness pervading the album does make it a bit of an endurance test to sit through all 70+ minutes without it becoming a little oppressively 'samey' in texture, if not in detail.

That's my only complaint, though. As a collection of intelligent, compelling, and stormy Death/Doom narratives, these stand up very well indeed, but they're perhaps best taken in more digestible chunks than as a single monolithic slab if you want to really concentrate and follow their twists and turns. It's an album I'd file alongside something like 'Exulansis' by Somnus Aeternus: difficult but rewarding, successfully capturing and articulating the motifs of both its sci-fi source inspirations and musical direction, deliberately unsettling and uncomfortable in what it chooses to explore. All of those, clearly, are good things to have in a Doom context, but when they're presented with this level of size and intensity, you really need to be in the right mood and braced for the impact to properly appreciate them.

Glimmering Veil is the second album by the Irish band Superstatic, and you’ll have difficulty finding a 2021 record that’s as simultaneously unnerving and fascinating. It’s a work of extravagant and unpredictable imagination, labyrinthine in its movements, fantastically textured in its sounds, and both deleterious and awe-inspiring in its moods.

It extends through seven long tracks across one hour and 12 minutes, but never allows the listener’s attention to wander. To borrow from the following review, we can recognize downcast and distraught human emotions in the music, but really, nothing sounds truly eartb-bound.

“Death/doom” is the simplest label one might affix to the music, but it would be an absurdly simplistic label, unless perhaps you add “avant-garde” or “experimental” as another descriptor, as a way of hinting at how wide-ranging the experience becomes.

We have a lot more to say about the album below, but beyond the torrent of linguistic impressions we also have a full stream of the album in advance of its imminent October 15 release by Solitude Productions.

Borrowing from the treasured Harlan Ellison, Superstatic named the opening song “I Have No Mouth, And I Must Scream“, and first released it with a video (which you’ll find below). It begins with slow, immense pounding coupled with raw, abrasive chords, low growling bass tones, high ethereal shimmering sensations, and macabre crocodile mutterings. The effect is eerie and ominous, but proves to be the prelude to a cataclysm of sound — a dense mass of marauding riffage, earthquaking low-end upheavals, and vicious vocal assaults.

The song continues to morph between these two sensations — the titanic crushing impacts and the paroxysms of violence, with quivering and screeching arpeggios lacing the slow detonations with shrill sounds of unearthly misery and derangement, and bursts of rapid-fire drum assaults continuing to fire the pulse during the more chaotic and mauling phases.

As openers go, “I Have No Mouth…” is riveting, and even perversely entrancing despite how brutally destructive and mentally unnerving it is. But the rest of the album is if anything even more unsettling and enthralling.

Depending on where you find yourself, the riffing slithers and becomes poisonous, whines like abandoned children, gouges and chews, darts and cavorts, jitters in frenzies, and jolts like enormous jackhammers. High wailing sounds and deep, solemn and soaring chants create hallucinatory moods of occult ritual and ghostly horror that chill the blood. Wafting arpeggios channel sanity-destroying grief, and glitter like gold.

You will hear bursts of flickering electronics, mysterious tones that resemble a bassoon, the pulse of a beating heart, the buzz of hornets, the sounds of a bass scraping against stone, a piano and violin duet coupled with dulcet singing, and celestial ambient radiations that create a feeling of spectral wonder.

In its rhythmic variations, the songs heave and stomp, crawl like giant dying beasts, and thunder in seemingly world-ending cataclysms.

The music becomes vast and void-like, immense in its terrifying magnificence, but also cramped and claustrophobic or barren and desolate in its manifestations of hopelessness. All these variations, and more, persist in drawing the listener forward, ever deeper into the terror realms that Superstatic have created on the other side of their glimmering veil. We can recognize downcast and distraught human emotions in the music, but really, nothing sounds truly eartb-bound.

With few exceptions the album is not a warm or welcoming experience, but it’s undeniably ingenious and indeed relentlessly fascinating, completely captivating from start to finish despite its significant length. We urge you to carve out the time necessary to listen to all of it:

Superstatic was created by Rustam, the founding member of Rakoth and Umbral Presence, who also used to play bass in Cruachan. Guitar parts on the new album were performed by Sergei Lazar of the band Arkona (and he also mixed the album), as well as band-members P.C. Stevens and Erwin Ryan, and Tauro Alterfour gets credit for the terrific drum performances. The alien angel voice was performed by Cynthia Voland.

The lyrics were based on works by Harlan Ellison, Wilhelm Hauff, Stephen King and Arthur Machen, and the videogames Morrowind and System Shock 2.

The album was mastered by Tom Waltz, who used to work with Venom, Annihilator, Dopethrone and many other artists, and it features artwork by Jane Dickson.
Solitude Productions 23.10.2021, 09:44
Write a review