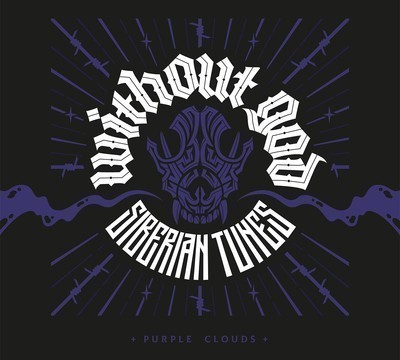 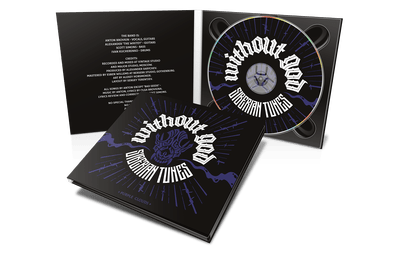 The soil that has been cultivated by Without God for the past seven years since the phenomenal “Circus Of Freaks” gave a perfect harvest. The first crop has already been delivered in the form of the EP "Siberian Tunes: The Green Light", and now the second part has arrived in all its strength: the full-length album "Siberian Tunes: Purple Clouds" performed in a hard, dark and aggressive way, without mercy and compassion to listeners, pushing one straight into hell at full speed. The limited edition coming as a noble 4-panel digipack addressed to the true fans best expresses the message by Without God.

This year already whelped pretty sturdy and traditionally-minded Doom Metal records that we still fondly remember. But the real rush towards oldish tears and trepidation started in 2020 when old-style doomers boarded the massive RMR 100-gun flagship with a mighty roar. Since then, our lookouts never stopped searching for more slow ‘n’ heavy sorrowful pieces.

One would typically go a-hunting on anglo-saxon shores for bands in that genre with – perhaps – a few injections from Western Europe. But sometimes the RMR radar will detect promising candidates from other spots on our vast globe. So, let’s head East for once.

The Russians of Without God with their newest album Siberian Tunes: Purple Clouds definitely qualify. Here’s a band that one would easily place somewhere in the boonies of the American Mid-West. Their Doom Metal comes with a deliciously sludgy stoner itch. One that’s full of stellar slow-marching riffs and roaring solos to die for. And all of that comes on a foundation of good old Stoner Metal stuffed to the gills with fuzz and wah-wah.

In a way, you’ll find a swampy version of Khemmis going full-tilt Crypt Sermon. And sometimes I had these crazy visions of Siberian Tunes slam in the middle of Black Sabbath’s older discography, somewhere around the Paranoid era. Or just thereafter.

And this is one record that takes no prisoners. Albeit that I would have liked the typical clear voice vocals to hit a bit more front-center. Those kinda sit in the background of the mix when they should be in yer face. Also, the band sports a tendency to noodle about the soundscape with needlessly lengthy bouts of riffing and soloing. And that starts to disturb the peace somewhat in the second half where quality tunes become scarcer.

That said, let me stress again that this is mostly high-octane Stoner Doom that them Russian boys lobbed in our direction. Already Bad Seeds with its Dane-ish1) vocals and stellar solo leaves you with no doubt where this is going. Mask – for instance – is that one track with that juicy oomph, a slow-moving heap of doomy groove that roared out of our music machine way too many times. Makes me wanna break out that olde bag o’ weed every time I hear it.

The slightly grungy beat of Celebration harkens back to times when steamy music halls and teen spirits were all the rage. In a typical doom manner, mind you, but – boy – this one here got my internal wayback machine running overtime. And whoever said that Without God could not manage a bout of psychedelic speed, right?

Now, Song of a Stone comes in second on Siberian Tunes. Where the aforementioned Mask was something that Crypt Sermon never thought of, this track here made our day. The wah-wah filled solos, the stately riffs, and – wait for it – a bit of an excursion into prog’s delights had our minds wandering off.

Unfortunately, where there is light, you’ll find darkness. I often deplore the uncanny length of a record and this one is no different. It does unfortunately contain a few duds in a relatively short tracklist. Not a Care, for instance, would be one of those that could have easily been dismissed from the tracklist. Just sayin’.

Ultimately, however, Siberian Tunes: Purple Clouds delivers Doom Metal just the way we crave it. And Without God turned out to be one of those rare bands fully worth its doomy salt. They indeed planted their stakes firmly where Doom Metal dwells and let everybody know about it. A juicy stream of well-balanced, sludgy, slightly psychedelic, stoner-infused sorrow.

Take heed, they will be going places.

It might sound strange, but I think the album that really sold doom metal to me was The Devil You Know from the Dio-led version of Black Sabbath briefly known as Heaven & Hell. I was a relatively new metal fan when that album came out in 2009, and I hadn’t yet tasted the depressing goodness of Candlemass or Solitude Aeturnus. But I knew Sabbath, and I knew Dio, making Heaven & Hell a must-listen for me. Being more accustomed to the faster genres at the time, I was blown away at just how sinister slow heavy metal music could be, and I played that record over and over in the garbage truck I was driving back then. In fact, I even blew out one of the speakers in said truck when the first big Iommi chords dropped after the soft intro to “Bible Black.” All of that to say, while I often forget that I love this style, a couple of times a year, an album comes along to stoke the dormant flame of doom in my heart. This is one of those albums.

Hailing from Russia, Without God formed back in 2008 and have released a pair of full-lengths, the last coming out in 2014. Reemerging in 2021, the band have already released a nice little EP entitled Siberian Tunes: The Green Light and have made the interesting choice to immediately follow it with related LP Siberian Tunes: Purple Clouds. Without God play a big, burly style of doom metal that manages to include a pretty large range of influences. Sabbath, Candlemass, Kyuss, Pentagram, Crowbar, Alice in Chains — I hear all of these among Purple Clouds‘ varied setlist, and the band have managed to blend it all into a cohesive sound.

The record kicks off with one of its most powerful tracks, “Bad Seeds.” The song’s main riff is monolithic goodness, and the verses drop into foreboding Candlemass territory. The tortured vocals of guitarist and frontman Anton hover above the music like Johan Längquist’s did on Epicus Doomicus Metallicus, and his solo near the end of the song is just pure stoner/doom goodness. “Escape” follows and dials things down to a sludgy crawl, and “Celebration” blasts into groovier and bluesier territory. The latter really reminds me — from the vocals, to the riffs and lead technique — of Victor Griffin’s (ex-Pentagram) work in his Place of Skulls project, and that’s always a good thing in my book. “Mask” is an absolute bulldozer of a track, its sludgy crawl not leaving an ounce of hope to be found in its wake. For the epic doom purists, “Song of the Stone” sounds like it could have come straight off of a Candlemass classic or off of Crypt Sermon‘s stellar debut.

There are a couple of issues, but they are minor. The band tends to lean into their influences pretty strongly, and sometimes I forgot I wasn’t actually listening to Alice in Chains (“Mask”) or Candlemass (“Song of the Stone”), etc. But when songs are as strong as these are, a bit of mimicry is easily forgivable. A couple of these tracks (“Mask” and “Not a Care”) could stand to be trimmed by a minute or so to tighten the record up, but once again, they’re strong enough to allow for a riff to be repeated a time or two too many. Anton wins VIP honors for his powerfully authentic vocals and guitar wizardry. His riffs are gargantuan, and his leads are packed with feeling — and both are helped in no small part by the record’s organic production. Each song has something great to offer, but “Bad Seeds,” “Celebration,” “Mask,” and “Song of the Stone” are particularly righteous.

Forget what you’ve heard about Russian erection interference because the grooving riffs on Siberian Tunes: Purple Clouds have aroused my doommember and left me satisfied and smiling. Without God have pole-vaulted themselves onto my doom band watchlist, and I hope I don’t have to wait another seven years to hear what they do next.

I'm in the fortunate position where I receive lots of promotional material. Some are really nice surprises, others tend to be put on the back burner as they just don't suit the kind of music I feature on the Podcast. There are a few however that make the heart skip when you see the name of the band featured in the promo. The email I received featuring a new release from Without God made me break out into a sweat. I've followed these Russian guys for years and eagerly snapped up every album and EP they've produced and never been disappointed by any of them.
So, is 'Siberian Tunes: The Green Light' any different? That's a big no! It's excellent as always. Four tracks of psych tinged stoner doom, slightly more polished than what has gone before but no less heavy. Copious amounts of sludge is still apparent, however the added metallic crunch to the riffs add a potency that manages to tarnish the extra polish which is further scarred by the excellent, slightly acidic lead work that manifests itself throughout this album. One of the aspects of Russian metal I've noticed over the years is the propensity for the vocal delivery to be on the harsh side but this isn't the case with Without God, instead, vocals on 'Siberian Tunes: The Green Light' gel perfectly with the stoner undertones of this E.P.