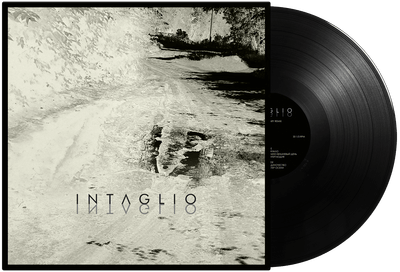 A reimagined version of the self-titled debut "Intaglio" album originally released in 2005. The new version contains parts and sounds that were not included in the original version of the album, which is now in their place as originally intended. Every second of all the original source tracks underwent restoration and processing using top-class digital and analog equipment. Moreover, for the new version of the album, all drum parts were live recorded, without the use of triggering and sampling technologies, which is very rare nowadays. The album was restored and remixed by Evgeny Semenov (When Nothing Remains, Woe Unto Me, Sorrowful Land) at Slow Burn Studio, mastering was performed by Mika Jussila (Shape Of Despair, Isole, Unholy, Moonspell) at Finnvox Studios.

An album that helped kick-start the Russian extreme Doom scene in the early 2000's - what's not to like about Intaglio's debut seeing a re-release?

If you know your Russian Doom history, Intaglio ('a design incised or engraved into a material') - for all their extended period of silence since the emergence of this single full-length debut in its original form in 2005 - are actually one of the heavy hitters in that scene. Not, perhaps, for their musical legacy, per se, but because this was a very young-looking Evgeney Semenov's band, and - along with his friends in Океан Печали (Ocean Of Sorrow) and Екклесиаст (Ecclesiast) - was part of the 2005 trinity of albums that provoked him to launch Solitude Productions as a vehicle for their wider release.

Now, you obviously don't need me to spell out the influence and reach Solitude (plus sub-labels BadMoodMan, Slow Burn and Art Of Silence) have subsequently had on spreading Russian - and, later, more worldwide - Doom and Doom-related acts throughout the underground. Suffice it to say that they've been one of the major, and most dedicated, players within this particular niche for quite some years - so there's really nothing wrong with revisiting what was SP.002, back in the day,and seeing where that stands in contemporary terms, in its current form.

I'm going to grumble a little to begin with - having paid top dollar for one of the limited 100 edition clear/black marbled vinyls, I was a little disappointed when my local postie handed me a wet, bent and somewhat foxed copy of the LP in a cheapskate single-layer cardboard mailer. Not necessarily Solitude's fault, as I believe the shipping was handled by a third party in Poland, but nonetheless a mild irritation. Ah well, it's far from the first creased album cover I've owned, and I doubt it'll be the last; still, as an observation for anyone dealing in vinyl, I'd rather pay a little extra for postage if it means not skimping on the protective packaging...

And, speaking of packaging in general, it's all a little basic - no insert, and minimal information on the back of the cover. My original CD copy came with a booklet including all the lyrics, some extra artwork and more information about the band and the recording - though it could be argued that since it was all printed in Russian, it didn't leave me any the wiser for having it. Even so, given the effort that has gone into resurrecting the release, it'd be nice for it to have something more of a physical presence.

Be that as it may, the more crucial side of any album is obviously the music that you're getting, not the sleeve it comes in, and this is where the rework of 'Intaglio' shows its merits. There's a slight structural change, with a reshuffle of the outro section of the original 'Wind Of Autumn' to become the separate 'Interlude', and a little trimming of the remainder. Aside from that, the effort has really gone into creating a fuller, more separated soundstage, amped up a little from the earlier versions.

It's fair to say that Intaglio were never the heaviest or most of crushing of Funeral/Death/Doom bands, and sailed closer to the atmospheric Death/Doom end of that spectrum than most. To an extent, that was a little submerged in the early '00s production and technology: here it is made very plain, and, indeed, integral to the airier mix. It perhaps doesn't make the album any more groundbreaking than it was in 2005, never mind 2020, but it does offer a clearer vision of exactly what Intaglio were aiming for in their compositions.

So, should you want this? I'm tempted to say 'yes', regardless of whether you have the original version or not. There's no doubt that Solitude, and subsequent Russian labels, have done an enormous amount to shape and promote the extreme Doom scene, whilst having to play catch-up against a 10 - 15 year lag compared to the rest of Europe. Which makes both the 2005 CD, as a statement of intent, and this revised version, as a retrospective articulation of what they really wanted to create, equally valuable glimpses into that history, with slightly different merits and focuses of their own. Deliberately emphasised, I suspect, by the way the cover art for the two versions are exact inversions of each other, trading the largely black monochromes of 2005 for a largely white palette in 2020.

In a way, I'm over-marking this, as a result. On purely musical terms, compared to contemporaries both then and now, there isn't anything unique you could really draw from 'Intaglio': it's well-executed, but on familiar ground. In terms of how it helped inspire one of the more productive underground sub- genres of this millennium, it's something of a landmark, and a valuable window into where we are now. But if you really have no interest in anything other than the audio impact, and don't particularly care about the history or shaping of Doom, fair enough - think of it as more like a 7.5 score in that context. I consider it a lot more important than that, in ways nobody could have foreseen back when it was first launched, and I'm content to consider it an essential release on those grounds.

The rerelease of 2005’s self titled album from Russian funeral doom band Intaglio brings what may be a lost classic back to life. Solitude Productions and Weird Truth Productions have collaborated to remaster this, restoring parts missed from the original release and bring one of Russia’s most influential records back to life. It is out now.

I’ve never heard the original version of this album, full disclosure, so the bits and pieces that have changed will not be very obvious to me. The cold tones of ‘The Beginning’ set us up nicely for the type of soul smothering heaviness to come. It is bleak, isolated and conveys a sense of doom incarnate using a simple clean melody. This lonely coldness just about prepares you for the monolithic chasm torn open by the riffs of ‘Dark Cherry Day’, a granite beast of funeral doom majesty. Beastial roars echo from the deep, while cavernous riffs cascade around you. Hell, even the ‘Interlude’ feels like an epic of the genre and it is only four minutes. It is sandwiched between the aforementioned ‘Dark Cherry Day’ and the titanic ‘Solitude’, a song that really struggles to contain the vast misery held within.

Closing with the delicate swelling crush of ‘Wind of Autumn’, ‘Intaglio’ may have felt lost for 15 years, but its sound remains timeless. In a year like 2020, the encapsulation of the isolation and empty bleakness of life is something some of us look for in order to get through this. Intaglio manages to hold this feeling tightly, and having followed a bit of the Russian doom scene over the years I can see the tendrils of this mighty record slithering throughout. Beautiful.

On the 15th of October, 2005, Solitude Productions released the self-titled debut album of the Russian band Intaglio (also known as Инталия). The album made a deep impact, not only because Intaglio were one of the earlier pioneers of funeral doom in their homeland but also because the music created such a powerful and memorable amalgam of crushing weight, desolate atmosphere, and profound melody.

It is thus entirely fitting that on October 15 of this year, on the album’s 15th anniversary, Solitude Productions and Weird Truth Productions will be releasing a very special “reimagined” edition of the album. As they explain: “All the original source audio tracks have undergone restoration and processing using top of the line digital and analog gear. In place of the original version’s programming, all drum parts have been live recorded without the use of any triggering or sampling technology. The album was restored and remixed by Evgeny Semyonov (When Nothing Remains, Woe Unto Me, Sorrowful Land) at Slow Burn Studio, and mastering was performed by Mika Jussila (Shape Of Despair, Isole, Unholy, Moonspell) at Finnvox Studios.”

The results of this careful work are stunning, and an experience that no fan of funeral doom should miss. We are very happy to give you the chance to experience it today through the premiere of a full stream.
https://www.youtube.com/watch?v=uNE6_jXzE2s

Of the five tracks on the album, two are shorter — “The Beginning”, which sets the stage at the outset, and “Interlude”. In between those two tracks comes the 13-minute “Dark Cherry Day” and following “Interlude” are two more tracks of significant length, “Solitude” and the closer, “Wind of Autumn”.

The striking clarity of the music’s ethereal aspects is announced immediately through “The Beginning”, a soulful and dreamlike piece that seems like a wistful reverie. And thus the contrast presented by the opening of “Dark Cherry Day” is staggering in its impact. The methodical drum blows sound like the detonation of bunker-busting bombs, while the sonic weight of the jagged-edge chords is immense. The slow, moaning melody channels a mixture of crushing grief and wrenching pain, a combination reflected in the range of harsh vocals. Yet the ethereal aspects of Intaglio’s sound shine through in the ring of crystalline guitars, whose effect is mesmerizing, though shadowed by a distant approaching storm.

There is a sense of struggle within the song, a beautiful, plaintive appeal in the chiming notes juxtaposed against the cold, oppressive, distorted clang of the riffs and the clobbering punishment of the drum and bass strikes. That juxtaposition is what makes the song so hauntingly seductive and yet so harrowing.

While one might expect the instrumental “Interlude” track to return to the timbre and sheen of “The Beginning”, it is instead another amalgam, a hybrid of gleaming lights and immense mountain crags drenched in shadow. It succeeds in deepening the tragic spell that the album has been casting, offering glimpses of hope but without forgetting the likelihood of hopelessness.

In the two long tracks that close the album, “Solitude” and “Wind of Autumn”, Intaglio continue working with the ingredients they so carefully and assuredly deployed in the preceding tracks, proceeding ahead in the steady and staggering march of great leviathans to their burial grounds. Celestial notes create visions of splendor just beyond reach, and shivering tones become the sounds of fear and weeping. The impact of the low-end chords and pavement-splitting drums remains devastating. And the reverberating melodies remain simple, but tremendously evocative and no less spellbinding.

This is funeral doom of a very high order, meticulously crafted and expertly executed, and successfully standing the test of 15 years’ time. It wears its heart on its sleeve, encapsulating a range of very human emotions confronting the frailty of life with haunting power, and also raising looming obsidian monuments of despair and death, too towering to climb and too massive to circumvent.