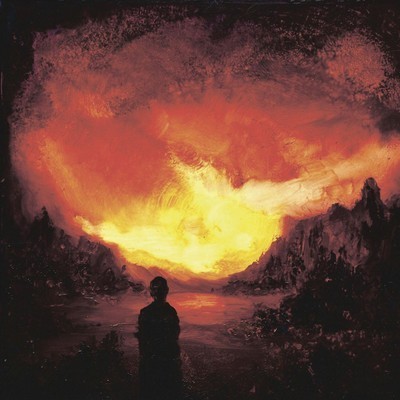 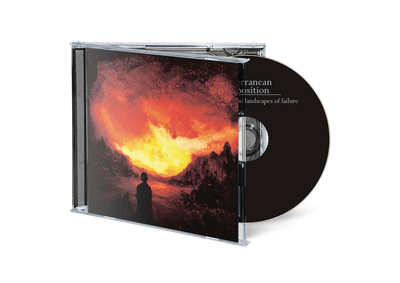 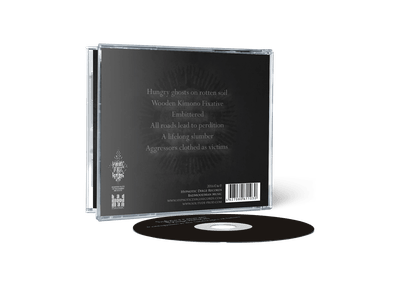 The second album by the Australian project established by Terry Vainoras, known for his participation in such sounding bands as Cryptal Darkness, InSomnius Dei and The Eternal. The debut album which attracted the attention by complex structure of the compositions, unusual for death doom metal, and the occasional use of the saxophone, was continued at the «Contagiuum And The Landscapes Of Failure», however, at a higher quality level. Long tracks filled with frequent tempo changes, different moods and emotional colors can cause interest not only among fans of death doom, but also among all who seek for diversity in heavy music, as the motto of the band is: "the dissonance, the atmosphere, the dynamics, the heaviness, the melody”.

Australian Subterranean Disposition display an alien gold vista that feels like a place where you grew up or visited, or possibly just dreamed, where something feels familiar, yet changed…
The once bustling and lively, yet also peaceful place on earth has lost its glow. The resources are depleted. All livelihoods has ceased. Emigration has deserted the area. The sound of children in the streets and adults at the grocery store and gas station has ebbed out.

Or maybe what once was an idyll has been built out, the river laid in a pipe, the lake drained and filled to set up a well of grey skyscrapers, while vegetation is paved and the big mysterious forest is reduced to a silly little park where heedless sweaty joggers hardly take notice of the few trees on their hasty route before shower, suit, tie and meeting with a group of investors.
Memories of former paradise is a thing of the past, and only a sense of emptiness prevails.

That’s the feeling that Contagiuum And The Landscapes Of Failure gives me. The Australians plays death-doom that discouragingly states that the physical monuments of childhood’s cheerful memories have received their death sentence. The swing from the branch is removed and the climbing-tree has been sawn down. As helpless witnesses to a development consisting of war, violence, terror, growing discord and fanaticism, the Australians does the best out of the situation, creating a stunning emotional work, where beautiful but sorely progressive melancholy dominate, while the most tearful violin from the Gothic land of sadness comes to the rescue.

That a straw eventually brakes the camel’s back is inevitable. That frustration at times takes over, and that furious fists shake in anger, is scarcely avoidable.

The album is a psychedelic journey amongst the memories ruins, or rather among ruined memories. In addition to recognizable elements from the biting grim legacy of British death/doom there is a somewhat unearthly mood of maladjustment and confusion through the five songs of 10-13 minutes each. The short intro not counted. The occasionally wailing vocal fits in, as it oozes of desperation and despair. It’s not impossible that the quaint home or holiday gem from the childhood has been bombed to smithereens in a fatal footnote of the history of war, but the atmospheres that I find, and convey on to you, are nevertheless just speculations. I haven’t read any of the lyrics.

Exactly what mental images the band has formed themselves, is therefore not easy to say, but it’s probably no cheerful thoughts. Their varied death/doom is rich in good music and strong moods, that sometimes drags my thoughts to Pink Floyd, while lovely use of saxophone and a little Hammond organ and acoustic spices certainly puts no damper on the mournful and emotional atmosphere.

A very beautiful and varied, well played and well sounding second album from Australian Subterranean Disposition.
Listen for yourself: Contagiuum And The Landscapes Of Failure.
Solitude Productions 02.10.2018, 11:08
Review
Iye Zine
7.6/10
29.06.2016

*Mild spoiler alert: a fraction over three minutes into this album, it was already becoming clear that there would be a sizeable number waiting at the end of this review. That just happens to be the time it takes to run through the delicately-introduced and dramatic instrumental introduction, and for the sublimely-crafted instrumental layers being fed into ‘Wooden Kimono Fixative’ to have built up guitar, drums, bass and introduce the first mellifluous notes of tenor sax. One of the most elegant and moving lead-ins I’ve heard in a long time.*

But I’m getting ahead of myself somewhat, there. You may already be familiar with the band Subterranean Disposition through the self-titled 2012 debut, or with project founder Terry Vainoras through any of his two-decade-spanning career with other bands such as Cryptal Darkness, InSomnius Dei and The Eternal. Nearly four years on from ‘Subterranean Disposition’, sophomore ‘Contagiuum and the Landscapes of Failure’ arrives courtesy of a joint release by Hypnotic Dirge Records and BadMoodMan Music, and wrapped in a dramatic cover painting by Coby O’brien.

The debut album established a melodic-experimental-ambient Death/Doom (well-encapsulated by the quoted motto “the dissonance, the atmosphere, the dynamics, the heaviness, the melody”), and plenty of recognisable elements from that have been taken forward into ‘Contagiuum…’: first and foremost, perhaps, the small number of lengthy compositions comprising the release – indicating that the thoughtful, evolving, multi-passage songwriting structures pioneered there have been retained largely intact. They’re based around much the same components, too: largely centred around guitar, with a mix of clean and growled male vocals, a smattering of keyboards, spot effects and spoken-word features, some (very welcome) sax, and guest female vocals, all combining with various shades of accord or contrast as each track unfolds. A strong improvement is to be found in the fully-accredited presence of Dan Nahum (Futility, Orphans Of Dusk, and many others) behind the drum kit, demonstrating that even the best programming available can’t compete with a quality percussionist. Other changes: the female vocals, this time, are the enigmatically haunting tones of Iranian-born Gelareh Pour (featured in an eerie ambient exploration during ‘Embittered’), and the sax is Terry’s own work, learned during the interim.

And what can I say, but that the various continuities and changes have resulted in a significantly more assured (I won’t say ‘mature’: given the extensive pre-Subterranean Disposition experience involved, the debut was hardly a novice work!) musical statement. ‘Contagiuum…’ successfully steps up, taking the inclusion of bold and experimental features that marked its predecessor, and completely integrating them into what are essentially genuine Prog Rock structures. By which I don’t mean album-length tracks full of Yes-like noodling: look more to the extreme ends of the genre, where bands like Van der Graaf Generator brought together every bit as much aggression, harshness and raw pain as the modern underground strives for. That’s the sweet spot which ‘Contagiuum…’ occupies: the dissonant, the unexpected and the unusual coexisting beautifully with the more prosaic and familiar core of Death/Doom values. Some deft steering ensures that, despite the variety of elements brought front and centre, the album maintains pace and meaning, without any of the individual moments diverting from either, or overstaying their welcome.

I’m not going to deconstruct much of the music here: there wouldn’t be a lot of value in pulling out a long list of individual moments and partial comparisons. But I will mention ‘All Roads Lead To Perdition’ – perhaps the most obvious bridge between the two albums – in a little more detail, as an example. Travelling from gentle, spidery guitar harmonics through a smoothly tantalising build-up to venomous passionate crescendo, from distortedly echoing half-spoken vocals to a section of melancholic strings, from soaring guitar lines to the creepy computerised ambience of the coda: the breadth and variety of the journey is vast, yet stays true to its semi-recurrent theme. You could level a salvo of band names at it – from Rush to Inborn Suffering, Ministry to The Slow Death – and they’d all give just a part of the picture of something that is emphatically its own creature.

I praised the craft and attention to detail of the debut: it’s a pleasure to note that has been maintained here. A great deal of work has gone into polishing every facet of the production: amongst many other highlights, the lush guitar tones are a deliciously evocative match to the emotions of the passages they run through – whether tracing a contemporary path, or harking back towards a more ’70s sound. The different movements are many and varied: ranging from such features as the by-turns rocking-out or languid saxophone, the interjection of uptempo snarling and blackened climaxes, or the wielding of ambient effects like the sinister crackle of electrical discharge concluding ‘A Lifelong Slumber’.

For all the complexities, though, it’s still a very accessible album: dark and punchy as the backbone can be, it still sits at the lighter and more melodic end of the Death/Doom spectrum – and, obviously, that’s further mellowed by some of the more boundary-pushing elements. Rewarding close attention and repeated listening with a plethora of subtle details, the hour’s running time is a longish but entirely worthwhile trip through some decidedly creative spaces. Those may turn out to be a little too artistic for everyone’s taste, but – as noted at the beginning – you should have a pretty clear idea whether it’s going to be your sort of thing within a few short minutes. It most definitely is mine and, without doubt, will be a name appearing on my end-of-year shortlist.