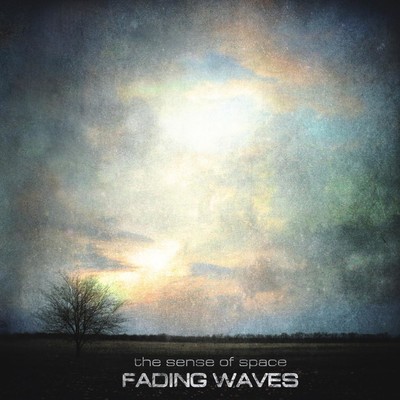 The first full-length album of Fading Waves presentsthe music of the band from a different side. The album includes five tracks filledwith air, senses of flight and endless space. "The Sense Of Space" consistsof experience which is hard to formulate or describe, it only can be felt, alsoby means of this album. The beautiful artworkof the CD perfectly corresponds to the atmosphere and emotions of the FadingWaves music, while perfect performance and mastering will suit even the most hard-to-pleaselisteners.

Fading Waves have already been covered on these pages a couple of years ago. It was in connection with the release of their Split CD together with Starchitect. Now, this atmospheric/post-metal/doom band/project (Originally one-man project, the work of Alexey Maximuk) from Russian Federation is back. The first-full length is entitled The Sense Of Space and it contains only five lengthy tracks.

The overall music of Fading Waves paint inner waves of modern man, tell about its sickness of being in mega polis crush. “Destroying The Time” is definitely the best out of these five tracks, being a drums-pushed epic track with a lot of guitar echo, swelling melodic lines and a great atmosphere. I wish the remaining songs had the same quality. Meanwhile this is unfortunately not the case. The only other track which has some potential is the following one named “Perforate The Sky”, mainly due to the additional sexy and addictive female vocals of Ms. Anastasia Aristova.

I also like the overall concept of the band, nice and modern production and decent song-writing. The only con is the repetitive nature of the remaining three songs and somehow very bleak and desolate cover artwork. For everything else, from writing the songs, thinking of the concept to the great production, he solely is responsible. If you heard their split with Starchitect, or you are happen to be a fan of Neurosis, Isis, Baroness, Cult Of Luna or Katatonia, this Fading Waves is ‘a must listen’.

Fading Waves is the brain child of Rostov-on-Don resident, Alexey Maximuk. Alexey’s first full-length, The Sense Of Space, sees him call upon call up a half dozen of his amazing friends and bang out a pretty cool initial offering that sees post-metal blended with a little pinch of both goth and doom for good measure.

Fading Waves, in addition to being the band name, is probably a good enough starting point to describe the music. Waves can be beautiful and serene, gently lapping at the shore. They can also swell, crash upon the shore with a subtle ferocity that can drag surfers to their death. Gnarly, brah.

The album starts off innocently enough with “Air” and “Flashes”, a nice, serene build up and some entrancing female vocals and continues along with lots of Explosions In The Sky style post-y developments. Clean guitar tones with reverb that slowly and gradually build in intensity.

Just as the songs ebb, flow, and grow, so does the album as a whole as with, say, Ulver’s Bergtatt. The album grows from tranquil water, light and clean with beautiful female vox to raging, stormy seas with growls, distortion-pedal aided post-riffs, and even some guitar solos.

By the time the album ends with “Through The Veins”, is almost surprising how far the album has come from the opening until close. Perhaps even more surprising how it escalated to that crescendo without any particular abrupt turns.

While the album was perhaps more enjoyable than I thought it would be (what, me with my “post-metal traumatic stress disorder” and all), ultimately it isn’t particular innovative in a very crowded field of acts. But I guess that is present in all genres of music, eh?

I first became aware of Russia’s Fading Waves when I heard their impressive contribution to Slowburn Records’ split-EP with Starchitect. With the band’s brainchild, Alexey Maximuk, working his magic, both behind the production desk and in front of it, it was his talent for songwriting that most stood out. His stark concept and bleak lyrics struck quite a chord with my own dark side. Of the seven tracks on show, most were short, sharp and yet, ultimately, incisive. So, when it came to the announcement of the band’s debut album, The Sense Of Space, it was trepidation that replaced my inital excitement when I noted there was to be only five tracks, with four of those over nine minutes in length. Could Maximuk stretch his songs that far and still achieve the same impact and clarity of vision?

Well, The Sense Of Space tries a bit of everything, opening gently with fluctuating ambient pop, before exploring the wilds of post-rock and into the chaotic worlds of progressive, doom and death metal. As the album progresses, you can hear the tracks rebounding off a series of different markers; influences that prove just how deeply Maximuk is affected by his own emotional response to music.

The elegaic introductory piece, “Air”, scuffs up the dust of Renfro, Hammock and Cloudkicker, whilst “Flashes” (featuring the distinct, lilting vocal of Anastasia Aristova wending its way around shifting patterns) marries Mono’s sense of drama to the ethereal melancholy of Katatonia. You can almost hear the gearbox grind as they yank the stick and find a progressive metal punch to match the roaring cries of Alexey Morgunov. It’s No Made Sense meets Russian Circles via Isis. Then, the foot comes back off the gas as “Perforate The Sky” and “Through The Veins” drift into view, gurning and posturing as they infliltrate the more driven realms of Pelican and The Ocean.

There’s a damaged quality to the way Morgunov’s screams have been set back in the mix, with the scaling, hollow electrics brought forward to leave the rest fighting for attention in the middle. Each instrument is given its own degree of dissonance which adds dimension, granting the music this fascinating spatial quality. Sadly, the songs themselves are far less of a fascination; development is there but, when it does occur, it’s at an agonisingly slow pace.

One oddity I wasn’t quite prepared for is the higgledy-piggledy nature of the album. Although the concept of “air, senses of flight and endless space” seems easy enough to comprehend, the implementation of it is far harder to slot into place. Each chapter here, every soundscape, seems to come from other stories, other concepts – call me ignorant, but I certainly struggled to accept The Sense Of Space as a single work of art – its more musical crazy paving! The songs also feel overly lengthy, grinding their way down blind alleys, scrambling frantically at sheer walls. Fading Waves are clearly adept at creating invasive music, music that’s emotionally-draining, but apparently struggle to maintain a decent level of consistency. So, whilst I’m delighted to say this album flies it’s flag with pride, and is still worth a listen, it’s definitely a step backwards. I fancy a return to those hit-and-run tactics they seem so good at.