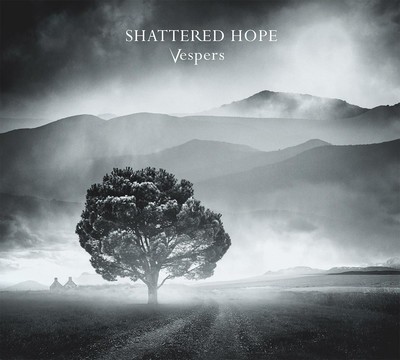 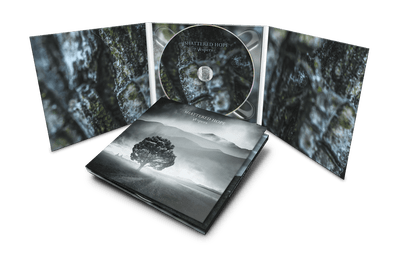 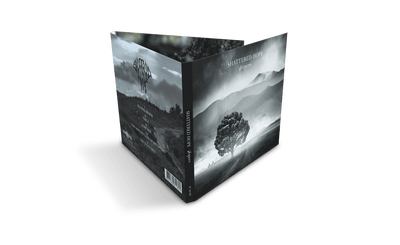 The Greek masters of atmospheric doom death metal are now back with a new, third full-length album aiming to surprise and conquer listeners once again. As usual, the musicians add new colors to their palette to demonstrate feelings opening up from a new angle. The shrouding with coldness Shattered Hope's novel work is a deep philosophical dialogue with eternity, expressed through deep texts hiding references to the classics, as well as through powerful crushing music performed with impeccable skill and sincerity. The first 100 copies of the album are released as a six-panel digipack with a superbly designed twelve-page booklet.

Tracklist:
1 In Cold Blood
2 Verge
3 Συριγμός
4 Towards The Land Of Deception
5 The Judas Tree

SHATTERED HOPE is a Funeral Doom/Death Metal band, formed in Athens, Greece in 2002. They were not able to get an album released until 2010, however. “Vespers” is the band’s third release, and contains five tracks. “In Cold Blood” leads off the album. It’s a 13-minute beast, opening with a heavy, dark riff that moves slowly. The vocals are harsh utterances…guttural at times. It breaks two minutes in, for a slow and ambient passage that is actually quite pretty, but also sinister at the same time. From that point, it rages with despair…with lead guitar and bass taking the melody, and the vocals become vile and raging. It ends very slowly, with accented guitar strikes.

“Verge” is 12-minutes in length, opening with a slightly hopeful tone in the guitar riff. Clean and harsh vocals are used here, giving the song some extra effects. It lumbers forward, complete with a guitar solo at one point. Following the solo, the vocals are extra harsh and lamenting. As it closes, the screams heighten as does your sense of the world soon to be ending. “Συριγμός” opens with clean guitar notes and the tone is very solemn. Drums roll in quietly, and some background ambiance begins to build. The vocals are at first spoken words…I can’t quite make them out but they foretell the doom that is about to come. The main riff drops and the vocals are both harsh and with chanted cleans at the same time. Darkness takes root and does not let you out of its grip.

“Towards the Land of Deception” opens with some background ambiance that is nefarious and evil. Light strings echo in the darkness. The main riff comes in slow, and the vocals are low guttural utterances that sound like they come from the bowels of the earth below. The strings continue on, seeming out of place, like they play as you watch the Chernobyl disaster unfold in front of your eyes. “The Judas Tree” closes the album, and it’s a 15-minute opus. Seguing from the previous track, there is a long fade-in of doleful strings leading to the main riff around the two-minute mark. The vocals are horridly harsh, and landscape gets more barren as the song continues. Some clean guitars and vocals come into play, offering just a glimmer of hope, that is soon dashed by the vile nature of the vocals to come. The guitars become thicker after the half-way mark, dragging you down into the swamp of your fate.

Overall, the depth of despair here was noteworthy. Through just five lengthy tracks, the band was able to portray your doom as both things that you can see and things that you can only begin to comprehend. This is the kind of doom that seeps into your very soul, and slowly, over years, blackens your mind and your heart as you become totally numb to the outside world and retreat within yourself completely. The end is near, and “Vespers” brings that feeling with a burning cold.