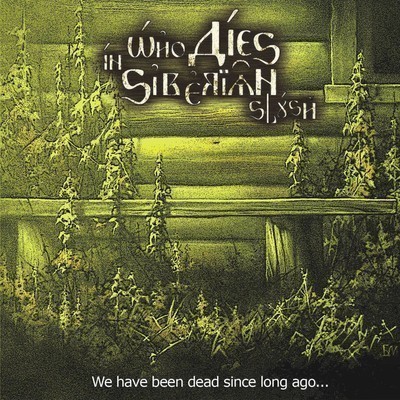 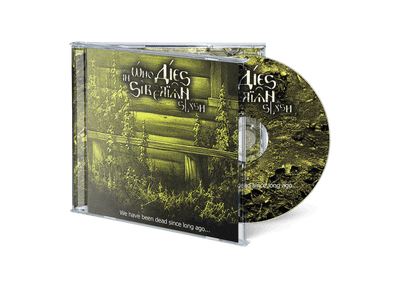 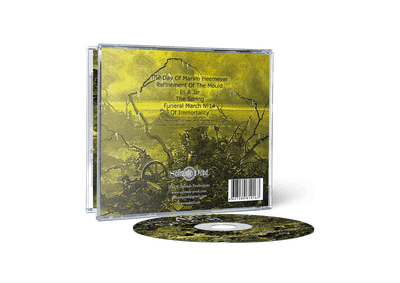 The long-awaited release by the vanguard of Solitude Prod., the second full-length album from Moscow band Who Dies In Siberian Slush! In this work the Russian masters of funeral doom death follow their own way of music composition and sound production showing their potential from alternative side. Like «Bitterness Of The Years That Are Lost», the new album of WDISS contains a lot of funeral doom elements, however, the basic style is more close to doom death metal. At the same time «We Have Been Dead Since Long Ago» features diverse stylistic inclusions and variations. Icy massifs of guitar riffs framed by an outstanding growl, irrepressible fire of solo guitar parties, and piercing cold rain coming from heaven through the sound of funeral march are waiting for the listener. The album is recorded and mastered at the Primordial Studio (Comatose Vigil, Abstract Spirit, Revelations of Rain ). The lyrical concept of the album is based on different tragic events with sorrowful epilogues and continues the philosophic tradition started at the previous band works. Despite the contradictoriness and the irregularity of the album, it is highly recommended to fans of Ataraxie, Profetus, Loss and My Shameful style.

“The quartet is playing doomy, melancholic Death/Funeral Doom with catchy guitars and the genre typical growls. However, the CD unfortunately doesn't stick out from the vast mass of artists in this field.”

I remember their first ever release on Solitude Productions, I wasn't overtly pleased with it but it wasn't terrible. This CD is a marked improvement in so many ways. Starting off, I learned a bit of U.S. history with 'The Day Of Marvin Heemeyer,' a man who armored a bulldozer and drove it right through the streets here in the U.S. It's a pretty heavy tune and one of the best songs W.D.I.S.S ever wrote. The vocal samples E.S. pulled up for this one are top notch! It's your slow, ominous and doomy track, but there are some faster
passages as well, probably some of the fastest instrumentation you will hear on this disc. Followup 'Refinement Of The Mould' starts off with some nice, haunting piano notes, and I definitely liked the dirgey atmosphere. Still, some of the instrumentation more towards the end of the song could have been fleshed out better; namely some of the vocals and instrumentation mixture. And a lead solo in here, that was rather unexpected. For it's 9 minutes in length it's got quite a few structures to play with. I will say this is probably the weakest cut on the record. I loved the doomy trumpet sounds on the followup 'In
A Jar,' which reminds me of Colosseum, adding some piano notes and of course the deep death metal styled vocals. There's lots of solo instrumentation on these tracks, preferring to not over utilize vocal work. Followup cut 'The Spring' is a very enjoyable track, though the opening "toybox" notes were kind of odd. This particular cut sports some of WDISS's best guitar work on the record I must say. And another lead solo, something you definitely don't hear a lot of in doom metal. 'Funeral March No. 14' sounds a bit like what Candlemass did with 'Marche Funebre,' and I questioned the 7 minutes in length this track
runs on, especially being an instrumental. Not a whole lot of variety present on this one either. And CD closer 'Of Immortality' didn't overtly impress me, though the slow and heavy riffs aren't bad, and the mournful instrumentation picks up in places. Once again, the culprit seems to be the passages where the vocals interact with the instrumentation. Overall, it's definitely a step up from the debut, and after reading the interview it seems like E.S. was going for more of a rather uncomfortable vibe on some of the songwriting. Still, there's definitely reason to check it out, I'd say. Listen to the soundfiles and make up your own mind.
Solitude Productions 31.10.2013, 18:40
Review
Doom-Metal.com
01.04.2013

It seems to me that Funeral Doom Metal was once a style of music that was most popular in Finland. Finnish bands Thergothon and Skepticism originated the style, while the likes of Shape of Despair and Colosseum modernized the genre with a more atmospheric approach. Yet more recently, bands that also execute this kind of slow and extreme metal are becoming more common in Russia. While Ea, Comatose Vigil, and Abstract Spirit are more prime examples, Who Dies in Siberian Slush has remained in obscurity. Their first album, ’Bitterness of the Years that are Lost’, was one of many albums released by Solitude Productions that was overshadowed by the less obscure bands that also distributed albums through the label. Since many more well-known Doom Metal bands released fantastic albums this past year, the band’s 2012 sophomore, ’We Have Been Dead Since Long Ago’, seems to be attracting the same scant amount of attention as their first.

The music on ’We Have Been Dead Since Long Ago’ is fairly basic. Dissonant and ugly guitar melodies are joined with simple drumming and the typical deep growls. While the first album was strictly funereal, the music focuses on sounding raw and dabbles more in Death/Doom Metal on this new output. Although the rhythm mostly sticks to the band’s roots in being very sluggish and lethargic, there is also a decent amount of mid-tempo and speedy sections to add variation and avoid being too repetitive. There are even some melodic passages that lighten the dire mood, particularly on ‘Refinement of the Mould’ and ‘In a Jar’, which bring to mind the early works of Funeral, as well as Mournful Congregation. Occasionally, the band implements pianos, synthesizers, and even trumpets (well, a trumpet setting on the keyboard, taking akin to Abstract Spirit) to allow the songs to sound more majestic at times.

While I would say the guitar melodies are the real stand-out of the album, I feel as if that’s all that stands out on ’We Have Been Dead Since Long Ago’ whatsoever. Since this band does play a style as minimal as Funeral Doom, it can be expected that the drumming will only be but so technical and that the vocals will be deep grunts, which are typical characteristics for this kind of music. Yet, the execution of these two elements makes it difficult to differentiate Who Dies in Siberian Slush from the plethora of similar bands that are active now. In particular, I find that the band shares a lot of characteristics with My Shameful, not only in the vocals and pacing of the music, but in the suffocating and grotesque atmosphere as well. While the performance is good nonetheless, I sense a real lack of identity. However, since I have found it’s common for more modern Doom Metal bands to develop uniqueness over time, perhaps Who Dies in Siberian Slush will be able to create a sound that is more their own in the future. Nevertheless, those who enjoy the less atmospheric side of Funeral Doom and Death/Doom should look into this, especially if they enjoy Ataraxie and Funeralium, as well as the aforementioned My Shameful and Abstract Spirit.

Doom Metal has become more and more popular in Russia recently and both - mixed with Death Metal and shamelessly phlegmatic; it is being created quite well. As I haven’t listened to the first works of this band yet, I can’t declare that these dying in the slush of Siberia Russians have never been originally provoking or especially creative, but the last opus could be inscribed on the list of those passable albums.
Indeed, the music here is shamelessly simple, as it often works in the case of Funeral Doom - a permanent repetition involves and doesn’t allow us to remain apathetic, but in this respect it is possible to catch the state that is encoded in the title of the album just rarely or in passing. The simplicity doesn’t help in any way; it just repels and induces boredom because those obviously predictable and unwanted accents just merely don’t allow us to empathize. For instance, they insert some piano motifs; in the beginning it sounds like an unnecessary appendix just for clogging, but when it is repeated at the end of the song, it reflects the sounds of guitars and even acts like an antidepressant which is really irrelevant in such music. For this reason you are right away brought to the reality - “what the hell am I listening to?”. Well, on the contrary, the guitar solos are very mesmerizing and involving, but again, they are coming from Heavy Metal or something like that - they do little for the general mood of the song. However, that simplicity has some folksy greatness, so Russian and based on sincerity; and that is felt during the whole record long more or less. Though not every single song affects the listener as it should affect by no means, but the efforts and methods are significant (and there is no cheap imposture by using effects, sweet melodies or an especially fancy technique, which contains nothing). Even the example of piano perhaps was irrelevant, but it is used really rationally. Exactly that spirit of the Russians possibly rescues the whole album - here you won’t find any new or particularly technical material, you will obtain quite boring stuff, which even wins with that monotony because the band manages not only to not lose itself in it, but also to use it for its aims...

Who Dies in Siberian Slush (WDiSS) is a Death/Doom Metal band from Russia. Now this is something you may have heard many times before. Death/Doom, Doom, Funeral Doom, it’s too common. What makes this band different from the ones out there? Does anything? The answer is YES.

It’s not too easily apparent but once you commit to it or give it more than a passing chance, you will easily see why – the richness is amazing. The richness is akin to Morgion’s epic album ‘Solinari’ and WDiSS re-creates it using the template of Ataraxie, taking cues from My Dying Bride. What this description leaves out is the masterful integration of the said styles into something seamless, rich in emotional depth and sombre atmosphere.

This has had my attention occupied for the most part of this week when I should have reviewed this album days back. Every time I sit down to listen to it, I keep absorbing parts of this and notice something I hadn’t noticed before. This is when at the face of it, nothing may seem out of the ordinary. This is what makes this band special. This is what makes it worth reviewing for me and for you, worth your money and a place in your collection. The gold disc and sublime packaging as always by Solitude Productions makes it worth the effort.

‘We Have Been Dead Since Long Ago…’ is a masterful album, a myriad of emotions eloquently expressed while staying true to the Doom/Death Metal style, which is more than what can be said about most such bands these days.