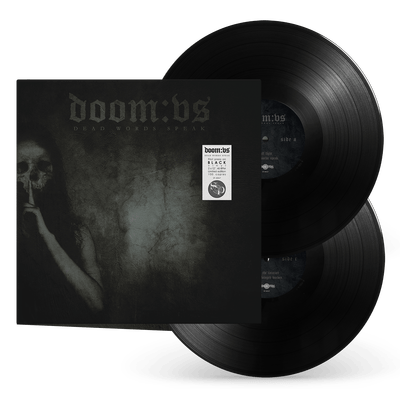 Re-issue of the second album of cult doom metal band Doom:VS "Dead Words Speak". This album requires no additional comments, because during ten years since the first edition, it has been highly appreciated by fans and critics, becoming one of the genre masterpieces. It is worth noting that the first edition was quickly sold out long time ago and has become a rarity, however, now the collectors have a unique chance to add this record to their collections.

Doom:VS is not a new name in the Doom Metal industry. Despite having only released three full-length albums, this band is well-known on the Funeral Doom 'circuit', if you will. It’s a solo project of Johan from Draconian that has plenty of fans. What I’ll be reviewing today is not actually a new release, per se, but the re-release of the band’s 2008 album 'Dead Words Speak'.

What I like about Doom:VS is that it’s one of those bands that effortlessly commands its music. The moment this album starts, you can only sit in awe of the majestic music that plays. Everything feels very measured and precise, not to mention technically superb. I’m not a huge fan of clean vocals in this type of music but Doom:VS fuses them excellently with the powerful Funeral Doom so I really can’t complain!

Doom:VS doesn’t solely use clean vocals on this release, though - far from it. If anything, I’d say that the growled vocals are more prevalent, and there’s even the odd vocal sampling in the mixer too. Interestingly, it doesn’t seem to matter which approach Doom:VS takes because it’s executed so well that it always sounds phenomenal, really. The production on 'Dead Words Speak' and the focus that has gone into the song structures is what really makes this album shine though. Nothing feels rushed, and no corners have been cut either. It’s masterful, really.

There’s even a moment in the middle of one of the tracks where there’s a real potential for the music to become very cringeworthy. Basically, there are short rhymes in a short space of time and normally, that’d be something that failed miserably in my book but not here. Doom:VS know how to execute songs, and how to produce very commanding compositions.

In general, the music is slow and pondering Funeral Doom. I’d argue the case that Doom:VS executes the same measure of control over its music as bands like fellow Scandinavian band Nortt, for example, although the musical styles are rather different. The best way I can describe listening to music like this is that you feel as if you’re part of it rather than simply listening to it, and that is not a very common gift. My sole crib would have to be that I think there should be more on this album, although that’s probably more greed than the fault of the band but you won’t hear any apologies from me for being greedy!

I don’t have a lot else to say about 'Dead Words Speak', to be honest. I’d always hesitate to use the word ‘perfection’ in this business, particularly with so many people ready to leap upon you for saying anything that they may disagree with! However, this album is as close to perfection as it gets in Doom Metal, and that’s coming from someone who prefers much harsher Funeral Doom than this emotional rollercoaster of a ride. This masterful work from Johan has left me with next to nothing to complain about. Even the digipack on the release is very slick!