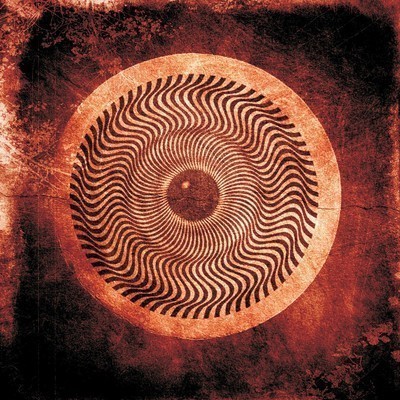 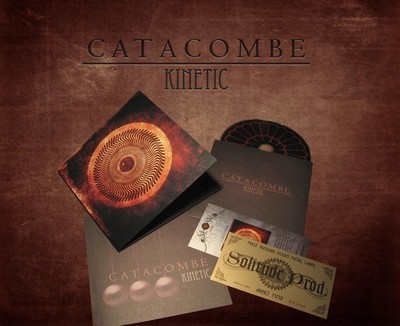 Interesting act coming from Portugal, Catacombe is a four piece band without any vocalist which I’m sure will be able to capture your attention and your likes after you listen to their new album ‘Kinetic’, out on Slow Burn Records.
Being an instrumental band, Catacombe obviously focus their attention on melodies and atmospheres inside each song, not to compensate the lack of a singer, but moreover to deliver something very intimate, something that can virtually be developed into whatever shape or form, since there are not any kind of stylistic boundaries for such a band like Catacombe.
‘Kinetic’ is one of those albums that can be listened 2 or 3 times in a row without ever be boring at all since there are so many variations in the usual song structures: modern metal, echoes of jazz, raw post-rock accelerations, eerie guitar arpeggios, electronic samples, all these elements and many more that’s quite impossible to list are wisely blend together by Sérgio Soares (bass), Eduardo Costa (guitars), Paulo Kwane (drums) and Cristiano Moreira (keyboards and samples).
The song “Memoirs (extended)” is the one that best can introduce this band to a new audience for its huge lenght (over 10 mins) and because it sums up all the features of Catacombe’s sound, something very amorphous in the exact meaning of the term (meaning that can get every wanted shape).
As a footnote I consider ‘Kinetic’ one of the most interesting release of the last months, and I definitely hope to hear news about this band as soon as possible.
Slow Burn Records 27.06.2018, 09:30
Review
Kronosmortus
5/10
08.02.2011

If it comes to instrumental music I prefer Blotted Science or Spastik Ink. It is weak even in the post rock/metal scene, more to be defined as background music.

Say what? Come again? You really mean it? I can’t believe you just said that. More post Metal/Rock music involving musicians occasional staring down at their footwear? You lie sir. Heavy riffing combined with melodic riffing, a lot of acoustic work, ambient keyboards, a solemn and sombre atmosphere. I’m at a loss, what to say. If you like this type of music you’ll probably like Cataccombe, but on the other hand what do I know? I don’t listen to the genre so I can’t really tell you.

The problem with most post-rock/metal is that it is music of compromise. It wants to be heavy yet melodic. That is possible, but both conditions rarely occur together. (Slaughter of the Soul is a rare example.) Usually melodic metal bands mine a wishy-washy middle, catering to the limitations of listeners weaned on Western pop music.

The problem with most melodic bands is that they don’t know to use melody. They ghettoize themselves into genres, and they wield Western music’s 12 notes with little ingenuity. A sophisticated body of thought has arisen over centuries in order to maximize the mileage of those 12 notes. Bands don’t need to be avant-garde serialists to be interesting; Miles Davis did well with a limited modal vocabulary. But he knew what he was doing. Most melodic bands don’t, so they end up running laps around the same minor and major scales.

Catacombe solves these problems. I reviewed this Portuguese act’s debut two years ago. Since then, it has acquired a human drummer and a surer hand. Kinetic (Slow Burn, 2010) is a heartbreaking work of staggering prettiness, and I mean those words in the best way.

This record does not try to be two things at once. It only wants to be pretty. It has no pretensions about growing a beard and trying to be heavy. Occasionally it does step on the fuzz pedal, but only for effect – to turn the screws on the heartstrings. Most of the time, clean tones form webs of conversation and counterpoint. These dewdrops of melody are so gorgeous, it’s almost obscene.

Isis’ last two records went for a similar vibe but failed, due to the abovementioned problems. They got sidetracked by concerns of heaviness, and they didn’t have the finesse to make their melodies sing. My music theory is weak, but from being able to sit through these album repeatedly – for weeks, in fact – without getting bored, I know that Catacombe have that finesse. Their melodies sing. Through harmony and rhythm, tension and release is constantly occurring. Subtle forces are at work to make prosaic ingredients poetic.

A good example is “Anna-Liisa”. The images in its video above come from the Finnish silent film of the same name. (See story here.) This record has no lyrics, so it has no overt narrative. Instead, it’s a journey, a world, a good place to be for an hour. I’ve spent much time there, and you can, too. Download Kinetic for free here, and buy it here.

If we look with a little attention to the Portuguese metal scene, it becomes obvious that, over recent years, the number of bands/projects has increased dramatically and that have a certain exposure, at least at home with regular concerts that are organized and ease of recording that exists today, on the other hand, this myriad of bands, there is a significant lack of works that fall within the sphere in which they move Catacombe: Post Rock/Metal. Discussions and polemics aside, the fact is that the decade just ended was indelibly marked by this kind of sound, much to blame (in a good way, of course!) names like Isis, Pelican, Neurosis, Explosions In The Sky or Mono before reaching a point rapidly approaching saturation, and where, in future, only quality will prevail or else who knew the pulse walk your way.

The northerners Catacombe will be one of the few portuguese examples to embark on this kind of sounds, and after the release of their debut recording, the EP “Memoirs” in 2008, caused some buzz, not only by the quality of his songs, but also by sharing the stage with names like Minsk or Nadja; symptomatic effect, therefore.

What initially was a solo project of Peter Sobast, quickly evolved into the band format and this is the same format that presents today “Kinetic” (after all be under the baton of Sobast), his first long-duration, composed by seven themes that are no more than a shred of emotion, a painting on a canvas bare, we will by carrying different environments, each with its color, sometimes more sweet and innocent, sometimes more harsh. Basically, what we have here is the step following the premiere, filled with themes that only with very good quality; news on music here not plentiful, but not always the good disks to demarcate the other for originality, but because they are … good! The influences are still there, more or less blurred, depending on the artwork takes shape, under the command palette of six colors in the hands of Sobast. “Anna-Liisa”, “Epic Ride” or “Mockba” will be the best strokes in this beautiful picture, abstract, but when emotions are almost palpable.
Slow Burn Records 27.06.2018, 09:28
Review
Hellride Music
27.12.2010

This is yet another debut and again the music flows and breathes through great intricate melodic pieces and a balance of heavy and spatial to keep it fresh and unique. I really am impressed with the Solitude Productions/BadMoodMan/Slowburn Records family because they keep finding ways to make genres that can get very stale very quickly and keep me surprised by bringing some global talent to the forefront. Each song is unpredictable in its structure and that helps to keep it moving and swirling around your head. The riffs cascade like a tide against a rocky shoreline and there’s a bit of Isis here in that respect, but all in all this act along with A Cold Dead Body really push some boundaries and I can’t just push them off to the side as I have with too many in this style.

Aside from a very small handful of acts in this style, past the age of 16 I really don’t buy shoegaze style stuff too often and with a full stock of Isis, Mouth of the Architect and a few solid others, I never bought into that style even recently, so for me to say that something like this is good should convince a few of you to listen and investigate for yourselves.

Both are mastered by James Plotkin so that’s another plus!!!!