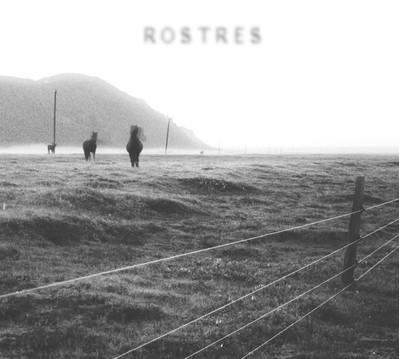 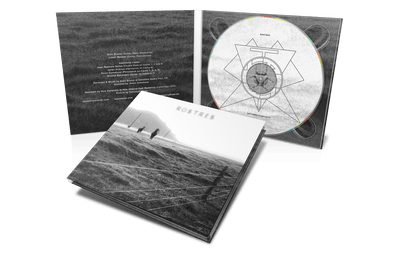 I have not had to translate French words with music since Rush’s “Circumstances.” Rostres is a duo from France and if Google translate did not fail me, rostres means “rostrum,” which is a platform for someone to give an important speech. The French band is an instrumental project built off members of hardcore band Dead Like Me. The small studio project soon grew into a full-fledged effort from the duo who secured an album deal with four record companies to distribute the album across Europe. Les Corps Flottants, or floating bodies, became the debut album from the group. The record focuses on a sludge-stoner vibe that lets the music do all of the talking.

Rostres consists of Brunet Alain, who handles the guitars, bass, and keyboards and Mermin Lionel who leads the percussion. The guitars are really what shine the most on this release. The keyboards presence is only felt slightly and do not disrupt the music at all. The drumming is on point and fits every track accordingly.

Les Corps Flottants opens with the title track, “Les Corps Flottatnts,” and it sets the mood of the album well. It is a technical and progressive track that goes on for eight minutes. Only one of the seven songs on this release is less than five minutes in length. The long runtime on the tracks give them each a distinct flavor and feel while still maintaining that sludge sound. The imagery depicted merely by the music itself is chilling and ominous. The shortest song, “118,” gives a dark gaze into whatever is happening on the album cover. The following track, “Glaire,” is my favorite song on the album. The heavy riffs that open the song are pleasant to listen to every time. The closing song, “Déversoir,” gives a solid sound that is well appreciated to end an instrumental album like this. The keyboards are a lot more audible here and suit the song.

It is always hard to judge an instrumental album. A key element of metal music, the lyrics, are missing. However, there are always exceptions to when an instrumental album can work and this one is the case. Rostres have laid down an excellent album here. Les Corps Flottants is a neat album that a lot of people can like if they give it a chance.

It seems that the Pyrenees Mountains may have played a large part in influencing the music of French duo Rostre on debut release Les Corps Flottants. Hailing from Pau in Southern France, the town rests at the foot of the vast range which acts as a physical border between France and Spain. The seven tracks display a brooding style of post-rock that traverses smooth still mountainous ponds as well as throwing itself off steep peaks into the heavier side of the genre. At first it can be hard to make the climb but if given time this is a very rewarding listen; this isn’t generic music served to you on a platter, it makes you think to find it’s true beauty.

Rostre doesn’t follow the traditional post-rock build and crescendo patterns instead going for a focus on a dark thunderous atmosphere. If you allow yourself to be taken by the music you get a real sense of the environment of the mountains. Opener ‘Les Corps Flottants’ has a rich texture in the ringing guitar and warm crashing cymbals yet the result is a forbearing gloomy track. The first half of the album also seems to be a climb with moments of release as shown in both ‘Exorde’ and ‘Méandres’. It feels like a beaten up old car which made easy work of the rest of the flat French countryside but is now struggling to carry the weight of the music over the first incline. As the car reaches a plateau it is able to open up once more and release some extra power. The music really carries a feeling of space throughout, from its quieter moments to the thunderous, just as you would expect when in the Pyrenees.

Celebrating life on the plateau is mid-point ‘118’, which has a real feeling of recent pg.lost to it. Although it is glorious in its simplicity and beauty it feels as though the song could have been given more room to grow and so can come across like a bit of filler when considered in the scope of the album. As the weather in the mountains rapidly changes so too does the musical atmosphere. ‘Glaire’ opens with a thunderous riff which feels like the dark clouds rolling over before it breaks down to a brooding movement before kicking off again. In a similar way album closer ‘Déversoir’ hits hard but keeps the harsh guitar progressions up throughout the entirety of the song, certainly a great way to end the album.

It may take a few listens to really reach into the music but that becomes the strength of it. This isn’t a record that will just be played a couple of times and forgotten about. I have no doubt there will be a time in the future when I am traversing a mountainous region with drastically changing landscape and be taken back to the tracks on this debut. Sometimes reaping the rewards of music is simple and instant and that is also true here; but if you allow the time to truly explore the music and allow it to surround you the results are even more stunning.

Dynamic French duo ROSTRES present their first full length album "Les Corps Flottants", a journey through turgid sludge, post-rock and shoegaze. Think of a slowed down Pelican or sped up Neurosis and you will have the right idea. These guys create huge atmosphere through pure riffage and towering, crashing drums alone.

The album is fully instrumental as is often the case in this genre but that is not to it's detriment, the dynamics of the performance and at times lyrical lead guitar/synth/even string patterns wandering back and forth across the riff gives the ear everything it could want. This is an exceptional 'post' album with a variety of sounds to both punish and reward the listener! The primary tone here can be defined as 'BIG'. These are towering, monumental riffs supported by thunderous drums and given a sense of space with glittering effect drenched noise, juxtaposed against swathes of open ground, breathing and building room until the next mountain of noise for the listener to climb.

Rostres are: French and fucking impossible to find any pictures of, so a photo of their logo is posted below instead.

I have to be absolutely honest here. I had never heard of Rostres before Metal Gods TV’s resident rock icon Iron Mathew brought them to my attention. Rostres are French, you see, and I may have mentioned once or twice in previous reviews that I am currently trying to destroy the Catholic faith in France. I have to admit basing myself in a rural Breton village was not the best policy for this, as the travel time is prohibitive. Still, it means that the nearest church is at the end of my road…

Rostres are a post-rock band according to their blurb. What the fuck even is post-rock? You’re either rock or you’re not and to suggest otherwise is wankery of the highest level. Post-rock is one of those terms invented by bearded hipster twats in genuine 1960s Levi 501s with plaid shirts, espadrilles and “ironic” Morbid Angel t-shirts to describe their turgid pseudo-wank nonsense and overweening sense of self-importance (I give you the Flaming Lips as an example. No matter how much I love Yoshimi Battles the Pink Robots part I.) Hoofwanking bunglecunts. This is shoegaze and doom. Nothing else. This is fantastically atmospheric metal without the distraction of terrible vocals. This is two guys exploring soundscapes with considerable aplomb and French style. It is unusual and utterly fascinating. The lack of singing allows you to plunge deeper into the music. And plunge you will. It’s an incredibly heavy record, equal parts Sabbath, Tool, Mudvayne and Coheed And Cambria and this fluidity of influences is no bad thing. There’s melody and beauty before the concrete heaviness crushes you. It’s a beautiful grinder, this record. You’ll be reduced to sausage meat, but you’ll revere the music as you go through the mincer. There’s a kind of sharp edged purity to this music that transcends mere genre. It’s powerful and experimental and utterly unexpected for a French band. The French metal scene is still in its infancy and to hear a French band with such incredible chops and individuality is a real treat. The drummer, Lionel, is a metronomic machine of precision and power – and Alain, as both guitarist and bassist is a revelation. The guitar emotes. There is such feeling in the playing of it. It’s heartbreaking or uplifting or crushing or crying or a destroyer or a distortion fuelled killing machine by turns. You could totally imagine Maynard James Keenan singing over this music, but I would have been very interested to hear Francophone vocals over this music because it is consistently splendid. To think that this experimental brilliance comes from such a conservative country as France astounds me. My favourite tune on this record is Glaire. It has a riff of such cosmic singularity I did a sex wee and utterly ruined my trousers.

Don’t get me wrong, there is melody and subtlety in abundance on this record, which is no bad thing, but there are also magnificent, monolithic riffs of sheer electric alchemy. The seamless way in which the two contrasting styles amalgamate is joyous to experience and I don’t think I have enjoyed an instrumental record quite as much as this one in a very long time indeed. The production is sparkling, a crystalline thing of beauty and purity, every instrument shown off to its absolute best advantage and the drumming is just sublime. I don’t think I have heard such a complete drummer since Neal Peart of Rush. If you are a fan of fast, aggressive metal than Rostres are not for you. If you appreciate metal played with aplomb, melody and an eye for the abstruse, then you are going to love Rostres. I do. I have run out of superlatives. Wonderful.

Post rock is something that have been around since the 80s basically with acts like Bauhaus, Joy Division and the likes but it is just recently that I have gotten my ears on the modern form for it in the form of instrumental bands like this that I am listening to right now, ROSTRES from France. In the last couple of months I have stumbled over so many great instrumental acts that I start to wonder if there is some sort of conspiracy towards me, trying to woe me over to the instrumental side of things. But joke aside, I do like the challenge no vocals provide for the mind. You gotta listen intensely when there are no vocals. ROSTRES paint a bleak, yet beautiful picture with their music. Just using guitar and drums they create a canvas so intense that you wish you could be there yourself to wander the same paths the band takes.